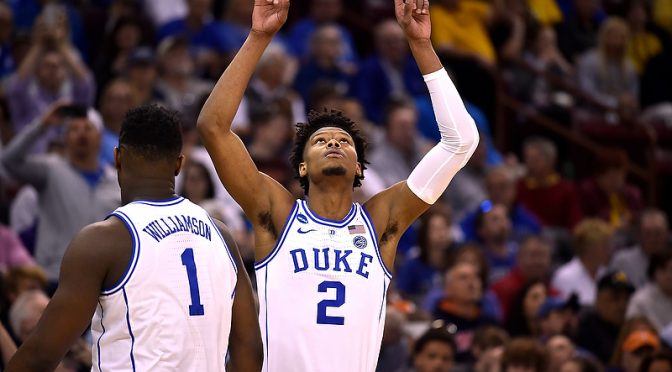 DURHAM, N.C. – Duke freshman forward Cam Reddish has announced that he will enter his name in the 2019 NBA Draft.

An honorable mention All-ACC selection, Reddish completed his freshman season at Duke averaging 13.5 points, 3.7 rebounds, 1.9 assists and 1.5 steals. He made 33.3 percent from three-point range, and was the team’s best free-throw shooter.

“We were honored to have Cam and his family be a part of our program,” said head coach Mike Krzyzewski. “He had an excellent freshman year that was interrupted at different times with nagging injuries. I admired the way he responded and helped us. He has an amazing future ahead of him as a player. We are proud that he was part of a truly spectacular year.”

Reddish was his best in the clutch, draining a game-winning three-pointer before the buzzer to beat No. 13 Florida State in Tallahassee and scoring 16 of Duke’s final 30 points during a furious second-half comeback win at Louisville. He drained a clutch three-pointer in the final two minutes against UCF, helping Duke reach the Sweet 16.

“That feeling of putting on the Duke uniform in indescribable,” said Reddish. “I’ll always be grateful to have been part of such a special season. I would like to thank the coaches for pushing me each day, my teammates for welcoming me into the Brotherhood and the Crazies for the support. I’m looking forward to what’s next, and excited to officially announce I’m entering the 2019 NBA Draft.”

Reddish scored 22 in Duke’s season-opening win over Kentucky, with his career-high of 27 coming against North Carolina in Chapel Hill.

The Blue Devils have had at least one player selected in 31 of 38 drafts under Krzyzewski. Coach K has tutored a total of 61 draft picks since taking over the Duke program, including a Draft-record 38 first-round selections.