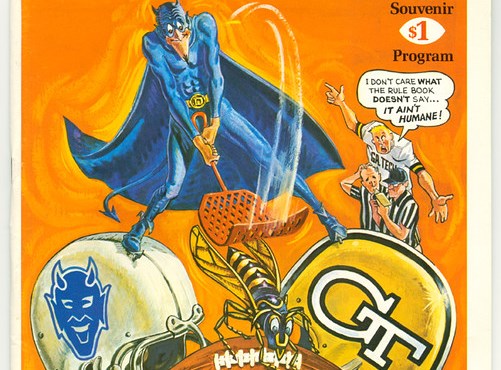 The Duke Blue Devils return to the Brooks field this Saturday to take on the Georgia Tech Yellow Jackets in Wallace Wade Stadium.

Well, those Paul Johnson-David Cutcliffe matchups are over. It may be odd for some Duke fans to not see the full-fledged option attack of the past when Duke faces the Yellow Jackets this weekend.

The Jackets are now led by first-year coach Geoff Collins and they will run a more traditional offensive system. Collins team has some capable defenders but on the offensive side of the ball, they have struggled not having scored over 24 points this season. In fact, at 1-4, they are fresh off a 38-22 loss to North Carolina a week ago.

The key for Georgia Tech will be to try and get off to a quick start against Duke. Teams that have done so, have given the Blue Devils headaches. The Yellow Jackets will seek to control the ball via their run game while hoping their defense can slow down Quentin Harris and the offense.

The Blue Devils must put the Pitt loss behind them and that is easier said than done. A week ago, a horrid start doomed Duke as their comeback fell short in a highly frustrating loss to Pitt where they did not protect their home field.

Duke is a heavy favorite in this game where the line is Duke by 17.5. If the Blue Devils play up to their capabilities, this should be their fourth win on the season. In fact, this is a must-win for bowl hopes in that Duke will be the underdog in most of their remaining games where things currently stand,

The Blue Devils are a pretty good football team, but the aforementioned schedule leaves no room for losing close games as happened a week ago. Duke should be able to slow down Georgia Tech with its defense which had to deal with the offense's mistakes a week ago.

Duke may get out of the gate a little slow but they should shake off the funk of a week ago for the win. The Blue Devils may rest some borderline injured players in this one as well, but they will look to bounce back with a good overall performance. The key will be to not look ahead to a game at Virginia and take care of the business at hand.

I dropped to 4-1 on my straight-up picks and stand at 4-1 vs the spread. I hope to bounce back this week as well. The pick here is Duke 37 Georgia Tech 11