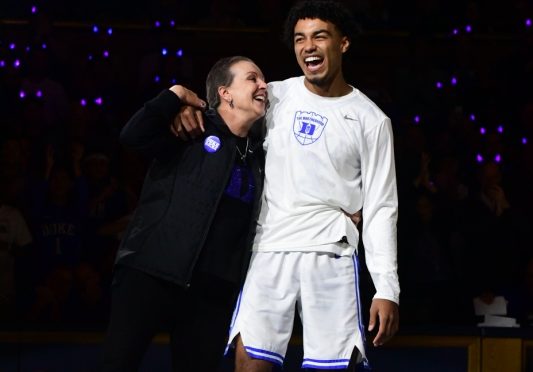 DURHAM, N.C. -- ESPN's College GameDay Covered by State Farm will make its season debut at Cameron Indoor Stadium for the second consecutive year, on Saturday, January 18 to preview that night's showdown between No. 2 Duke hosts No. 13 Louisville.

The traveling pregame college basketball show, hosted by Rece Davis with analysts Jay Bilas, Seth Greenberg and LaPhonso Ellis, returns for its 16th season, beginning Saturday. The morning show will be live from Cameron Indoor Stadium, beginning at 11 a.m. ET on ESPN, before the Blue Devils take on the Cardinals at 6 p.m.

This will be the 11th time Cameron Indoor Stadium hosts College GameDay, two more than Kentucky's Rupp Arena for the most of any venue in the show's 16-year history.

The January 18th matchup will be highlighted by two of the top players in the ACC going head to head in Duke freshman Vernon Carey Jr., and Louisville junior Jordan Nwora. Nwora currently leads the conference in scoring (21.0 ppg), while Carey is third in that category but leads the league in field goal percentage (.628). Nwora and Carey are two of three players ranked in the ACC's top 10 in scoring, rebounding and shooting efficiency.

Iron Duke Parking Lots will open at 7 a.m. ET and operate as normal for guests with a Men's Basketball Iron Duke parking pass.

For guests who do not have Iron Duke Parking, parking for ESPN College Game Day will be free of charge from 7-11 a.m. ET. After 11 a.m., there will be a $10 charge, CASH ONLY. General parking for College Game Day will be available in the general public parking lots on Circuit Drive. A courtesy shuttle will run on a continuous loop from the Circuit Lots to Whitford Drive from 7 a.m.-1 p.m. Accessible parking will be available in the Science Drive Visitors Lot. Lift-equipped van assistance from the Science Drive Visitors Lot to Whitford Circle for access to Cameron Indoor Stadium will begin at 7 a.m.