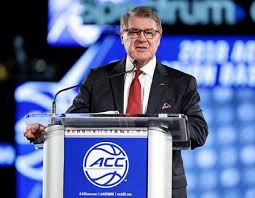 Greensboro, N.C. (theACC.com) – John Swofford, the longest-tenured commissioner in the 67-year history of the Atlantic Coast Conference, announced today that the 2020-21 athletic year will be the last of his 24 years of service. Swofford will continue in the Commissioner’s chair until his successor is installed and will assist with the transition as needed. As the fourth commissioner of the ACC, Swofford guided the league to unprecedented stability, success and growth, expanding from nine to 15 members beginning with Miami and Virginia Tech in 2004, quickly followed by Boston College and later joined by Pitt, Syracuse, Notre Dame and Louisville.

Today’s ACC spans the entire eastern seaboard, giving it the largest geographical footprint and population among all Autonomy 5 conferences. Expansion allowed the league to secure its future through the grant of media rights, creation of the ACC Football Championship Game, an invaluable partnership with the Orange Bowl, and joining with ESPN in August 2019 to establish the ACC Network, which provides fans exceptional access to live events via a comprehensive, multi-platform network.
“It has been a privilege to be a part of the ACC for over five decades and my respect and appreciation for those associated with the league throughout its history is immeasurable,” said Swofford. “Having been an ACC student-athlete, athletics director and commissioner has been an absolute honor. There are immediate challenges that face not only college athletics, but our entire country, and I will continue to do my very best to help guide the conference in these unprecedented times through the remainder of my tenure. Nora and I have been planning for this to be my last year for some time and I look forward to enjoying the remarkable friendships and memories I’ve been blessed with long after I leave this chair.”

Swofford’s impact has been felt far beyond the ACC footprint. He played a key role in the evolution of the College Football Playoff, as well as being a leading advocate for NCAA legislation that allows Autonomy 5 conferences to better address the needs of their institutions, athletic programs and student-athletes. He was instrumental in starting the ACC/Big Ten Challenge, now an early-season staple for both men’s and women’s college basketball, and oversaw the development of the ACC Football Championship Game. During his tenure, he hired the league’s first full-time women’s basketball administrator, started the ACC Student-Athlete Advisory Committee and implemented the annual ACC Mental Health and Wellness Summit.

Over the last 23 years, the ACC has been at the forefront of college athletics, winning 92 national team titles in 19 of the league’s 27 sponsored sports. Beyond athletics, the league continues to set the standard academically by leading all conferences in nearly every comparison. Kent Syverud, Chancellor of Syracuse University and the Chair of the ACC Board of Directors, praised Commissioner Swofford’s character and service.

"John Swofford, in his historic tenure, has come to embody the very best of the ACC,” Syverud said. “The Conference has been dramatically enhanced in every way during the last quarter century, especially in its balance of academics and athletics. All 15 Presidents of the Conference, like their universities, are deeply grateful to John for his transformative leadership.”

A native of North Wilkesboro, North Carolina, where he was a three-sport most valuable player and all-state quarterback, Swofford attended the University of North Carolina on a Morehead Scholarship as part of head coach Bill Dooley’s first football recruiting class. In addition to earning a spot on the ACC Academic Honor Roll as a student-athlete, he started at quarterback as a sophomore and part of his junior year, and then finished his career as a defensive back for UNC’s 1971 ACC Championship team. He played in the Peach Bowl as a junior and the Gator Bowl as a senior.
Swofford received his Master’s in Athletics Administration from Ohio University. His first job in college athletics came at the University of Virginia — where he worked under future ACC Commissioner Gene Corrigan — before returning to North Carolina.

In 1980, at the age of 31, Swofford was named the athletics director at his alma mater. He held that post for 17 years. As athletics director, Swofford’s teams won more ACC and NCAA championships than any other athletic director in ACC history, a record that still stands. In 1994, Carolina won the Sears Director’s Cup, awarded to the top overall athletics program in the nation, the only ACC program to ever win that award.

At the time he became athletics director, North Carolina had not won a national championship in any sport since 1957. The Tar Heels won at least one national title every year of Swofford’s tenure. During his time in Chapel Hill, Carolina’s women’s sports programs soared to unprecedented heights, winning 65 ACC and 17 NCAA Championships. Swofford also hired six head coaches that went on to win national championships. In 1981, he hired the first Black head coach in the ACC.

“To be sure, we are deeply indebted to John and Nora for their exemplary service to the Atlantic Coast Conference membership and every constituent that touches the league. John’s leadership and guidance have been truly astounding and his robust impact on student-athletes over two-plus decades cannot be celebrated enough. He has been a pillar of reason, trust and value while encompassing a contagious passion for unrivaled excellence. Over the course of his storied tenure in the ACC office, John’s steadfast determination and vision have led to countless significant accomplishments and achievements, including membership expansion and the creation of the ACC Network. In short, we have been fortunate to work with one of the finest leaders in the history of college athletics.”
-- Kevin White, Vice President & Director of Athletics, Duke University

“Certainly, John Swofford oversaw and successfully navigated the Atlantic Coast Conference through the most dramatic era of change in its storied history. Since 1997, John worked to represent the best interests of all ACC institutions, now up to 15 after the latest round of expansion, in pursuit of making the league the best version of itself. We wish both John and Nora the very best in retirement and thank him for more than two decades of dedicated service as commissioner of the ACC.
-- Mike Krzyzewski, Head Men’s Basketball Coach, Duke University

“First off, congratulations to both John and Nora on the retirement announcement. For over 20 years, John has guided the ACC through remarkable transformations with the utmost integrity and respect. \His pursuit of excellence for the league’s entire membership has been inspirational, and we thank him for his leadership and service.”

“A hearty congratulations to John Swofford for an absolutely amazing career. Your leadership within the ACC has been nothing short of tremendous. You have led us all through many transitions and much growth. All of us at Duke women’s basketball would like to say thank you. We are grateful for all your efforts and we wish the very best to you and your family for a wonderful retirement.”
-- Joanne P. McCallie, Head Women’s Basketball Head Coach, Duke University