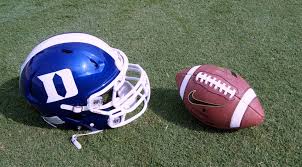 Here is the Blue Devils schedule with an official announced from the ACC.

The Atlantic Coast Conference announced its 2020 football schedule on Thursday. If public health guidance allows, the schedule will begin Thursday, Sept. 10. All 15 conference schools will play an 11-game schedule, with 10 games against ACC opponents and one versus a non-conference program.

The health, safety and well-being of all our campus constituents is at the forefront of all decisions and the schedule announcement follows several months of discussion and scenario planning among the league membership and the ACC’s Medical Advisory Group. The full report from the Medical

As noted last week in the ACC’s announcement on the plans for football and Olympic sports, the 11-game schedule is slated to be played over a 13-week span. Open dates were strategically placed throughout the schedules for maximum flexibility. Each team will play five home games and five road contests in conference play.

The 2020 ACC Football Championship Game will be contested Dec. 12 or 19 at Bank of America Stadium in Charlotte, North Carolina.
ACC play will feature 15 teams and one division this season, as Notre Dame will play a 10-game conference schedule. The Fighting Irish also are eligible to compete in the ACC Championship Game. Game times and television designations will be announced at a later date.

All non-conference game opponents, selected by the respective school, must be played in the home state of the ACC institution, and all non-conference opponents must meet the medical protocol requirements as agreed upon by the ACC.