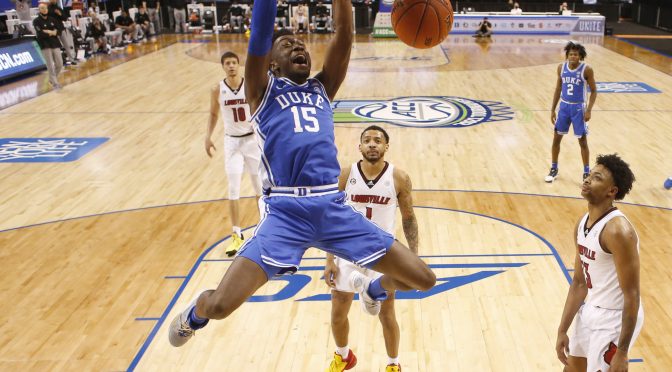 Q. Tonight you set an ACC Tournament freshman record with 19 rebounds in the game. When Coach took you out of the game, were you trying to get number 20?

MARK WILLIAMS: A little bit, but at the end of the day, it's about getting the win. We played really well today, and now it's just on to Florida State.

Q. After having such a game like this, I know it's three games in three days, I know the fatigue factor gets in, but do you feel tired after putting up 23 and 19 tonight?

MARK WILLIAMS: I feel all right right now. But just going to head back, recover, prepare for Florida State tomorrow.

Q. Tell us a little bit about what you guys were talking about at halftime. They had the big run by Louisville late in the first half, and you guys came out and had a good run the second half. What were some of the things you were emphasizing at that point?

MARK WILLIAMS: We just knew it was going to be a fight. We fought for the first 12 minutes and had a little lapse towards the end of the first half. But coming out in the second half, we knew we had to start aggressive and keep our foot on the gas.

Q. How important was Jeremy by knocking down a couple threes in that half to get you some of that margin?

MARK WILLIAMS: He was huge. He made a couple big shots, big plays, so credit goes to him.

Q. It doesn't always seem like you are the most expressive guy on the court, but you had a dunk with about three and a half minutes left that sort of put things away. Can you walk us through what you're feeling in that moment, what that was like for you?

MARK WILLIAMS: Yeah, just expressing some emotion. We lost to that team twice in the regular season, and that feeling hurt. To come out today and play the way that we did, it was fun to play.

Q. What was your team's game plan defensively and how do you think you guys executed so well to be so successful?

MARK WILLIAMS: Yeah, you know, we just watched a lot of film from the first times, made a couple of adjustments. And from there, we made a couple like changes for each player, and it showed good success. It worked out pretty well today.

Q. You guys have played Louisville twice this year. The first game you didn't play, the second game wasn't your best night. Did you feel like tonight Louisville finally got to see kind of what you're capable of?

MARK WILLIAMS: Yeah. You know, I didn't play that first time, but from there, I just had to grow, keep working hard. And then today I just got to show a little bit of what I could do.

Q. Did that feel pretty good to kind of show off and be like, this is what Mark Williams is about?

MARK WILLIAMS: I think it was just more important that we got the win today. We're fighting for our lives at this point, so I think that was probably the biggest thing.

Q. That dunk with three minutes left, that was sort of the last occurrence of when it seemed like Louisville was trying to make it a game. What sort of mindset allowed you guys to sort of respond in that fashion throughout the second half today?

MARK WILLIAMS: Again, I think probably just remembering that we lost to them twice. You know, you don't want to lose to a team three times, so just staying aggressive, keeping our foot on the gas and defending.

Q. A lot of times when we ask teammates about a performance like this, they'll say we've seen it in practice all the time so it doesn't surprise us. 23 and 19 is a different animal. Have you felt yourself capable of something like this in practice and will your teammates essentially say that?

MARK WILLIAMS: Yeah, a lot of my teammates have given me confidence. They know if they hit me that they trust me to make the right decision, whether it's to go up or to kick it out. So I think that really just showed for itself today.

Q. Early part of the game, you had some wobbles from the foul line, and in the second half with the game up for grabs, very much on the line, you set up a knock-down (indiscernible). Just talk about that part of your game.

MARK WILLIAMS: Yeah, I was in a slump early, but Coach just gave me confidence to knock down the next one. At the free-throw line, you've got to clear your head from the last shot and just focus on the one in front of you.

Q. It feels like you're unveiling something new almost every game. This game it was like the one-handed offensive rebound tip. Can you talk a little bit about what you've been doing in practice, and have you been adding new stuff to your game lately?

MARK WILLIAMS: As far as the rebounding is concerned, I think that was more just an effort thing, just attacking the glass. Coach told me attack the glass. I didn't really rebound that well last game, so I had that in the back of my head today.