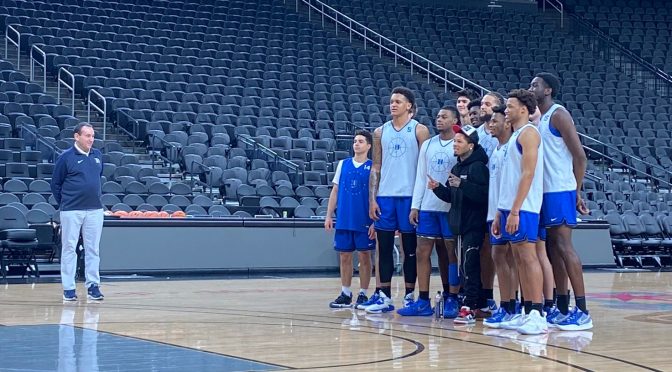 The number one ranked Gonzaga Bulldogs have played consecutive games in Las Vegas on the same court where they'll meet #5 Duke tonight. This is a team that will also be playing in their natural time zone, so those intangibles are perhaps why the oddsmakers have them labeled a 7.5 point favorite over the Blue Devils.

If I am Duke, that spread adds to the many reasons why I think this edition of the Blue Devils will compete hard tonight and why they can win outright. As of now, Gonzaga is deemed near unbeatable, and for good reason. They have looked nothing less than awesomely efficient during their first six games.

I could go down their list of players one by one, for their core group is stellar. But so is Duke's. In fact, I think the Blue Devils match up about as good as anybody could against the nation's top-ranked team.

Yes, Gonzaga is a different beast. They space the floor better than any team I have seen on offense and they defend. They are loaded with confident players playing with immense swagger and they are really, really deep although they have not had to depend on their bench just yet in their wins.

But these Blue Devils can make life a little harder for they are not amused being the underdog. While both programs are elite, big games like this are something the program from Durham has been accustomed to. This is not their first rodeo and they will not be intimidated.

If the Blue Devils can keep this one close in the early stages they can create some game pressure Gonzaga has yet to see. To do that, it will take a complete team effort where everyone who plays does so without hesitation for the bench could get short tonight.

You may notice that I have yet to mention a single player by name on either team. The reason for that is while the game may be won by one of the household names in college basketball to date this is a program game.

This is a matchup of styles, pride and program passion and the side which plays the best as a team will win.

The Zags have been the talk of the town in college hoops but so has Duke with it being the last year at the helm for the GOAT. Win or lose, both these teams win in that this game will provide a lot of answers and or what to work on as a team moving forward.

Should Duke give it their all and lose, the pain of said loss will propel them while providing lessons of what needs to be adjusted to get it right the next time. The same goes for Gonzaga.

There is no reason not to expect some haymakers to be thrown in this game. I fully feel that this game to go back and forth right down to the wire.

In one corner we have the Gonzaga Bulldogs wanting to let the nation know they are indeed the best as they take on all comers. The opposite corner features a Duke Blue Devils team really wanting to erase last season's dip while announcing they are 100% back.

And, yes I just wrote my two cents without mentioning a name on either side coaches or players. That is because this game is more about the name on the front of the jersey and not individuals.

Duke, now an 8.5 point underdog will show up.