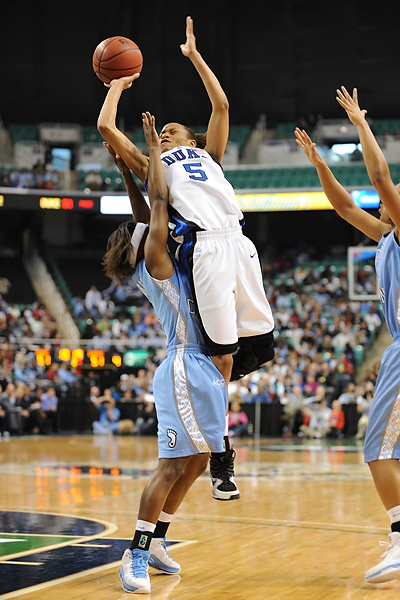 Click on the first thumbnail to see a slide show with full-size images. 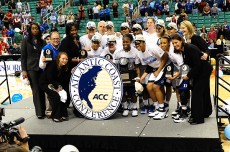 GREENSBORO - The Duke Blue Devils rolled past North Carolina to win their second consecutive ACC Tournament Championship by a score of 81-66 on Sunday afternoon in Greensboro.  Duke was led by tournament MVP Jasmine Thomas who scored 21 points and she was helped by fellow senior Karima Christmas who had 13 points and 9 boards.

But it was the second half play of true freshman Haley Peters that added a huge sprak to the Blue Devils efforts.  Peters knocked down 5 of 6 free throws and scored 14 points, second most on the team to go with 4 rebounds.

"I thought that was the greatest screen  on that play along the baseline where Jazz hit a three and she got the call," said McCallie on a play which Thomas nailed the three and Haley was fouled, went to the line, knocked down two free throws for a 5 point play which in hindsight was a dagger.

"When you sit on the bench, sometimes it's helpful because you can see whats going on out there and see your teams attitude.  When I came in I tried to be an energy player," stated Peters.

Duke had their hands full with Jessica Breland who scored a game high 27 points to go with her 7 rebounds. "I thought we had done a good job on Breland  until I saw here stat line," said McCallie in praise of her play.

Duke had a big lift from the players off their bench, mainly due to the aformentioned Peters where they outscored the Tar Heels 28-12.  The Blue Devils also won the battle of the boards holding a 38-27 edge.

Once again, McCallie utilized here deep bench where 11 Blue Devils got minutes.  This seemed to be a strategic move for the Tar Heels wore down a bit during the stretch run.

"I;m very, very proud of our team, our seniors and the leadership exhibited out there throughout this tournament, said McCallie.  She continued, "We're very excited  to represent Duke and be able to be together and have so much fun."

Karima Christmas joined Jasmine Thomas on the first team all tournament team while Chelsea Gray was named to the second team.  Had the votes not been taken early, you would have likely seen Haley Peters name as well.

Duke won their seventh tournament title, all since the year 2000.  Duke now holds a 5-3 advantage when playing North Carolina for the title.  The Blue Devils have also played in 10 of the last 12 finals, a testament to the programs strength.

The win pushed the Blue Devils record to 29-3 on the season and they were rated as the second best team in the RPI rating before the game. Duke must now wait two weeks for the NCAA selection show to learn of their next opponent and that game will be played in Cameron Indoor Stadium where Duke hosts a first round regional. 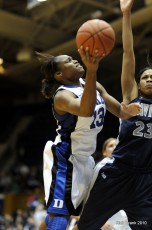 GREENSBORO - The Duke Blue Devils are headed to the ACC Tournament Championship game with74-66  a victory over a pesky Georgia Tech team.  The Blue Devils dominated the paint area outscoring the Yellow Jackets by a 28-16 margin in the paint.

The Yellow Jackets cut a large Duke lead down to 2 with 7:10 left, but Duke bounced back on back to back baseline buckets from Karima Christmas and Haley Peters  and then another Christmas lay in and then one from Thomas which sparked an 8-2 run and that edge carried the Blue Devils through to victory.

Karima Christmas had a monster game for the winners throwing in a team high 20 points to go with 6 rebounds, 2 steals and 2 assists.  When Duke needed a bucket or a play she seemed will to take on that role.

The Blue Devils came out red hot in the first half shooting an impressive 68,2% from the field and that effort ranks 7th in the schools history.  Duke enjoyed a 13-5 edge off turnovers as well despite the Yellow Jackets vaunted press.

Jasmine Thomas added 12 points, while Chelsea Gray tossed in 10 as the only double figure scorers save the aforementioned Christmas.  Once again, Coach P played 10 players but her bench got a bit shorter via minutes played for some players which is a combination a shortened bench and match ups.

With the win Duke goes to 28-3 on the season and they play the winner of the North Carolina-Miami game at 1:00 p.m. on Sunday.  That said, let's have a nice turnout to support the Blue Devils in Greensboro tomorrow.

Check back for videos.  We had a hard time downloading them in Greensboro but will try when we get to Chapel Hill for tonight's men's game.

The Duke Women earned a share of the ACC Regular Season Championship with a 66-58 victory over arch rival North Carolina before a sold out crowd in Cameron Indoor Stadium.  The win pushed the Blue Devils overall record to 26-3 going into this weeks Atlantic Coast Conference Tournament in Greensboro, N.C.

While this would not be Karima Christmas, Jasmine Thomas and Krystal Thomas's last game in Cameron due to hosting the first round in the NCAA Tournament, it was their last regular season game.  That meant senior day speeches and as always they were heart felt and emotional.

The Blue Devils also took turns cutting down the net as they celebrated the victory but you could tell this wasn't the net they coveted and Coach McCallie otherwise known as Coach P, alluded to that on the post game press conference.

As for the game itself, the Blue Devils found themselves trailing at the half to the pesky Tar Heels who rolled out to an early 15-8 lead.  Duke settled down after the half and their defense allowed them to take a 38-37 lead on a Karima Christmas three pointer and the Blue Devils never trailed again.

Jasmine Thomas gave Duke a commanding 56-42 lead on a three pointer of her own at the 9:42 mark and that allowed them to cruise to a 66-58 win.  Thomas led Duke with 17 points and 5 assists to go with 2 steals.

But it was Karima Christmas who posted a double-double of 14 points and 10 rebounds and 6 assists of her own.  Fellow senior Krystal pulled down a game high 13 rebounds and you'll see her in the videos below.

Duke got a spark from Allison Vernerey too, where she tossed in 11 points making and grabbed 6 rebounds and swatted back 2 shots on her birthday.  Shay Selby played with an edge adding 7 points as did freshman Tricia Liston.

Chelsea Gray who is healing an ankle sprian tried to make a go of it but wasn't successful.  She is now day to day but expected to play in the tournament.

Duke outscored North Carolina 26-16 in the paint and outrebounded their rival 52-46.  The win was the 23rd in a row in Cameron Indoor Stadium where Duke went undefeated this season.  Duke will now take on the winner of the Virginia-Wake Forest winner  having won the tie breaker and earning the number one seed.

Check out the raw but emotional videos below -

The Duke Blue Devils will take on the North Carolina Tar Heels in a sold out Cameron Indoor Stadium on Sunday afternoon and that will be the final regular season game for Krystal Thomas.  BDN caught up to senior big this afternoon and chatted with her about the regular season finale. against their arch rival.  In fact, Coach P makes an impromptu appearance  in the video which is cool.  See it for yourself and link it for all Duke Women's Basketball fans to see.  A side note, come out to the game despite the sell out for there should be a few tickets outside the arena.  If Duke wins, they are the regular season champions and those who make the game will experience something really cool which I will keep quiet for now.

DURHAM - The fifth ranked Duke Women's team settled in after a slow start to defeat a pesky Brigham Young team 69-54 in the season opener for both teams.  Karima Christmas led the way offensively for the Blue Devils tallying 20 points to go with 7 rebounds.

Jasmine Thomas started the game 0-7 from the field but hit the first two buckets of the second half and the rest of the Blue Devils played off her spirited play. Thomas finished the game with 14 points and scurried her way to a team high 11 rebounds.

Duke opened up a double digit lead early in the half, but BYU refused to fold cutting the lead to 6 with just over 12 minutes to go. But Chloe Wells and Jasmine Thomas sparked a run and suddenly Duke was up 60-43 with 4:04 to go.  That sealed the deal for Duke who coasted to a win after wearing down the visitor.

The Blue Devils dominated the paint where they out-rebounded the Cougars by a 52-37 margin and 28-2 scoring edge.  Duke also got help from Kathleen Scheer who scored 13 points and grabbed 8 rebounds.  She switched positions in the off season and looks at home in the power forward slot for Coach P's team.

Sidebar -The Blue Devils are nursing several injuries and Shay Selby sat out the contest.  Coach P was pleased with her teams defensive effort during the post game press conference and the play of true freshman Chloe Wells.  Duke next takes on Southern Cal this coming Monday in Cameron Indoor Stadium with seat available.  Coach P said that aggressive play and making things happen would earn players time on a deep team.  Coach also said that Duke will be better against the press as the season progresses and that she was excited about this teams potential.

Game Notes - Duke won it's 19th straight season opener and improved to 2-0 all time against BYU.  Jasmine Thomas posted her third career double-double.  Kathleen Scheer got her first collegiate start and had a career high 8 boards.  Chloe Wells and was the first Duke freshman since Abby Waner to start as a true freshman.  Karima Christmas scored 20 or more points for the 4th time in her career.  All five members of the #1 rated recruiting class played in the game for the Blue Devils.