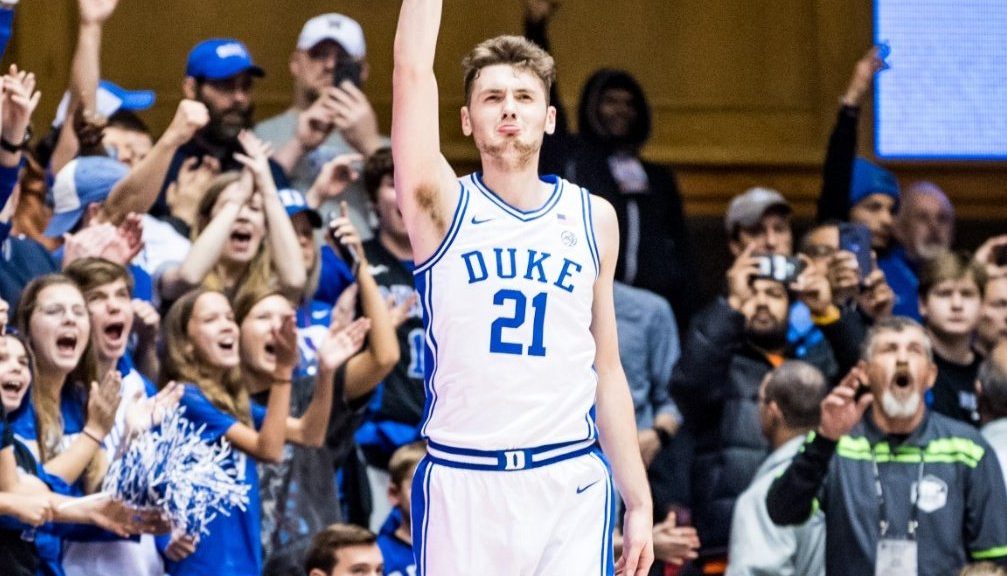 The Duke Blue Devils moved to 2-0 in the ACC and 12-1 overall with an 88-49 win over Boston College in Cameron Indoor Stadium. It was the Blue Devils 300th win to close out the decade.

Duke came out of the locker room with their ears pinned back and played lockdown defense. By the time the dust cleared on the first-half the Blue Devils had a commanding 45-19 lead.

It was the 13th win in ACC openers for Duke Coach Mike Krzyzewski. Duke rolled out to a lead at the half behind a strong defensive effort.

Matthew Hurt got the start today and he did not disappoint as he scored 20 points to lead the Blue Devils in first-half scoring. He would end the contest 25 points breaking his old high mark and earned praise from Krzyzewski who said he was getting a little stronger as the season progressed.

The return of Tre Jones certainly helped with ball distribution where he tallied 10 assists. Krzyzewski said he had not been playing a lot n practice while resting his foot and he was impressed he logged 24 minutes of gameplay.

Duke came out on fire in the second half as well forcing a Boston College timeout after back to back dunks from Vernon Carey and Alex O'Connell. Those two buckets gave Duke a 30 point lead with 16:12 to go.

The Blue Devils would stretch that lead while playing several players in the process prompting Krzyzewski to say once again that this is like an old school team that played its depth.

It was a day when Duke's younger players played older and advanced their games. It was exactly the kind of play you want to end the decade and a successful one at that for the program.

Duke outscored the Eagles 32-16 in points off the bench and 18-10 off turnovers. The team also has an impressive 7 blocked shots while limiting the visitors to 3 of 18 from the three point stripe.

The Blue Devils converted on 12 of 28 three-pointers on their own and went 6-9 from the free throw stripe. Duke placed just two players in double-figures but everyone contributed at some point in the game with balanced scoring.

The nation's number two ranked team will not travel to Miami this Saturday for a 9:00 start. They will then travel to Georgia tech for a 9:00 start on January the 8th before returning home on the 14th to take on Clemson.

Durham, N.C. - BDN caught up with Mile Plumlee after Duke defeated Boston College 79-59 on Wednesday evening.  Plumlee went 5 of 6 from the field for 12 points and pulled down 5 rebounds in 19 minutes of action.