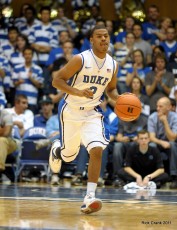 After a scoreless first half against the Spartans, the Hyattsville, Md., freshman guard went 6-of-6 from the field (1.000) with a pair of three-pointers in the second half. Cook added two assists and one steal in only 18 minutes of action for the seventh-ranked Blue Devils.

Duke returns to action on Friday, Dec. 30 with a 7pm home contest against Western Michigan. The game will be televised by ESPN2 as the Blue Devil look to extend their home winning streak to 42 consecutive games