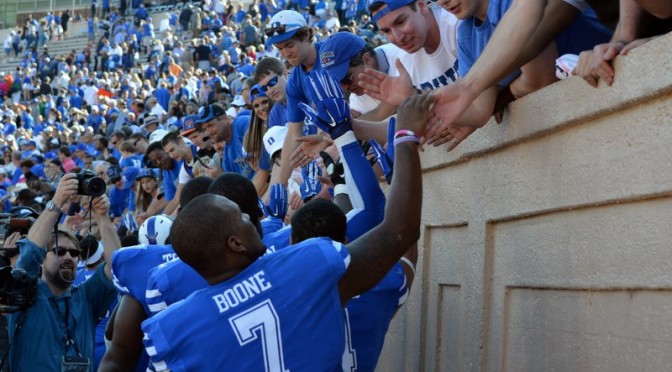 DURHAM - Duke RB Shaquille Powell led two second-half scoring drives for the Blue Devils in their 20-13 victory over Virginia. Powell, who missed last week with a leg injury, returned to finish with 6.2 yards per carry against a highly-touted Virginia front seven. He received a standing ovation in the post-game locker room from his teammates for his efforts in the midst of his younger brother's battle with a Wilms' tumor.

Senior quarterback Anthony Boone led Duke to yet another victory, moving to 16-1 as a starter in regular season games, moving him to second on the Blue Devils' all-time list. He finished the day 22-37 for 176 yards and 1 toucdown, and perhaps most importantly, led the Blue Devils to no turnovers on the afternoon.

Senior WR Jamison Crowder once again led the Blue Devil receiving corps with 88 yards on 8 catches. He has had at least 2 catches in 35 straight games. He joined Conner Vernon and Clarkston Hines today in the 3,000 yard receiver club at Duke.

The game ball today probably is split between the aforementioned Powell and the Blue Devil offensive line. Entering today's game, Virginia was among the top defenses in the country, forcing 19 turnovers, 23 sacks, and 43 tackles for loss. On Saturday, they finished without a single turnover, sack, or tackle for loss. Duke averaged 5.2 yards on the ground, nearly twice the season average of Virginia's opponents entering today. Senior OL Takoby Cofield discussed the big victory and bowl eligibility.