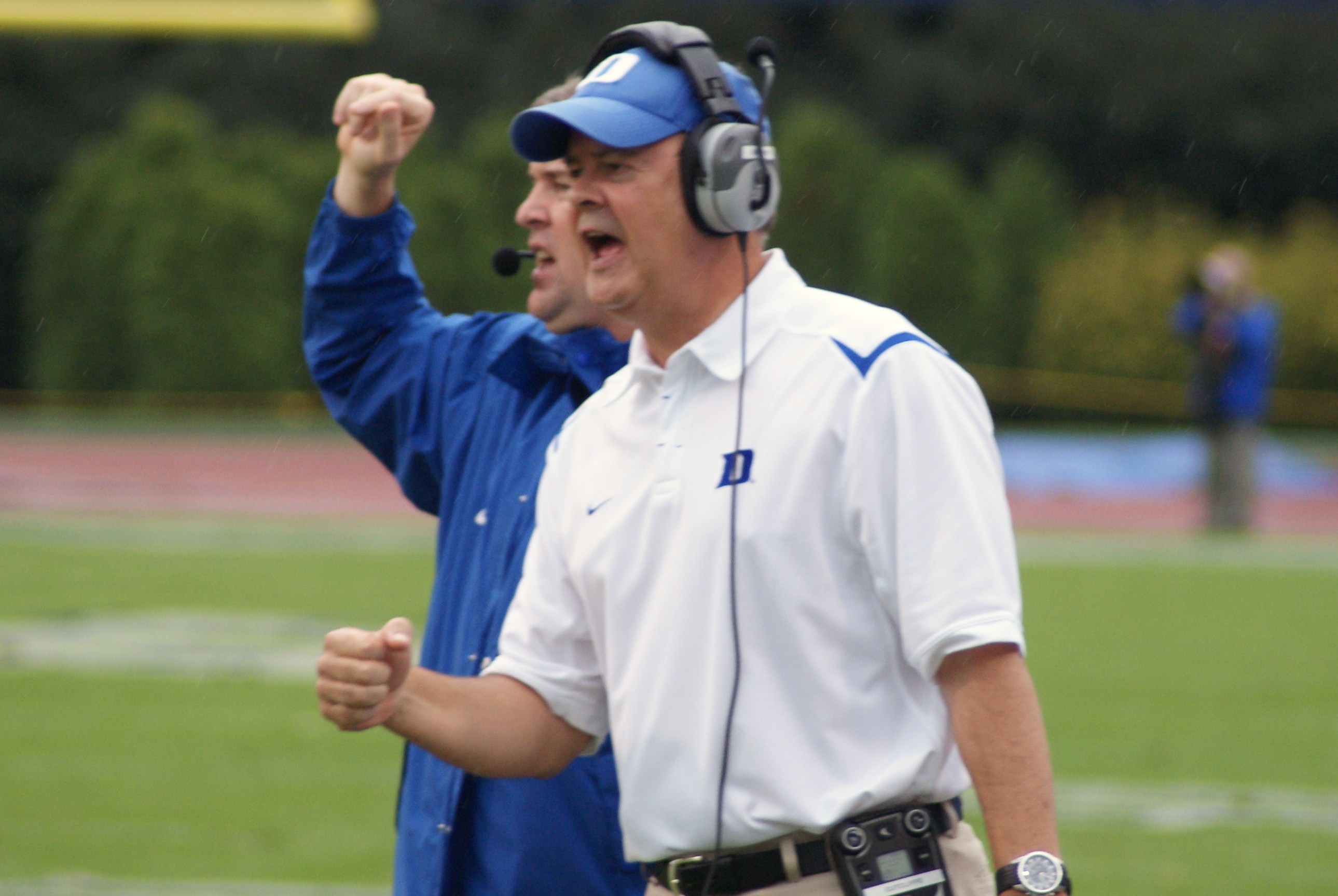 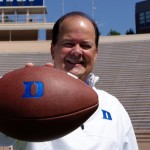 This is the thing -- the benchmark. This is where you find out what kind of program you've got. Our guys have practiced hard. We'd better, because we're going to be in for a big challenge, obviously, this Saturday night.

Q. Bud Foster and obviously the stability that he's brought to the defensive coordinator's role, you had some stability there with Coach Knowles. How would you evaluate how you guys have transitioned with Ben and Matt in those roles this season?
DAVID CUTCLIFFE: Well, it's a unique circumstance, and I realized that as I did an evaluation -- Jim Knowles and I talked a lot about this when Jim -- when he was offered the job at Oklahoma State, he and I were on the road together recruiting. You know, I did a lot of thinking.

But the reason that we went co-defensive coordinators is the quality of the people that we have in Ben and Matt and the quality of the rest of the staff, Derek Jones and Lanier Goethie. So we're at a point where we're still growing in that regard, but we clearly defined their roles. It is a transition, but our players were very familiar with both coaches. We have had a lot of stability in this program, so that helps a great deal.

We certainly wouldn't be the same without Jim Knowles. There's no question about that. But we have continued to try every year to grow and build on what we're doing, and I think Ben Albert and Matt Guerrieri have done a great job of doing that.

Q. Is one of the biggest challenges they and you have faced is the injury situation in the secondary, just having to plug different guys in and switch roles and such?
DAVID CUTCLIFFE: Yeah, it was the most unique thing. It started, obviously, at Northwestern, and then it escalated at Baylor. It's been unique. It's a great tribute to our assistant coaches. They've recruited well. We do have some really good young players in the secondary, and they're performing at a high level. They hopefully have -- when you come in here, you develop great practice habits, and so if it does happen, that makes it a little easier to adjust.

But very proud of our -- not only our staff in that regard but proud of our players, you know, just managing adversity. And there will be more to come, not only here playing football but in life. I am proud of them. We've just got to continue along that path.

Q. I'm writing a story about the nomadic lifestyle of assistant coaches, and wondering if there isn't a little bit of a trend toward giving a little more security to assistants by longer contracts, and a second part of the question, do you think there's -- have you ever seen anything really unusual happen within the style of jumping from one program to another?
DAVID CUTCLIFFE: Yeah, I think it's been a long-standing trend for certain people. When I was a younger assistant, a young assistant at the University of Tennessee, we were working without contracts, period, not one year. Just no contract. We had a pretty revolving door. I was there for 17 years, and the number of different assistant coaches that I worked with was in the upper 30s.

I never -- I think that's sometimes personal preference. I think there are a lot of people -- I think it's problematic to people because I do think, and I tell young coaches this all the time, be where your feet are. I've known a lot of people in the industry that were always trying to get the next job, spending more time trying to get the next job than doing a great job with the one they've got.

I do believe that if you have assistant coaches that are committed to your program, they're doing what they should be doing, I think they should earn longer term contracts. Two- and three-year contracts are becoming more commonplace. Buyouts are now more commonplace for assistant coaches because with that security goes a price with it, and if the university is going to commit to that, most universities now are going to require some form of buyout where people don't just jump.

So it's an interesting era in football. It's changed quite a bit since I got into it.

Q. Anything really unusual that stands out to you that happened along the way, like owning three houses at one time or --
DAVID CUTCLIFFE: Well, I mean, I can tell you this: It was interesting, guys I worked with that came from California that sold houses were shocked what they could buy out east. They were in mansions in my mind. That certainly happened. But I know Derek Jones on our staff, between being a graduate assistant for us at Ole Miss and then kind of jumping around, he had a couple of homes and was -- you're trying to lease homes and you're not there, and it certainly can end up being a nightmare.

I've always -- I guess maybe I'm just old-fashioned, but I've always liked being in a place, particularly when our children were young, trying to raise our children in some form of normalcy. So it's an interesting study. I think that's a great idea to write an article about.

Q. If you look at the way they struggled defensively in the secondary against Old Dominion, when you're looking at that, are you seeing schematic breakdowns, guys just getting beat, or what did you make of that?
DAVID CUTCLIFFE: Well, I would say for the biggest part, it's an outlier, and that's taking nothing away from ODU. Good gracious, they made great plays and they were ready and well-coached. But everything just kind of fell right. I mean, literally just fell right. You hate to call anything luck, but it was like, okay, you play zone, they scrambled and then just found a way to make a gain to keep a drive alive. You play man, the ball just dropped down right in the exact right spot. I mean, it literally was like that.

I've watched Virginia Tech defense for a long time now. It is storied, as we all know, its excellence in athletes, its excellence in coaching strategy and scheme. So it's just one game. Really, honestly, that's the honest answer I can give you.

Q. As you watch them, No. 94, their defensive end, who they dismissed from the team, are there moments that you're prepping for a game and you see him and think, man, I'm glad he's not going to be somebody I have to deal with?
DAVID CUTCLIFFE: Well, I've got too many -- there's 10 others, 11 others that you're worried about. I think he was a really fine player. I don't know the young man at all. But there's no question he was an outstanding football player.

Q. I'm just wondering if there's maybe a right word or description to kind of nail down the energy or vibe amongst your guys just going into a national TV game? I'm sure they obviously know what's at stake, but if there's one thing you've taken away from their energy this week.
DAVID CUTCLIFFE: Yeah, I think that's a really good point because I have watched it. I think our program has grown from different points where we had big games that you worried about getting too hyper, too into the moment as opposed to preparing for a ballgame. I think right now what I would say is focused. These kind of games should create focus, but that's what I've seen, and hopefully that carries over into Saturday night.