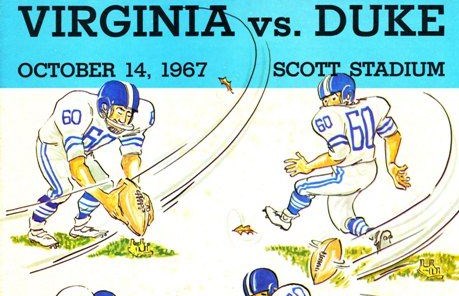 The Duke Blue Devils travel to Charlottesville this Saturday to take on the Virginia Cavaliers. Make no mistake about the fact that this is a huge game for both schools in the highly competitive ACC Coastal Division.

In fact, it is fair to say that both the Blue Devils and Cavaliers are at a season crossroads. The winner will very much be in the thick of the race, while the loser will need plenty of help to get back into contention.

Both teams come into the contest at 2-1 in the league and 4-2 overall. Duke wasted a golden opportunity to be in control of the division with a recent home loss to Pitt before bouncing back against Georgia Tech, a team that is at the bottom of the standings.

Virginia (4-2) has lost two games in a row to Norte Dame and Miami, but the Cavaliers have been ranked for much of the season. They also hold a convincing win over Pitt on the road and defeated Florida State at home.

Duke has lost three consecutive games to Virginia under Bronco Mildenhall; each in frustrating fashion. The Cavaliers made Daniel Jones look like a player you would never guess left school early and starts for the New York Giants. They feasted off his passes for record turnovers, so, hopefully, the memory of the struggles is enough to get Duke better prepared.

Making a case for Virginia to win

Bronco Mildenhall has had the Blue Devils number since he took over the Virginia program after leaving BYU. The Cavaliers have played with confidence in the series where their defense has stymied Duke in their previous matchups. They will seek to carry that over in this game.

While the Cavaliers have most recently lost their best defensive player in Bryce Hall, the defense should still be quite stingy. If they set the tone early in this game, they could allow their offense which has struggled at times with their offensive front to flourish against what many consider a lesser opponent than their last two opponents.

If Virginia establishes a running game, an area where they have struggled, it could be a long day for Duke. What you can count on is a staunch passing attack where playmaker Bryce Perkins throws to receivers with both size and speed. Wideouts Joe Reed and Hasise Dubois have the potential to thrive against a Duke secondary that has a single interception this season.

Another area where Virginia may flourish on the defensive side of the ball is the play of solid linebackers Zane Zandier, Charles Snowden and Jordan Mack. All three of these players are in the top four for team tackles.

Making a case for Duke to win

The law of averages is on the Blue Devils side. After dropping four straight to the Cavaliers, Duke hopes to get back to its winning ways where David Cutcliffe owns a winning record in the series.

Duke has distributed the ball to many players on offense and that will be a key in this contest. If Duke can establish some sort of running game versus the 13th rated defense against the rush in the land it should allow for Quentin Harris to make some plays downfield.

The Blue Devils have been solid on defense at times. If they get after Bryce Perkins and then neutralize his running ability, it will bode well for the team. They are capable of stacking the box and shutting down the run game.

Duke has been solid in the kicking game this season as well where AJ Reed has not missed a field goal. While Reed has tried just eight attempts, he is perfect thus far.

This game could go either way. That is obvious on paper where Virginia opened as a 5.5 point favorite which has dropped to 3 as of today. Whichever team can execute for four quarters will likely win for a slow start in this game may spell doom.

In a close game, turnovers will loom large, so whoever wins that battle may come out victorious as well. In my mind, the team that scores four touchdowns will win. FWIW, UVA is undefeated at home and 4-0 when they score 28 or more. A missed or even a made field goal may play a big role in a game that will come down to defense.

It makes sense to pick UVA to win if for no other reason than their recent success in the series where the two teams have played every year since 1963. They are also playing at home and they were the preseason pick to win the division by the media as well.

On the other hand, Duke once again has an opportunity to remain in or tied for first place. And that is something to play for. It will require a terrific effort to win this game and hunger for accomplishing that will come into play.

I stand at 5-1 straight up and 5-1 against the spread for the season. I will be the first to admit I would not suggest wagering on this game nor do we promote that with our picks. The against the spread picks are for entertainment purposes only.

That said, I must make a pick in a game where intangibles will rule. Here it goes ...Virginia 28 Duke 23 I think the Blue Devils may lose a heartbreaker in the 4th quarter.

The homer pick in me says the Duke defense will stand tall and the Blue Devils win 24-21. It could happen.