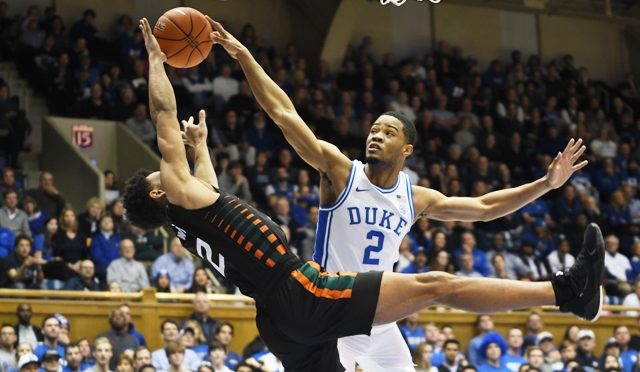 The Duke Blue Devils are coming off a needed break and will return to the court tomorrow evening in a 9:00 game versus Pitt in Cameron Indoor Stadium. The Blue Devils halted a two-game losing streak with an 89-59 win over Miami in their last outing which pushed them to 6-2 in the ACC with and 16-3 overall.

Duke head coach Mike Krzyzewski has deep ties with USA Basketball and his experiences have allowed him to meet legendary players. Kobe Bryant was one of those players. The sad news of his passing brought about an official statement from Krzyzewski which you can read on the site. With three daughters of his own, the former Olympic coach can certainly relate to the pain the Bryant family must be feeling as the nation mourns the tragedy. We can likely expect some more comments from Krzyzewski during today's press conference and after tomorrow's game.

Taking Advantage of the Break

The schedule allows for little spare time moving forward but Duke likely made some adjustments after a week-long break. Duke should be a better team for many reasons. The first, of course, is the health aspect. Some Duke players have been battling injuries or nagging ailments. The break should have allowed time for Joey Bakers' gimpy ankle to heal. We are also one week closer to the return of Wendell Moore Jr. Mike Krzyzewski has ruled him out versus Pitt but he is getting closer to returning. Duke is at it's best when they have their full roster and Krzyzewski hopes the team's health remains intact as they build chemistry for the final run in the conference. The staff also likely tweaked a few on-court things with two losses still close in their rearview mirror.

Duke is currently ranked 9th in the nation in the new A.P. poll falling one spot behind Villanova this week per the media. The Blue Devils can win games and not move up as quickly as some may want in that the teams ahead of them have favorable schedules in some cases. Anyone who has seen Baylor knows they look the part of number one and I cannot see but one team challenging them in the Big 12. Gonzaga has entered its conference season, so that means less than stellar competition. What I am getting at here is that Duke will have to scratch and claw its way to a top-two seed in the NCAA tournament where two teams are locked in already. Rankings basically matter for tournament seeding and fan pride but the key is to navigate your way to be playing your best ball at years end. Duke may not be a top-two rated team again this regular season, but they should be able to secure a good seed if they play to their potential.

The Blue Devils staff knows that continued learned maturity and playing together is the key to success. They hope to see consistency develop over the last 12 regular-season games. Duke needs to get a little better at the free-throw stripe for this to happen. The Blue Devils are 11th in the league from the charity stripe at under 70% which is generally considered the minimum desired. But Duke leads the league in scoring, scoring margin and they are 4th in scoring defense. The Blue Devils also are tops in field goal percentage going into tomorrow's game with Pitt. Individually, Duke places two players in the league top 25 scorers. Vernon Carey (16.9) is 4th in scoring while Tre Jones (14.9) comes in at 11th. Tre Jones remains the league lead in assists with just under seven per contest.