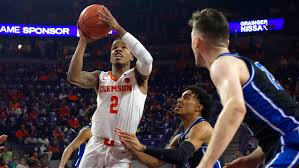 There are times when the intangibles help align an evening in a way that an upset is possible. In hindsight, the intangibles were hard to ignore with the Clemson win over Duke last evening.

The Tigers were coming off one of the biggest wins in their program's history over North Carolina in Chapel Hill to end one of the more embarrassing streaks ever. That kind of thing has a way of carrying over not only for the season but especially for the next game.

While football is indeed another sport, the Clemson faithful were as down as could be after their team lost the national title game to LSU the night before. This provided extra incentive to ease the pain for the home team and to their credit, they played their best game of the season.

On the Duke side of things, it was announced that Joey Baker would miss the game with a sprained ankle just hours before the game. This coupled with the fact that Wendell Moore Jr. was already sidelined immediately changed the complexion of the game.

Duke had just gotten adjusted to missing Moore when they had another key cog in their rotation go out. And that folks, will mess with chemistry, substitution patterns, etc.

Once the news of Baker being out broke, people began to take a closer look at an 8-8 Clemson team. I speak for myself here in that I started to realize this game was a trap. The Tigers had a win over N.C. State, UNC and TCU which is atop the Big 12. In other words, they have been sneakily getting better while most were unaware of their progress due to a slow start to the season.

Add to all this that Duke went cold from the free throw stripe in the second half, while missing easy lay-ins and you could see the pattern develop in real-time as the Blue Devils suffered their first ACC loss of the season.

Duke was not especially sharp on the defensive end. Part of that was due to a lack of depth they have become accustomed to having and that made for some tired legs after pressing to get back in the game after a fast Clemson start.

The Blue Devils would also need for all eight of their rotation players to step up and that did not happen as well. Players who have been playing well disappeared under the pressure and it was clear the team struggled to find a way to stop a red hot Clemson offense nor did they match their opponents' emotion on this evening

To their credit, the Blue Devils would fight back into the game and they had a chance which is something. But things will get tougher this Saturday when Louisville comes to town and the Cards will look to derail the Blue Devils on ESPN Gameday in Cameron,

In the end, what we have is a typical ACC upset when it seems like the world aligns against one side. Upsets will happen, especially in league play and the ebbs and flow of the season mean injuries and unexpected situations will occur.

All the Blue Devils can do is learn from the game. They're a young team that had been playing great basketball until last evening. Overreacting to the loss would be silly in a January game and a look around the nation shows several teams stumbling.

On the other hand, Duke is facing adversity as they face Louisville this weekend in a most important game. Injuries are a part of the game but they come at a bad time for Duke which now has to limit players in practice.

One thing is certain though. If Duke is to get back to their winning ways against Louisville all eight rotation players must show up and contribute. The game with Louisville will be the ESPN Gameday game of the week. That contest will tip at 6:00 on ESPN and we will learn a lot about the Blue Devils by the end of the evening.