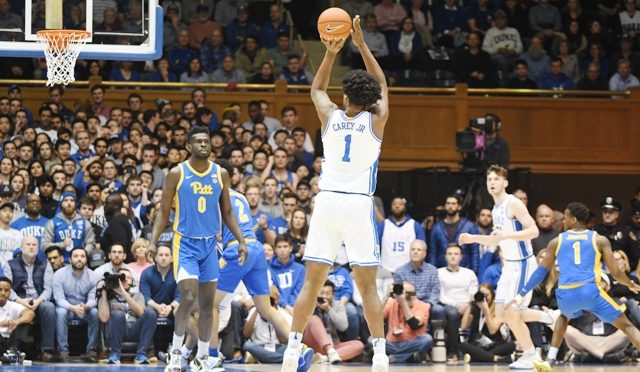 Duke freshman Vernon Carey Jr. has been named ACC Player of the Week and ACC Freshman of the Week after averaging 26 points and 15 rebounds in leading the Blue Devils to conference wins over Pittsburgh and Syracuse.

Carey scored 26 points in both victories, shooting 11-of-17 from the field with 13 rebounds and a career-high four assists in Tuesday night's win over Pitt. At Syracuse on Saturday night, he grabbed a career-best 17 boards and went 9-of-14 from the field and 8-of-10 at the free throw line. Carey's 17 rebounds against the Orange matched Adonal Foyle and Patrick Ewing as the most by a visiting player at the Carrier Dome.

The native of Miami, Fla., now has 10 double-doubles this season, with each having been 15-10 games and eight 20-10 efforts. The eight 20-10 performances trail only Iowa's Luka Garza (10) for the most by major conference players.

The Blue Devils continue their three-game road on Tuesday, February 4, when they take on Boston College at Conte Forum at 7 p.m. ET on ESPN. - Duke Sports Information