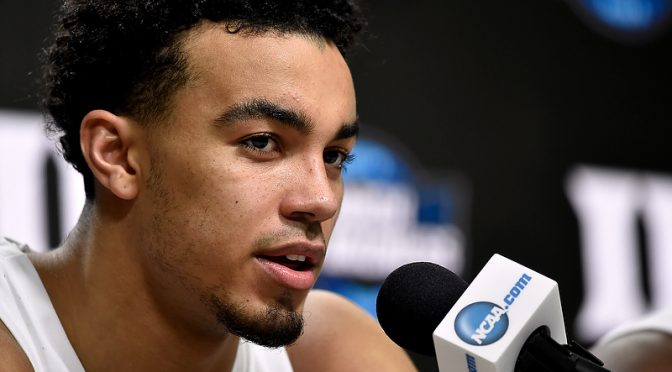 DURHAM, N.C. – Duke sophomore guard Tre Jones has announced that he will enter his name in the 2020 NBA Draft.

Named both the ACC Player of the Year and Defensive Player of the Year, and an Associated Press All-American, Jones was the floor general for the Blue Devils in each of the last two seasons. The sophomore team captain, who is also a finalist for the Bob Cousy Point Guard of the Year Award and the John R. Wooden Award, and a semifinalist for the Naismith Defensive Player of the Year, ranked sixth in the ACC in scoring (16.2), second in assists (6.4), fourth in assist/turnover ratio (+2.4), sixth in steals (1.8) and 11th in field goal percentage (.423). He was the only player ranked in the league's top 11 in each of those categories.

"When I started my journey at Duke my main goal was to win a National Championship," said Jones. "Given what has had happened in our world recently, our season was cut short and we never got the opportunity to bring No. 6 back home. I think about what if, what would have happened if we got that chance? But I can't think about what didn't happen, I can only think about what did happen. What did happen was the amazing experiences and relationships I gained with my brothers, the knowledge I received from Coach K and all of the Duke staff to become a better player and person, and the endless support from the Crazies and all the Duke fans. Duke has taught me what it means and what it takes to be the best at what I do. My journey is just getting started. As I look to begin my career at the next level I will always and forever cherish everything Duke."

Jones, a native of Apple Valley, Minn., was Duke's starting point guard on last season's team that won the ACC Championship and reached the Elite Eight, earning ACC All-Freshman and All-Defensive honors. He averaged 9.4 points, 5.3 assists and shot .414 from the field. Returning for his sophomore season that was ended abruptly, Jones upped his averages to 16.2 points, 6.4 assists and .423 shooting on his way to becoming just the second player in ACC history to sweep the Player of the Year and Defensive Player of the Year Awards in the same season.

He leaves Duke as the program's career leader in assist/turnover ratio at +2.87, while ranking third all-time in assists per game (5.8) and fifth in career steals per game (1.83).

"This is such a special moment for Tre and his family," said head coach Mike Krzyzewski. "I couldn't be prouder of what he accomplished this season as both the ACC Player of the Year and Defensive Player of the Year. He's been the heart and soul of our program over the last two seasons, and it's been a joy for me to watch him develop as a player and leader. There aren't many as competitive as him, and I know the best is yet to come. I want to thank Tre for being such a pleasure to coach, and I wish him nothing but the best as he pursues his NBA career."

The Blue Devils have had at least one player selected in 32 of 39 NBA Drafts under Krzyzewski. Coach K has tutored a total of 64 draft picks since taking over the Duke program, including a draft-record 41 first-round selections.