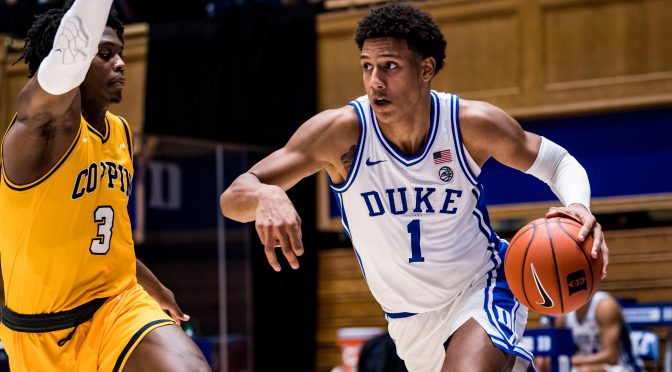 The Duke Blue Devils will try and build on their recent home win over Georgia Tech when Clemson (10-4) invades Cameron at high noon (12:00, ESPN 2) tomorrow.

The Blue Devils are in the midst of a major learning curve where they are now taking situations one step at a time. So, the focus should be solely on a good Clemson team and nothing more.

Duke is learning how to win. As odd as that may sound to fans, the truth of the matter is this team has yet to be consistent or show dependability.

We saw signs of the group coming together against the Yellow Jackets. While it took the majority of the game, Jalen Johnson started to co-exist with Matthew Hurt. And that is a good sign for the staff, for these are the two guys which make the Blue Devils hum.

But as close as Duke may be getting to consistency from Hurt and Johnson at the same time the backcourt has been inconsistent as well. Duke is getting some top-notch scoring from D.J. Steward, but he has not jelled completely with fellow freshman Jeremy Roach.

With Roach still learning the point guard position at the ACC level, Jordan Goldwire has stepped up admirably. But Duke flat-out needs all three of these guys to play off each other better moving forward for they are about to face some good backcourt in league play.

So, with Clemson coming into Cameron as your morning ends tomorrow, Duke is still in the progress of learning on the fly and coming together. When we start seeing those passes zipping a bit more to teammates and better movement together, you will see more wins.

All games, especially home ones are important moving forward for the Blue Devils. At this point, there are not absolute must-win games but losses are devastating to a 6-5 team that has some missing games via lost scheduling. And that hurts national perception by taking away what may have been three or four more non-conference wins.

Duke has also had a lot of inconsistency from players off the bench. We saw some good minutes from Mark Williams in his last contest, but not mentioning various players' names, the cast has had little consistent success when entering games.

The Tigers are coming in off a win over Louisville which ended a three-game skid. Before that skid, the Tigers were red hot with wins over Florida State, Alabama, Purdue on their resume. So, they are tested and have confidence after righting the ship with the recent win.

The game we will likely see is a low scoring grinder. And that means points will be at a premium. And that further means, Duke needs to get out on the break when possible and hit their shots.

Duke will also need to foul less as they did against Georgia Tech, for putting teams on the free throw stripe at an alarming rate has led to losses.

Nothing will come especially easy for this team but they are showing signs of getting "it," better. It meaning playing a little older and bigger than you are both mentally and physically. When you start thinking less and acting more good results will follow. But this requires good and consistent habits to achieve.

As for the game? Duke can win but they have to get into a good flow early and a quick start would surely help.