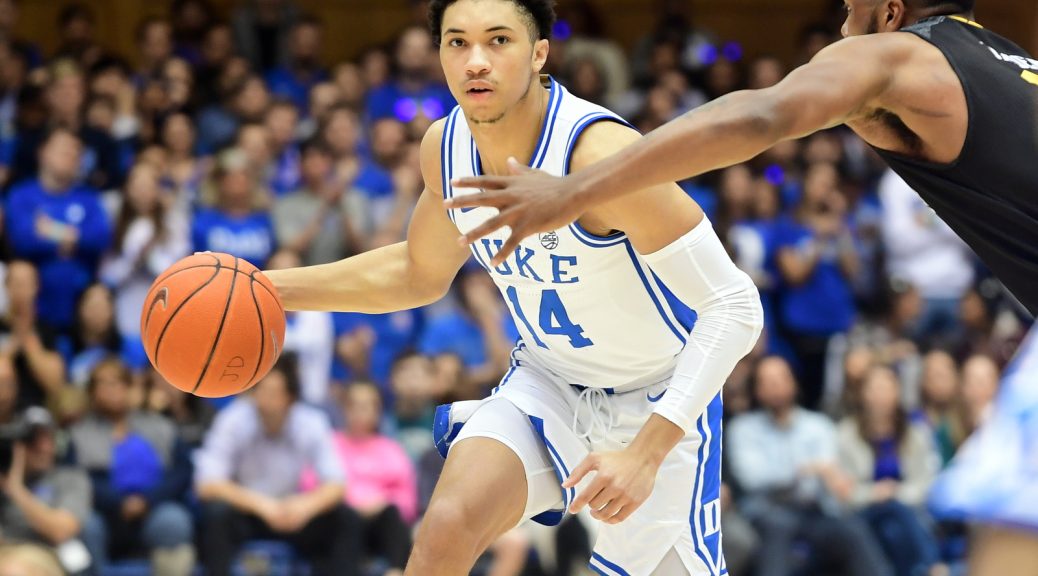 It may not seem like it but the Virginia Tech Hokies have defeated Duke the last three trips to Blacksburg. A wall of students in one endzone will bring their A-game as Duke plays their second true road game of the young season. And let's not forget that Duke won by a mere basket in last year's NCAA Tournament over their conference foe.

Get to Know Nolley

Lander Nolley II is a scoring guard which stands 6-7 and is averaging 20 ppg. He is a redshirt freshman, meaning he is an older player and destined for getting some votes for not only All ACC but is in the running for freshmen of the year.

Virginia Tech shocked Michigan State and whipped Clemson in Littlejohn to open the season. What you will see in their team is a guard-heavy group of players who like to spread the court and relocate the ball quickly. They can also throw out a good press. Virginia Tech has a nine-player rotation and seven of the nine are guards.

Vernon Carey Jr. has had a fabulous start to the season. Everyone should know he is a lottery pick by now in next year's NBA Draft. Duke should be able to post him up often against a team that boasts two frontcourt players which stand 6-5 P.J. Horne and 6-10 Jonathan Kabongo who is averaging just ten minutes per game, Vernon Carey is tied for the nation's lead with seven double-doubles to date.

In my humble opinion how these teams come out of the gate or at games start will dictate how this one goes. Virginia Tech has had a lot of time to prepare for Duke where they last played on November 27th. They will try to push the ball early on a Duke team coming off an emotional victory.

ACC Schedule is 20 Games This Season

A lot of fans are still unaware that the Atlantic Coast Conference has implemented a 20 game schedule this season. This means some interesting scheduling where Duke gets a single day off after their trip to UNC before taking on Florida State. There has never been a single day turnaround after the Duke-UNC regular-season series that I can remember. Duke has had little time to put the win over Michigan State to bed going into this game.

Duke has a nice long break after tonight's game where they return to the court on 12/19 against Wofford. Look for the Blue Devils to go all out knowing this. Cassius Stanley has not been ruled out of this game and seems to be ahead of schedule.

The Hokies are 6.5 underdogs per Vegas. A win for Duke tonight puts them in an eight-team tie for the ACC lead at 1-0. A loss puts them in a seven-way tie for last place.

Duke needs a win to keep its A.P. top ten rated streak alive. A victory would also push the team back towards the end of the top five in rankings which means very little in early December yet is still the desired result.

Over the last few months no one has blown up more than Brewster Academy big man Mitch McGary. McGary, who was sporting quite the tan from his recent trip to Florida, has jumped up in many rankings as a top 5 player in the country. Unfortunately for Mitch an injured ankle hampered him for much of the week here in L.A, but he still managed to be a part of two of the more memorable moments this week. On Friday night McGary gave every Derrick Williams fan a new poster as the #2 overall pick in this year’s NBA draft threw down a dunk of epic proportions on . Fast forward to Saturday’s warm up before the Elite 24 game at Venice Beach, McGary went up for a routine dunk, hung on the rim slightly and eventually shattered the backboard glass resulting in cuts on his neck, hands and left shoulder. He was all smiles about it though. There did not seem to be any intention to break the glass on Mitch’s end, it just happened to be one of those rare freak moments in basketball, but hey, everyone loves seeing the glass shatter. Mitch gave up a few minutes of his time to chat with BDN on his time at the Elite 24. (Note - BDN Premium is running a membership special this week where you will get the best discount of the year.  Go to the join page and take advantage of 15% off a yearly membership.)

BDN: Is this your first trip out to L.A?

BDN: How was the [private] Midnight Run on Friday night?

MM: Well I got dunked. (laughs)

BDN: No big deal, anyone who tries to play defense has it happen.

BDN: You seem like you’re hobbling a bit, what happened there?

MM: I got a bummed ankle, I sprained it about three weeks ago. It’s still not the same. I can’t really move that well on it yet. I think it’s just a high ankle sprain, it’ll be alright in a month or so.

BDN: You think you’ll give it a go on Saturday?

MM: Oh definitely. You have to. That’s what I came out here to do!

BDN: How was it playing with the pro’s?

MM: It was pretty cool. It was exhilarating because you don’t usually get to do that so I was excited to play against them. And of course I got dunked on by Derrick Williams (laughs). Pretty bad but I’m being a good sport about it and accept it. I get dunked on all the time.

BDN: What was the most difficult aspect of playing with the pro’s?

MM: It was good. The coaches there are pretty chill I liked them a lot. The campus is beautiful and some of the facilities and stuff like that. I’ll probably go down there for an official just to get more of a feel of the school and stuff. The girls are pretty hot.

BDN: You seem to have gotten a pretty good tan.

BDN: You’ll be visiting UNC and Duke basically back to back. Will one be an official and the other unofficial? Or will both be official?

MM: Both will be official visits.

BDN: What does Duke have planned for you when you get there?

BDN: How are you approached by Coach K? Has he said things you want to hear?

MM: I mean every coach tells you what you want to hear. I prefer coaches that actually say the stuff that is the truth and..

BDN: More beneficial to you?

MM: Yea. I like to know what I have to do to play. I know whatever school I choose I’m not gonna go there and be a 30 minute+ player a game unless I work at it. I don’t deserve that just going in there.

BDN: Do you feel you’ll make a decision in the early or late period?

MM: Probably this winter before the season starts, or maybe I’ll wait until the normal signing period I’m not sure.

BDN: There’s been a lot of NBA chatter lately about you. Have you given this any thought?

MM: Not really, it’s in the back of my head. I didn’t know it was even possible until I..

BDN: Someone had brought it up the other day and it just blew up.

MM: Yea it blows out of proportion. People start talking and saying I said certain things. I haven’t talked to anybody about it, you’re the first person I’ve talked to about it. My coaches have talked about it. I’m just going to play it by ear and continue to get better..

BDN: Something sort of just in the back of your mind? Not a major focus?
MM: Yea not at all. I mean I want to go to college and get a four year degree, that’s one of my major goals.

BDN: Have you been working on anything this summer with regards to offense or defense?
MM: I really haven’t been doing much this summer I’ve just been playing a lot..

BDN: Not much time to actually refine your skills..

BDN: What do you feel is the next step in advancing your game?

MM: Once my ankle heals up probably defense and some lateral stuff but that’s just for my body and stuff like that. I gotta work on my body a lot more. But more or less my mid-range jumper. My forms a little funky right now, I’m just trying to figure it out and go back to how I use to shoot.

BDN: Much appreciated, Mitch.
MM: Thanks a lot. [/private]