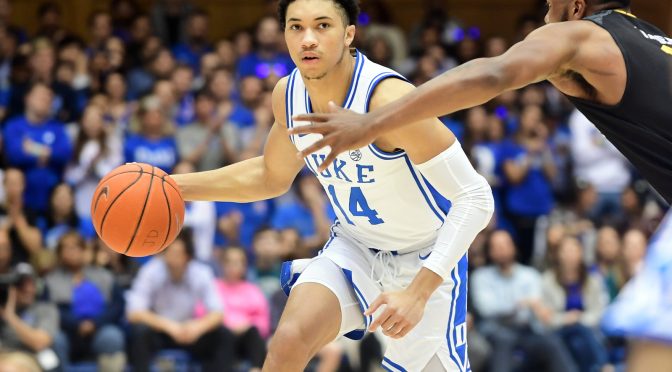 It may not seem like it but the Virginia Tech Hokies have defeated Duke the last three trips to Blacksburg. A wall of students in one endzone will bring their A-game as Duke plays their second true road game of the young season. And let's not forget that Duke won by a mere basket in last year's NCAA Tournament over their conference foe.

Get to Know Nolley

Lander Nolley II is a scoring guard which stands 6-7 and is averaging 20 ppg. He is a redshirt freshman, meaning he is an older player and destined for getting some votes for not only All ACC but is in the running for freshmen of the year.

Virginia Tech shocked Michigan State and whipped Clemson in Littlejohn to open the season. What you will see in their team is a guard-heavy group of players who like to spread the court and relocate the ball quickly. They can also throw out a good press. Virginia Tech has a nine-player rotation and seven of the nine are guards.

Vernon Carey Jr. has had a fabulous start to the season. Everyone should know he is a lottery pick by now in next year's NBA Draft. Duke should be able to post him up often against a team that boasts two frontcourt players which stand 6-5 P.J. Horne and 6-10 Jonathan Kabongo who is averaging just ten minutes per game, Vernon Carey is tied for the nation's lead with seven double-doubles to date.

In my humble opinion how these teams come out of the gate or at games start will dictate how this one goes. Virginia Tech has had a lot of time to prepare for Duke where they last played on November 27th. They will try to push the ball early on a Duke team coming off an emotional victory.

ACC Schedule is 20 Games This Season

A lot of fans are still unaware that the Atlantic Coast Conference has implemented a 20 game schedule this season. This means some interesting scheduling where Duke gets a single day off after their trip to UNC before taking on Florida State. There has never been a single day turnaround after the Duke-UNC regular-season series that I can remember. Duke has had little time to put the win over Michigan State to bed going into this game.

Duke has a nice long break after tonight's game where they return to the court on 12/19 against Wofford. Look for the Blue Devils to go all out knowing this. Cassius Stanley has not been ruled out of this game and seems to be ahead of schedule.

The Hokies are 6.5 underdogs per Vegas. A win for Duke tonight puts them in an eight-team tie for the ACC lead at 1-0. A loss puts them in a seven-way tie for last place.

Duke needs a win to keep its A.P. top ten rated streak alive. A victory would also push the team back towards the end of the top five in rankings which means very little in early December yet is still the desired result.