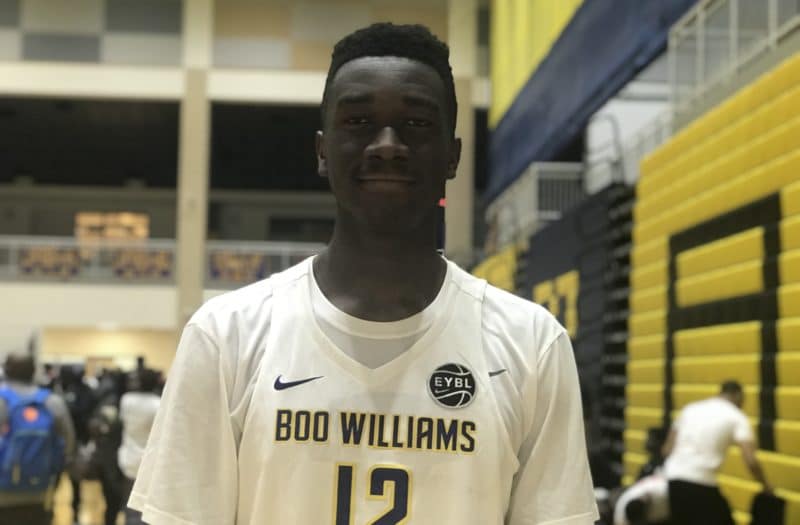 Standing at around 7 feet tall, Williams is one of the top centers in the 2020 class. He transferred to IMG Academy for his senior season where he will play alongside Blue Devil's verbal commitment Jalen Johnson.

Williams is from Norfolk, Virginia and he played for Boo Williams in the Nike EYBL summer league circuit. For those wondering, that is the same program that produced former Duke player and national champion Andre Dawkins.

While there is already a familiarity with the campus and program, Williams will get the Duke staff's undivided attention and their vision on how he can help with the future of the program.

Williams will attend the exhibition game with Northwest Missouri State. The Blue Devils entertained Hunter Dickinson the week before which are the last two offers currently on the table for next year's class.

For more on how things will shake out, join Blue Devil Nation during our 60.00 for one year special for a stright-forward take on the latest happenings.

• Jon Sciambi (play-by-play) and Hubert Davis (analyst) will call the game for ESPNU.

• Duke is the only team in the NCAA to rank in the top 5 in RPI, Strength of Schedule as well as the AP and ESPN/USA Today Coaches Poll.

• The Blue Devils are currently 5-0 on the road in league play. Duke hasn’t won six straight ACC road games since the 2005-06 season.

• Duke and Boston College have met 15 times heading into Sunday’s game with the first meeting between the two schools coming on Dec. 21, 1979.

• The Blue Devils lead the all-time series 13-2, including a 9-1 ledger since Boston College joined the ACC.

• Duke has won four straight and 12 of the last 13 games in the series.

• Mike Krzyzewski is 12-2 at Duke against the Eagles, including a 4-1 record at the Conte Forum.

• Seven of the 10 games since Boston College joined the ACC have been decided by 10 points or less.

• All five games in the series that have been played at the Conte Forum have been decided by 10 points or less.

• Duke and Boston College have met twice in the ACC Tournament with Duke winning both games.

l The Blue Devils are 9-2 in ACC play and are one win shy of winning at least 10 conference games for the fifth straight season and the 20th time under Mike Krzyzewski.

l Duke has been ranked in the top 10 of the AP Poll for 89 straight weeks, the third-longest streak in NCAA history.

l The Blue Devils have had 10 or fewer turnovers in five ACC games and leads the conference with 10.1 turnovers per game in league play. Duke had a season-low five turnovers in Thursday’s win over N.C. State, including no turnovers over the final 13 minutes of play.

l Duke is 12-3 on the year in games decided by 10 points or less. The Blue Devils have five wins in ACC play by less than 10 points.

l The Blue Devils have held seven of their 11 ACC opponents to four three-point field goals or less. ACC opponents are shooting just 28.4 percent (44-of-155) from three-point range against Duke for the second lowest percentage in the conference.

l The Blue Devils average 25.1 points per game off the bench. Duke has gotten double-digit scoring from the bench in 19 of 26 games this season and the bench has scored 30 or more points in 10 games.

l Austin Rivers was named ACC Rookie of the Week for the seventh time overall and the fourth straight week on Monday. Rivers’ seven selections are the third most in ACC history, while his four straight selections tie three others for the ACC’s longest streak.

l Brothers Mason and Miles Plumlee combine to average 17.9 points and 16.3 rebounds per game this season. Either Mason or Miles has led Duke in rebounding in 24 of Duke’s 26 games. The duo has also combined for 19 double-figure rebounding games on the year.

l Seth Curry has scored in double-figures in five consecutive games and is averaging 18.6 points per game in that span. He is 16-of-37 (.432) from three-point range and is also averaging 4.4 rebounds per game in the last five contests.