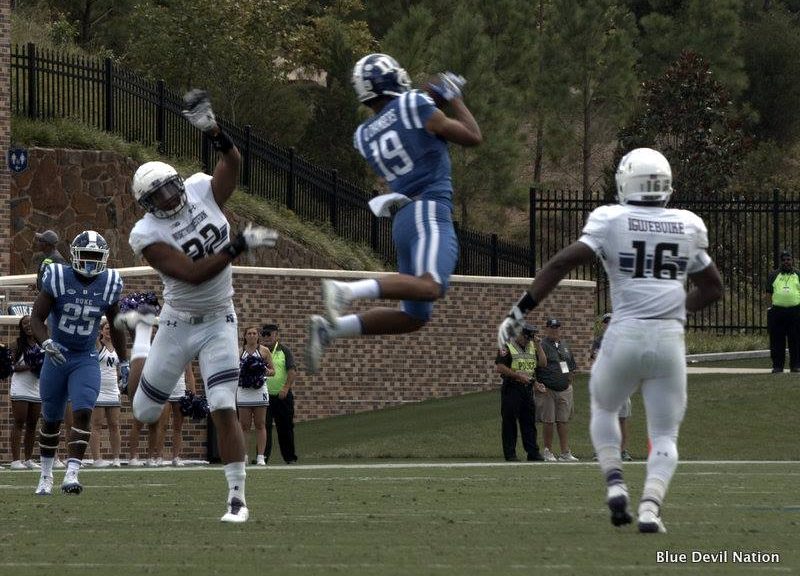 One team is hot and one team is not.  Duke is off to a 2-0 start with impressive wins over NCCU and Northwestern.  Meanwhile, Baylor has yet to find itself after two upset losses under new head coach Matt Rhule.  Duke has been labeled a 14 point favorite which seems a bit high to some.  Baylor was picked in the top 40 by three pre season publications and Phil Steele had their team units ranked quite high in his magazine in the Big 12 conference.   The bottom line is that this is a bit of a trap game against a team that has talent but has yet to put it together.

Many are quick to discount the Bears due to their early season struggles.  But a closer look shows that talent is still there.  Like Duke, Baylor is playing a lot of true freshman this season.  The numbers are similar with the Blue Devils playing 11 to the Bears 13.

The Bears will switch quarterbacks this week to a more pro style passer.  Zach Smith takes over and he has had success leading the Bears to a bowl win over Boise State a season ago.

Baylor has been a victim of mistakes.  Turnovers and penalties to be exact.  The thought is if they can reverse that trend they will be able to show off their talent which lurks below the surface in the results.

According to the Waco Tribune, Rhule plans to let the offense loose this week against Duke after playing a conservative game plan in weeks one and two.

Duke is off to a great start and the fan base and team are looking forward to each week with great anticipation.  Duke has already won half as many games as last season and they seek to keep the momentum going against Baylor.

The Blue Devils are getting great effort on both sides of the ball.  On offense, Daniel Jones is blossoming into a bright young star at his quarterback position.  His ability run and throw has been an early season key.

Duke is also getting better play on the offensive line and from its wideouts.  In short, the offense has been consistent to date while not allowing opposing defenses to key on any one area of the game.

The Blue Devils have been better on defense as well.  They totally handled the Northwestern run game a week ago by allowing one of the Big 10's best back his career low.  The youth in the secondary has yet to be exploited and the kicking game, while not perfect is better as well.

Duke has also benefited from better coaching where the staff has shown more continuity.  The Blue Devils are hell-bent on returning to a bowl game this season and seem focussed on the job at hand.

Baylor is a dangerous team.  All they are hearing is how disappointing they've been to date, so there is a gathering behind the wagons feel to their team this week.  If they see some early success, they could be, pardon the pun, a Bear to handle.

Duke will look to take advantage of a banged up Baylor secondary. The defense must pressure the quarterback while not allowing speedy skilled players to make big plays.

Baylor will give their best effort of the season and will be pumped up playing an ACC team which is considered the favorite.  Duke will have to be aggressive on the offensive end and score some points to win.

I have been all over the place with how I think this game will go. Baylor has a lot more speed than Northwestern and are the underdog in a most dangerous way,  Duke on the other hand has been very efficient but how will they respond if there is adversity?

If the Bears cut down on mistakes and Duke makes some, this could be a close game.  If Duke plays mistake free football, they should come away from the game 3-0.    There is a part of me that thinks Duke will win easy and another part that thinks this is the trap game of the season.  I am going with the good Blue Devils with few turnovers, but the game could be much, much closer than my pick.

HOUSTON - Coach Krzyzewski is quick to tell you that his assistants, Chris Collins and Steve Wojciechowski, make up the scouting reports for future opponents, and it is no different with Baylor.  Both coaches checked out the Bears' easy win over St. Mary's last evening, and who better to talk to about the next opponent than Chris Collins himself?  BDN caught up with Coach Collins for a one on one chat about the game.

HOUSTON - Kyle Singler addresses the constant questions of expectations.  Kyle stated he would design another shirt if they get to the Final Four as well.  The Duke team watched film this morning and just finished up practice about thirty minutes ago.

HOUSTON - Prep yourself for an information overload, for the Blue Devil Nation has several interviews coming your way from today's press conference and open locker room.  BDN takes you behind the scenes to bring you the best coverage on Duke Basketball available on any site.  Jon Scheyer talks about Baylor just before the team hit the practice court, and where they happen to be as I type.  Enjoy and check back often and join BDN Premium for full site access.  Next up - The three freshmen share their thoughts on being one game away from the Final Four.

HOUSTON -  Shooters just keep shooting and that's exactly what Jon Scheyer did on Friday evening.  After scoring just 2 points in the first half, Scheyer tallied 16 in the second for a total of 18 points and that helped Duke defeat a game Purdue team 70-57.  Scheyer tied Nolan Smith with 4 assists as well, and it was obvious that there was a sense of relief in the face of the senior captain.  BDN caught up to Jon for a one on one in the Duke locker room and, as you will hear, we were rudely interrupted by a reporter asking Jon about a "meltdown."  I had just asked Jon what it was like to field questions from people who had done little homework on Duke.  Before he could answer, a reporter asked Jon about the same thing that made Coach Krzyzewski bristle during the post game press conference, yet she seemingly got no hint how silly her questions were.  At that point, I just rolled my eyes and turned the recording off as Jon himself gave me a little smile as if he were saying, "oh well."  It was as if the TMZ had invaded the Duke locker room.  Anyhow, it is disturbing how little some of the media seems to know about Duke basketball and its inner workings but, hey, they all can't be BDN, right?  I will have more on the media angle later today as we continue to churn out a plethora of interviews from Houston.  In short, BDN is on the scene once again to bring you some of the very best coverage available.  That said, listen to the  interview for yourself and check back often as we'll be adding quite a bit today.  Just press play below -