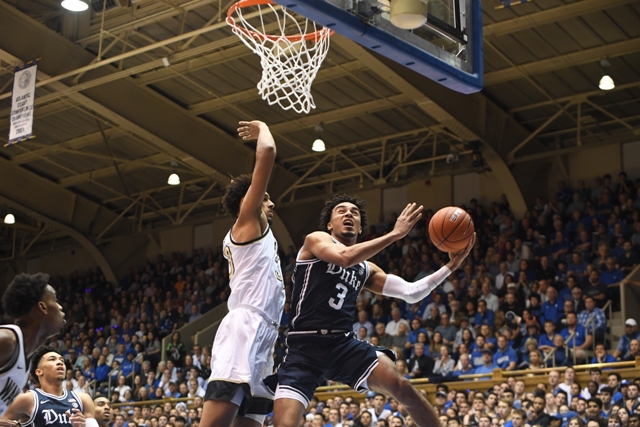 Looking Back at the win over Wake

Duke played some very good basketball in the teams 90-59 win over Wake Forest in Cameron Indoor Stadium this past Saturday. During the contest, the team wore their Brotherhood jerseys made special for the program.

The uniforms were a hit as was the play of the Blue Devils which pushed their ACC mark to 5-0 on the season while going to 15-1 overall. In short, Duke looked the part of a highly ranked team.

Tre Jones who has been named to the John Wooden National Player of the Year Watch List with teammate Vernon Carey Jr, led Duke with 23 points and his steady play has been a major key to success.

The Blue Devils had contributions from nine players as the rotation continues to go deep. While the offense was majorly efficient in the 900th win in Cameron Indoor Stadium, the play of the defense was just as solid where Duke had 11 steals to go with 8 blocked shots.

The win was the 9th straight for the Blue Devils the polls dropped them one spot this week to the nations #3 rated team in the polls. During the postgame press conference, Duke coach Mike Krzyzewski praised his teams' effort and focus in the win over Wake.

Looking Ahead to Clemson

The Blue Devils travel to Death Valley to take on the Clemson Tigers this Thursday at 7:00 on ESPN. They will be playing the Tigers the day after tonight's national championship football clash with LSU.

Duke will also be playing a Tigers team that ended the ACC's most dubious streak with a win over North Carolina in their last outing. In fact, this will be the second straight opponent Duke has faced after they defeated the Tar Heels.

The Blue Devils should be able to handle the Tigers which evened their season record to 8-8 in their last outing. Duke has enough depth to wear down the Tigers but Krzyzewski knows they'll be riding high and tough at on their home court.

The Tigers are a good defensive team and ranked 6th in the league in scoring defense. They will try to slow the Blue Devils down from pushing the ball down court In fact, they will try to play the game in a muck.

Clemson has not been able to shoot the three-point shot with consistency to date. As long as Duke pushes them off the stripe as they did the Demon Deacons, they should win. And it most certainly helps if Duke continues to hit their own three's as they have of late. 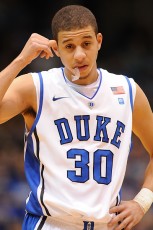 DURHAM - The sign of a good ball player is one who can bounce back from a bad game and sophomore Seth Curry did just that.  Curry added some much needed offense to the Blue Devils effort, thus helping themgo to a 13-2 record.

The three Duke seniors addressed the media this afternoon in Cameron Indoor Stadium and BDN was on the scene and brings you videos of each player.  The Clemson game will be the final time Kyle Singler, Nolan Smith and Casey Peters.  First up is Kyle Singler -

[private]So, after a tough loss are you guys ready to go?

Yeah!  We don't hang our heads on Sunday.   We looked at the film and saw plays we should have 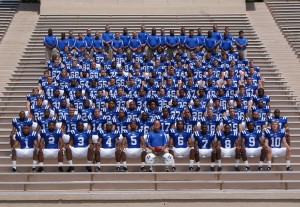 made.  On Tuesday, it was on to Clemson.  Sometimes we can't see it, but coach will point it out and we go back to work on it.

I can't wait to get there ... I can't wait.  Those guys!  They're good athletes and being in that arena energizes me - the hostile crowd and people booing you.  We hope to make it a one dimensional game and shut them down.

I've watched them on film and they're big.  I don't look at it like they're too big to handle.  It's going to be a physical game and we can be successful at the line of scrimmage.  You hit some people and they start putting it on the ground.  It's going to be a fun game.

Will teams take Duke lightly now that they are under .500 for the first time this season -

What one thing stands out that you have learned as a player this season?

Being a more aggressive player.   You've got to get to the ball.  If there is a screen you've got to run.  So, getting to the ball.  Coach always says if you run to the ball and the ball pops out you have a chance at the recovery.  This is something I try to hold myself to, so that I can impact the game.

What are the seniors talking about?

All of our seniors know what the deal is.   We talk to each other in practice and say, hey this is it, just three more games.  I've been playing football for thirteen years and now I have three games left and that's not promised to me.  I have been playing this game for a long time, all the seniors have.  So we give it everything we've got in practice and leave it all on the field.  Come Saturday, it's time to show up.  The schemes are set and it's up to us and you have to be ready.

How important is student support to this team?

It's important.  We love the students and their support.  It helps a lot to know they are up there.  I know the Carolina game is over Thanksgiving, but I hope they turn out.  We need them to turn out.  I'm pretty sure the people of Durham will be there.  I've had people I haven't talked to since I was twelve years old, so my last game?  It's going to be fun.  But, Clemson is next and first things first.[/private]