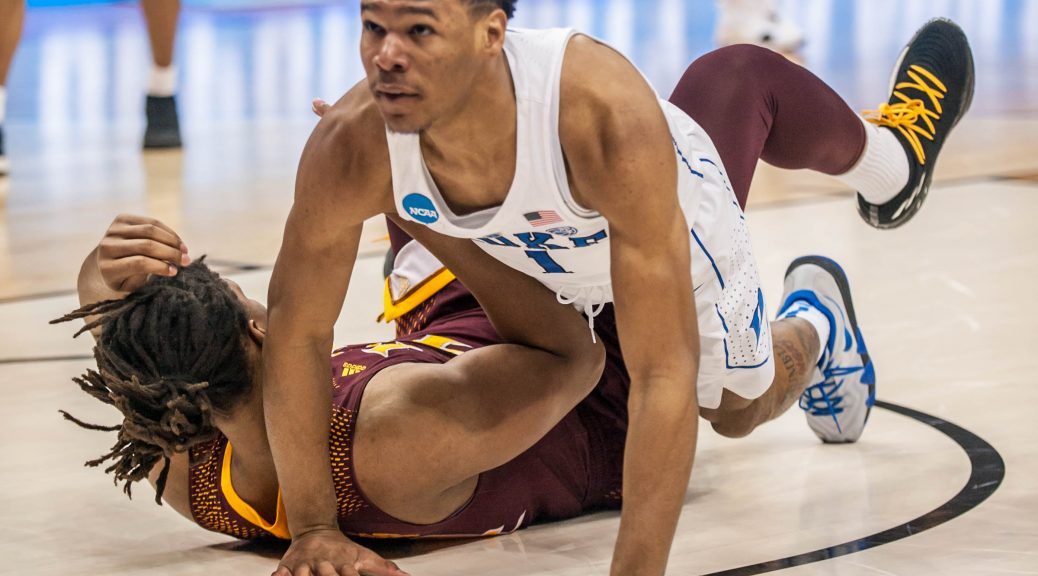 COACH KRZYZEWSKI: Well, we -- I'm happy with my team, you know? You bring a young team in here, and I thought our guys really handled their first NCAA game very well against a team that has a championship pedigree. You know, Tim's program is one of the best in the northeast and the Iona name in basketball is huge.

And they have a lot of older guys. Obviously, they can put five guards out there, which was tough for our zone to cover for a while in the first half. In the second half we did a much better job of it.

But defensively, we did make them take tough threes and they didn't shoot their normal 40 percent or so from three-point range.

But I thought my guys played well, and proud of them, and we're going to now play against another championship caliber team in Rhode Island.

Q. Grayson, what did you think about how -- your young teammates handled the situation the first time?
GRAYSON ALLEN: I thought they did a great job, mostly because I thought they came out aggressive and confident. I don't think we were nervous or overanxious because of the tournament atmosphere, I thought. We came out very well. We scored the ball to start the game and played hard and had to make an adjustment on defense because of Iona's defense.

This was a game, if we didn't come out like that and didn't come out hard, we could have been down seven, eight points from the get-go because of how they scored the ball. Really proud overall how they came out and just attacked right from the start.

Q. Grayson, when you went through your first experience in the NCAA Tournament, what can you really remember from that and just the feeling of doing it as a freshman when you have all of these teammates?
GRAYSON ALLEN: My first role was a little bit different than what I'm telling to these guys, because I was not playing as much. And so my first one, really, I look at my sophomore year in a lot of ways, because that was the first one that I was, you know, fully into playing 30-some minutes a game, you know, you're part of someone else's game plan, whereas my freshman year I wasn't, so, just really trying --

COACH KRZYZEWSKI: Really trying to think that you weren't.

GRAYSON ALLEN: So just really trying to tell these guys -- like prepare them for the atmosphere being inside of it, versus being on the outside of it. Where last year, they were watching the games in high school, during the day, and now you're in it. So it can be easy to get distracted by who is playing who, who is beating who, what's the score going on here.

But if you just focus on today, Duke versus Iona, if we were able to focus on that, we come out and play well. We first focus on Duke, not Rhode Island, not focus on anything else. Not get distracted about anything else, we'll be all right.

Q. Grayson and Trevon, I know you probably haven't seen much film on Rhode Island, we have a lot of senior guards, a lot of experienced guards. What's your first take on all of their guards and back Court?
GRAYSON ALLEN: They're very experienced and their guards are very tough. We played against them last year, and I remember that game, their guards were very tough. They go at you both offensively and defensively, and they're a very experienced team. They have a pretty good amount of guys back from that team that I played, so it will be a very tough match-up because of how experienced they are and because they are a team that wins.

Q. In the first half, is it a matter of getting behind the zone when they're getting those baskets?
COACH KRZYZEWSKI: First of all, they average 80 points a game, so you're not talking about a team that doesn't score. They have eight guys that have scored 20 or more points in a game, and some guys have scored 30. One guy scored 40.

So, when they put five guys out there -- and it's not a conventional way of doing it, they actually put five guys out on the perimeter, and you have to talk and move a lot. Overall, I thought we did a good job against it, we had -- brought a 15-point lead and we took a couple bad shots. And that hurt us more than our defense.

And -- but my staff, Jeff, made a really good suggestion at halftime, and we went with it in how to change the zone just a little bit, and that worked for us. But they can shoot the ball. And that's the scariest thing for us going into the game. Because if we're tight a little bit, they start shooting like they did, you know -- it's one game, you get a shooter's chance. That's what Chris Collins used to always say to me.

Q. You know I can't let you get out of here without a Hurley question?
COACH KRZYZEWSKI: Which one?

Q. Obviously you're close with the family. What do you think it means for Danny to have his father be watching him and father be watching his son --
COACH KRZYZEWSKI: Yeah. We played at Seton Hall the game before we were in the Kentucky game and brother against brother. No, I love -- look, I love their family. When Bob was inducted into the Naismith Hall of Fame, he asked me to present him and I did. It was an honor to do that.

Their family epitomizes the highest level of love for the game. And the father, you're talking -- one of the great coaches. It doesn't matter what level. That's why he's in the Hall of Fame. And his two sons have learned a lot, learned a lot. And Danny's team -- yeah, he's built a -- he hasn't built a team, he's built a program there. You know, that's the difference. That's what you want to do is build a program that develops teams year after year, and he's done that at Rhode Island.

Q. Just to follow up on your thoughts about your guys making their debut in the NCAA --
COACH KRZYZEWSKI: Yeah.

And whereas Iona, their program's been in the last three years, so this is just nerves. We didn't have it today, but because you're a human being, you can have it. You can get jittery, you can get a little bit tight. That's what happens to people. And our guys didn't do that today which I'm really pleased about.

Q. What was the first experience you had personally in any NCAA game in any way, shape, or form?
COACH KRZYZEWSKI: It was '84 --

Q. No.
COACH KRZYZEWSKI: '84, we got messed over, in Washington. They undercut Johnny Dawkins on a last-second lob and didn't call it and Detlef Schrempf and those guys beat us. It's pretty for me to remember that.

But also, it's an honor to coach any NCAA game. You know, they don't -- we've been fortunate we've been in a lot of them, but I don't take any of them for granted. They are beautiful in any way and getting a win in an NCAA game is fantastic.

Q. Mike, how valuable is it if Trevon can consistently hit from the perimeter like he did today?
COACH KRZYZEWSKI: No, it's crazy good. He's worked on it, and I was proud of him after he hit the first one that he was aggressive and taking the others, you know, like -- wasn't like, oh, I'm happy. And -- but overall, the biggest thing, until the second half, when we had a bigger lead, he and Grayson had 17 assists and five turnovers. And then they messed around with a couple balls.

It probably should have been like 17-3, but if they can give us the floor game like that, and then, you know, he -- it would be nice if he hits that many. Just so he's a threat, and he is. So, that was a big boost for us.

Q. Now I'm blanking. What makes you most worried about Rhode Island match-up wise, with such experienced guards?
COACH KRZYZEWSKI: You're going to answer my question. My answer. Now, I don't know if I asked the question or you did. Anyway, let me start over.

Rhode Island, we played them last year early, up at Mohegan Sun, and they were a tough-minded group. And that's what Danny has built there. And they have -- they can put four guards out there, too. They can handle and shoot and they value the ball and play defense. So, we'll have to beat a really good team to advance, but that's -- look. We're not unlike the other teams in the tournament. Everybody in the tournament is good, but they are experienced good. Okay? Thank you.