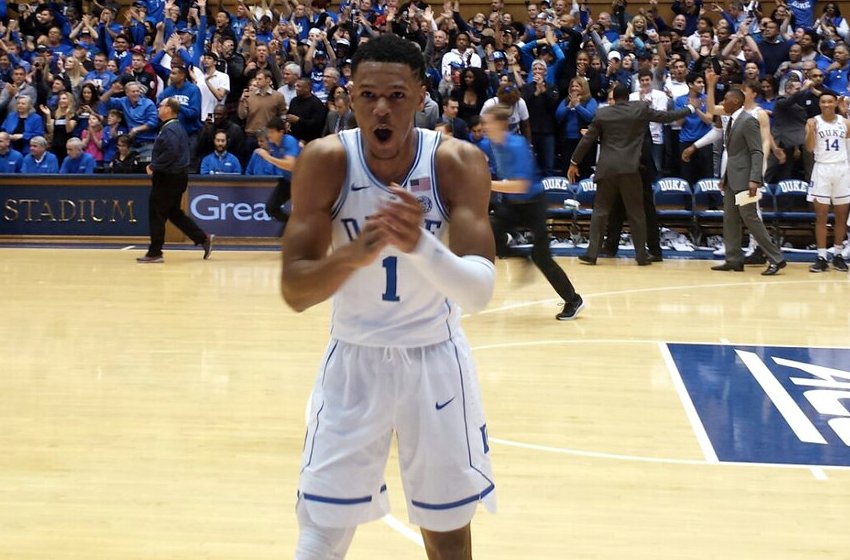 Duval was saddled with four fouls that limited him to 22 minutes of game play.

Duval would come back into the game late and huge three-point shot and score on back to back drives while assisting Wendell Carter Jr. to give Duke an 82-81 lead with 6:27 to go in the game.
He would play the rest of the way with four fouls.

At the 5:47 mark his only made three of the game would pull Duke back within a single point in what was a back and forth affair where both teams were unstoppable.

"I was really upset I was in foul trouble throughout the game because I knew I could help out thee team.  But I just hung in there and knew it was time to go and do whatever was needed to help the team win," said Duval who would end the game with 16 points.

The Duke team was playing off the emotion of the Cameron Crazies at times and Duval came over to them the next possession down after his made three.

Duval then commented on Marvin Bagley III and his record-setting night. "It's just amazing.  You don't get to play with players like him everyday.  So to play with someone so talented it is just fun to watch him and play on the same team."

When the dust cleared Duke came away with a 100-93 win in what Mike Kryzewski termed as a great ACC battle to watch.  It was clear that both Duval and his coach enjoyed the competitive game.

Duval came into the game leading the ACC is assists but had just 4 in the contest which will likely drop him into 2nd place.

More to come on the great win.  Join BDN Premium during out special where we double your membership.