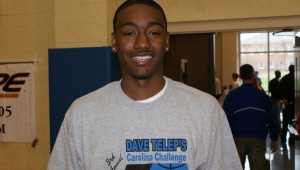 There has been quite a bit of buzz on various message boards about John Wall contacting North Carolina Coach Roy Williams, or was it the other way around?  The news traveled through the Duke, UNC and Kentucky forums at warp speed, each poster giving it more of a spin until the rumor mill was spinning like a tornado.

Wow!  First, it was John Calapari's leaving Memphis for Kentucky, many of their fans claiming Wall was a package deal.  Today, it was UNC's turn, despite the fact they are on the verge of a semi-final game in the Final Four.  I made a few calls and got a different take from each person, almost as if they were making it up as they go.

I finally opened the Blue Devil Nation Premium Message Board and the sky was falling.  I then saw that the News and Observer had talked to Wall's AAU Coach, Brian Clifton, about the situation, but he hadn't talked to Wall.  What was left to do in order to figure this whirlwind out?  Of course, talk to John himself, and that's what I did.  So, here is the latest from the horse's mouth.  And as always,  BDN Premium just deals in the facts.  That said, here they are -[private]

Wall had just finished a day at school where he is trying to close out the academic year in a strong way.  Other than that, he is preparing for the Nike and the Jordan Brand Classic All Star Games.

It sounds like a lot has been going on today.  The message boards at Duke, Kentucky and UNC are buzzing.  I have heard that either you contacted UNC Coach Roy Williams or that he contacted you.

No, he contacted me.

When did that call take place?

Can you talk of what he had to say?  Was he getting involved in your recruitment or showing interest?

He really didn't say too much.  He just said he wanted to call and keep in contact, but it's nothing major right now.  We were just talking, he hasn't said he was interested yet.  He is just getting ready for the Final Four and all that.

So, is there any truth that you contacted anyone at UNC to have him call you?

Okay, just trying to get the facts straight.  Will you likely talk to Roy Williams after the Final Four?.

Uh, that's what I am hop ... (cut short) that's what I think we are looking to do.  But like I said, I don't really put too much into what's going on.  He just called and that's basically it.

Has UNC been a school you had been interested in?  Did you grow up a UNC fan?

I liked them like any other school that's around like Duke and N.C. State.  I liked all those schools.

Do you feel as if UNC is getting in late at this point, or is this good timing?

I don't really know (obviously thinking about the question).  I don't know if they are really in it or not, they just call and that's it.

Duke has made inroads and Kentucky is on the verge of making a push, is it odd to you in any way that Williams calls after these developments?

I don't know.  I think he (Roy) just called to see how I was doing.  If he calls back and we talk, I can let you know more about it, but all we had was a quick conversation.  He asked how I was doing and that was basically it.

Have you had a chance to talk with John Calipari yet?

Naw, he called me the other night but I was asleep, so I will call him back today.

But you have been staying in touch with his assistant coaches that will likely follow him to Lexington?

When is the last time you talked to Duke?

It was the day of the McDonald Game.  I talked with Coach K.

How did that go?

We were just getting to know each other better?

What are your overall feelings about Duke at this point?

I think it's a great school, you know.

And N.C. State?  Have you talked with them?

Um, they're still in there.

Have you been able to talk with Brian Clifton or anybody else since all these happenings?

No, not really.  I'm just get ready for the Nike Hoops and Jordan game.

Are you still targeting the Jordan Brand game for a decision?

No.  That's not going to be when I announce my decision anymore.

What's on your agenda next in regards to recruiting?

Probably taking a trip to Miami.  I will make my decision shortly after that.

How many official visits have you actually been on?

You have one more visit besides Miami that you can still take.  Is it fair to say that might be used for Kentucky?

I don't know yet, it could be reserved for anybody.  I really don't know, you know.

But UNC would be like Duke in that you wouldn't necessarily have to take an official visit?

Was it exciting that Roy called you and would you be willing to let them in?

I really don't know yet, we just have to talk about it.  It's really like any other coach calling you.  Carolina is a great school and he's a good coach, but I didn't really get all that excited, they are just like any other school.

They didn't really recruit me really hard , so ..,

Which school has been recruiting you the longest?

Where to from here?

Just trying to finish school strong before the break and that's about it.

Thanks, for helping me get the facts straight and good luck in the coming all star games.