DURHAM - The Duke Blue Devils improved to 26-2 overall this season with a 78-61 defeat of #23 Temple on Wednesday evening in Cameron Indoor Stadium.  Duke was led by Kyle Singler who dropped 28 points on his second to last game he'll play in Durham.

After struggling a bit on offense in the first half, the Blue Devils made some halftime adjustments and they played better on the post where they were once again led by Mason Plumlee who grabbed 13 rebounds and 6 points, 4 of those coming off successive dunks in a second half spurt.

An 8-0  run late in the first half helped Duke to a 31-24 edge in a game eerily similar to their last outing.  The Blue Devils scored 34 points in the paint and held an 18-6 edge in points off turnovers as their defense continued it's solid play of late.

Nolan Smith added 15 points and 4 assists but was just 5 of 17 from the field.    In short, it was another workmanlike effort by the Blue Devils who next play Virginia Tech with ESPN Game Day in Blacksburg for what is sure to be a hostile environment.

Sidebar -Duke has won 86 straight games versus non conference opponents.  Duke has won 35 consecutive home games, longest in the nation.  Duke has won 20 straight games in the state of North Carolina.  Mason now has 13 games with double figure rebound this year.  Smith scored in double figures in all but one game this season, the one where he played PG for the first time after Kyrie Irving's injury.  For the second consecutive game, no media member asked about Kyrie Irving in the post game.  Andre Dawkins hit 2 of 2 three point shots and that gives him an impressive .432 on the season.

JACKSONVILLE, Fla. - Duke had little trouble disposing of Arkansas Pine Bluff  by a score of  73-54   in their opening game of the NCAA Tournament.  This one was pretty much over from the opening tip in that the Blue Devils are far too deep for the game but undermanned Golden Lions.

Duke pushed their season record to 30-5 overall and they will next take on the winner of the California-Louisville game on Sunday with the time yet to be determined.  The Golden Lions fell to 18-16 and were led in scoring by Tavaris Washington with 9 points.

Singler continued his torrid play of late with his 15th 20 points or more this season.  Singler also recorded his seventh double-double of the season by grabbing 10 rebounds in the game.  In fact, Singler has 728 career rebounds at Duke which is more than Carlos Boozer had in his first three seasons.

"One of the keys for s coming into the game was just attack, to attack their defense," said Singler.

The win helped Duke improve to 23-2 in  NCAA opening round games under Krzyzewski.

The taller Devils dominated the boards holding a 41-24 edge in rebounding.   "One of the advantages we have is our size, especially inside," said senior Jon Scheyer.

Then there were the second chance points where Duke held a 16-2 advantage.

Krzyzewski has now had 9 teams reach 30 wins in his 30 seasons as Duke's head coach. "It's nice to have.  I mean, but no I don't -- I know we've done it a number of times, I don't know how many," said Krzyzewski when asked of his teams 30th victory.

Stay tuned for interviews with the Duke players 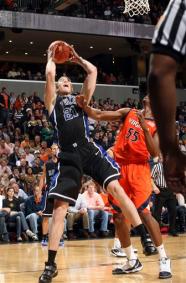 Duke came away with a 67-49 win over the Virginia Cavaliers on Sunday night and in the process set up the biggest match up in the ACC this season.  With the win the Blue Devils go to 25-4 overall and 12-2 in the ACC and now turn their attention to second place Maryland in a game that could decide the regular season champion.

On a night when Sylvan Landesburg sat with a deep thigh bruise, the Cavaliers were no match for the seasoned Blue Devils.  Once again, defense led the way for the Blue Devils.  Duke held Virginia to just 31% from the field for the game and the Cav's 49  points marked the 4th time this season Duke has held an opponent under 50 points.

Kyle Singler scored 12 points during a 20-4 Duke run to start the game and the Blue Devils never looked back.  Singler ended the game as Duke's high scorer with 21 points.  Senior Jon Scheyer picked up where Singler left off in the first half ending the game with 20 points and 5 steals.

Mason Plumlee added six points, while Andre Dawkins and Nolan Smith had 5 points apiece.  Lance Thomas tallied 4 points, Miles Plumlee 3, Steve Johnson 2 and Jordan Davidson 1 to round out the scoring for Duke.  The game marked only the second time this season Smith was held to under 10 points.

Duke Coach Mike Kryzewski moved past Dean Smith of North Carolina for the most ACC road victories this season.  And the Blue Devils pushed their season road mark to 5-2 after many questioned whether they could play away from home just a month ago.  The victory also meant that Krzyzewski know has three consecutive 25 plus win seasons.

Duke will next face their toughest road test of the season when they visit Maryland in College Park.

Notes - During the post game, Kryzewski said he was pleased with his teams performance and that they just want to return to Durham safely and get some rest for the big week ahead.  Duke has now won eight straight games.  Duke's largest lead in the game was 27 points.