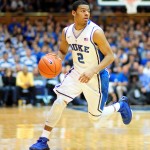 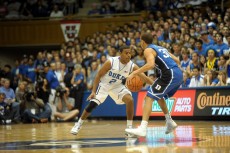 It's been a busy off-season for Duke point guard Quinn Cook.  Be it the sweltering nights at the North Carolina Pro-Am or some real road games in Eastern Europe, Cook has been playing a lot of basketball.  To Blue Devils fans' delight, he is clearly improving his game, and that is what many had hoped for this summer.  Only time will tell if those improvements translate into a starting position in the fall, but there certainly is reason to think he has a good shot at earning that spot.  We'll talk more about Cook a bit down the road, but until then here is a video interview we did with him just before the championship game of the N.C. Pro-Am: 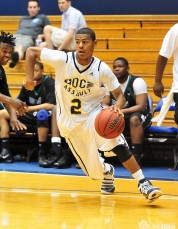 Blue Devil Nation video catches up to Quinn Cook, the true freshman point guard for Duke University. Coach Krzyzewski said that he was healthy and ready to go during today's press conference. 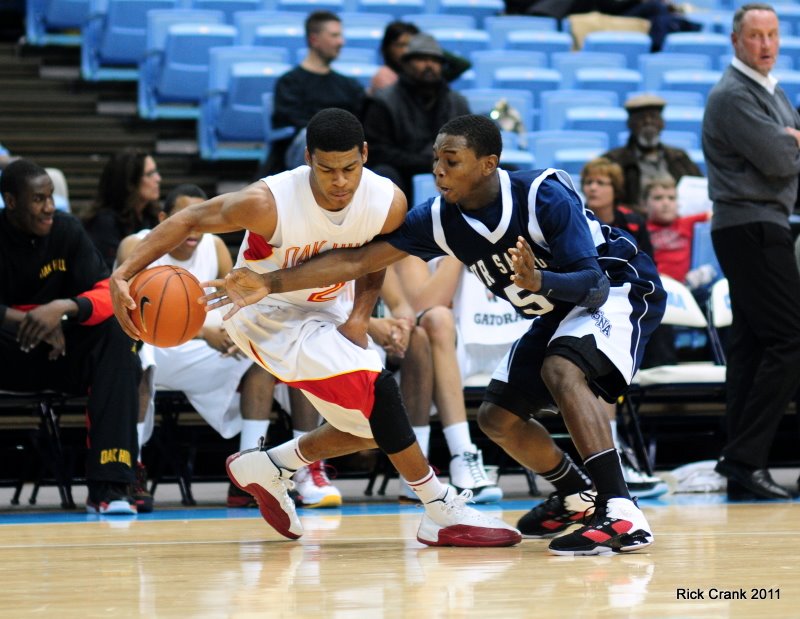 Future Duke point guard Quinn Cook led his team to two victories over the weekend, one of those games being played in Cameron Indoor Stadium. BDN was on the scene to bring you this Cook interview - [private]

Next up - Michael Gbinije Interview [/private]

It's been a tumultuous six months for Quinn Cook. The jovial 6'1" D.C. area native won a Gold medal for the USA 17 U team in Hamburg, Germany, suffered a partially torn meniscus after falling awkwardly at the end of an exhibition game for television, began attending a new school in rural Virginia, committed to defending National Champion Duke, and became the leader of the mythical number one high school team in the country, Oak Hill. After this weekend's nationally televised loss to Milton HS of Georgia, a more somber Cook spoke briefly with Blue Devil Nation about his physical recovery, his transition to Oak Hill, his McDonald's All-American aspirations, and which players he's trying to recruit to Duke.

First of all, how's your knee right now?

It's a little sore, I mean, cold weather really makes it sore. I just wanted to try my best.

Are you close to a hundred percent?

I [private] don't know. I'm just trying to ice it, man. Just ice it and put as little stress on it as possible. I had surgery on it only three months ago. I was on crutches. A couple of months is just not going to completely heal it.

How's your recovery and rehab going?

It's been going good. Since we're in season, I can't do as much, but I still have to do balance and work on exercising it.

I've been there and I know it's remote, but do they have all the facilities you need there?

No, there's no facilities. It's just me using what we have there.

Just doing what you can. What are some things, like your upper body, you could work on while you were recovering from surgery?

I just have been lifting a whole lot more. Coach thought that was something that would help my game. So, since I've gotten to Oak Hill, I've added six or seven pounds. I've been trying to build and add to my upper-body, since my lower-body isn't there yet.

What's the transition from DeMatha to Oak Hill been like?

It's been great. It's just an honor to put on the Oak Hill jersey and to play for a great coach like Coach Smith. He's coached my idols like Rajon Rondo and Brandon Jennings. Guys I've watched film after and just tried to pattern my game after. They learned a lot from him so I try to be just like a sponge around him. He has so many great stories and great ways to make me better.

Was it hard for you to leave home? was that an issue at all?

Yeah, it was hard leaving my mom. She's a single mother, but she knows that I have to do what's best for me. It's tough being away at times. It's probably the hardest part about coming to Oak Hill, you know, being away from you mom and not being able to hug her at night.

Your mother was here tonight, though, right?

Yeah, she made this trip, but she doesn't come normally. It's actually like being in college because, when you're far away, you've got to get up on your own, be at class on time, and make your bed. You become a man.

Doron (Lamb) said that when he came to Oak Hill, he had to get used to almost always being the road team, always being booed, and being comfortable with target on his back.

Yeah, well, we had a target on our back at DeMatha, but it's just bigger here at Oak Hill. That's fun, though. You've just got to bring your 'A' game every night, though, as you can see. I mean we didn't play well tonight, but it's a long season. We just can't hang our head after one loss.

Yeah, you've just refocus your team and don't let one game carry over to the next. Talk about the matchup with Scott.

Shannon's a great player. I've had a lot of match-ups with him. I don't know what happened, but he's a heck of a player and he led his guys to the victory.

This is your fourth trip to the Hall of Fame.

Yeah, this is my fourth time and it's my favorite event because there's just so much history. I get goosebumps every time I walk into the Hall of Fame.

You can't help it if you love basketball.

One of the goals you mentioned over the summer was to make the McDonald's All-American game.

Yeah, that's definitely one of the goals I set out for myself this year and hopefully that can still happen. I just pray that I didn't blow it tonight. Hopefully, I didn't though.

How do you feel your shot at making the game is now? You've had a very good career and a solid senior season so far.

I don't know. I didn't play well tonight. Hopefully, they look past tonight.

Can you talk about competition you face both in practice and in games?

Yeah, it pushes you because you're playing against the best players in the country every day, one way or the other. We play against the best and then we're all top-ranked players. It's very competitive and we're just trying to make each other better.

What, if anything, has the Duke staff asked you to work on?

Everything, but Coach K always says that he wants me to keep being the person off the court that I am.

Yeah, a leader and to hit the books. The rest of it will take care of itself.

How do you account for your popularity among players in your class?

Well, I mean normally I'm a very outgoing guy. I'm just a little down right now, but, you know, normally I like to laugh and I'm always smiling.

Yeah, I know I'm so sorry to be bothering you after this game

No, that's cool. You know you get one life and so you never take anything for granted. I've had a lot of tragedy in my life.

I'm just trying to have fun and do the best I can.

Are you putting that winning personality to use and recruiting any players to Duke?

All right, which guys?

Alex was watching you play tonight.

Yeah, he's my boy. Them three basically, but I'm happy to recruit anyone else who wants to come. Hopefully, they like what they see normally and want to join me.

I'm sure they can see that you've got very good court vision and get your teammates involved. Thanks a lot for your time tonight. Just finish the season strong.