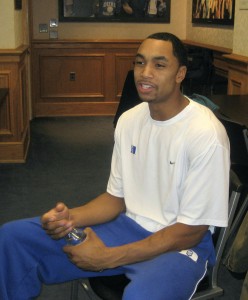 l Duke is 5-0 on the year, marking the 34th time in school history and the fourth straight year it has opened the season with five straight wins.

l The Blue Devils are ranked 10th in the AP poll and fifth in the ESPN/USA Today Coaches poll.

l The Blue Devils have been ranked in 22 consecutive AP polls.

l Junior Gerald Henderson was named to the 2K Sports All-Tournament team after averaging 12.5 points, 4.0 rebounds and 1.5 blocks per game in four contests. He scored a season-high 20 points (all in the second half) in Duke’s semifinal win over Southern Illinois.

l Nolan Smith scored a season-high 16 points on 6-of-8 shooting from the field and 4-of-5 from the free throw line against Michigan. He made all six field goal attempts inside the three-point arc and added five rebounds and four assists in the championship game.

l Sunday’s contest marks the 800th game Duke will play as a ranked team under Mike Krzyzewski. The Blue Devils are 655-144 when ranked under Coach K.

l Duke has outrebounded four of its first five opponents. The Blue Devils have outrebounded the opposition by 12.2 rebounds per game, including a +3.2 edge on the offensive glass.

l Duke is averaging 25.8 made free throws per game this season. The Blue Devils have made 38 more free throws than their opponents have attempted.

l The Blue Devils scored 54 points in the second half against Southern Illinois for their largest scoring output in a half this season. Duke was 12-of-23 (.522) from the field, including 5-of-9 (.556) from three-point range, over the final 20 minutes of play.

l Kyle Singler has led Duke in assists in each of the last three games. During that stretch he has 12 of his team-high 16 assists.

l Duke has outrebounded the opposition in four of five games this season. The Blue Devils have grabbed 40 or more rebounds in a game four times.

l The Blue Devils have limited four of its first five opponents under 60 points. Duke is allowing just 59.2 points per game this season.