BDN asked many of the questions when Nolan Smith addressed the media yesterday.  He opened up about the coming season, his off season work and picking a Jay Z song to hit the court with during tonight's Countdown to Craziness.  You can bet that BDN will be on the scene working hard to bring you unmatched coverage of all things Duke.  In fact, some of the camera crews joked with me encouraging me to ask questions, but seeing how another site benefited from our questions without doing any of the work [nothing new], we'll make sure that we work other angles to bring you different content than the norm and let them do their own thing.  Don't get me wrong, we understand that all is fair game at media events, but it's the principle which disturbs not only myself but other sites.  Please keep in mind that the Blue Devil Nation has extended interviews.  While some interviews [like this one] are similar to those found on video, a lot of ours we're extended or one on one's in an effort to get something different.   I apologize for the mini rant, but I respect the Duke web sites that get out there and do the work and not ride the coattails of others.  Fortunately for print media, this is not as big of a problem for being there is a part of the job.

Riding coattails is a metaphor that refers to the way in which lower level or uninspiring celebrities can often reach stardom through their ties to another, more popular and successful celebrity or entity. This can often be used as a generic phrase for anyone that hangs onto another person or entity as they forge ahead, without effort from the hanger-on. 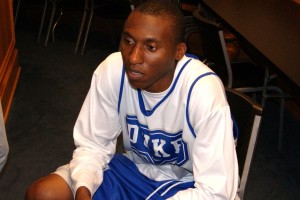