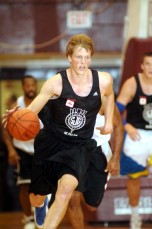 Didn't we just do this? Another consequence of the unbalanced conference schedule is Duke and Maryland playing each other twice with just 17 days separating the two contests. With the Blue Devils in 1st Place at 12-2 and Maryland in 2nd Place with an 11-3 record, this year's schedule sets up nicely for hoops fanatics jonesing for marquee match-ups. A Duke victory locks-up the ACC Regular season crown for the Blue Devils.

1. Outside shooting: Duke is shooting .394 on the season from behind the 3-point arc. However, in the 13 games played in Cameron Indoor Stadium, Duke is averaging .442. Maryland is eighth in the league in 3-point field goal percent defense. Duke needs to knockdown the long ball in this game.

2. Rebounding: Duke leads the ACC in rebounding margin at +6.6. Maryland is 11th at +1.2. Duke is second in the ACC in offensive rebounds averaging 14.6 per game. Duke is bigger and stronger and will need to be aggressive on the glass.

3. Assists and turnovers: Both Duke and Maryland take care of the basketball with a 1.3 assists to turnover ratio. Maryland is second in the ACC with 8.4 steals per game. Neither team can afford to give the other extra possessions in a game this analyst expects to be decided in the last couple of minutes.

In the 77-56 win at Cameron Indoor Stadium, Duke more than doubled up Maryland from behind the 3-point arc outscoring the Terrapins 15-6. Duke shot 33.3 percent (5-15) against Maryland’s 15.4 percent (2-13). Jon Scheyer led the way with a 3-4 performance from downtown for the Blue Devils.

On the glass, Duke outrebounded Maryland 39-34. Brian Zoubek put in a career performance against the Terrapins with 17 rebounds and 16 points. Eight of Zoubek’s rebounds were offensive. Duke scored 20 second chance points to Maryland’s 12.

The assists statistic was basically even as Duke recorded 12 with Maryland having 10. However, turnovers were a factor as Maryland turned it over 14 times to Duke’s seven.

Basketball is actually a pretty simple game. Shoot the ball, rebound the ball, and take care of the ball. Duke executed these fundamentals better on February 13 and came away with a 21 point victory. The key to winning on March 3 will once again be superior execution of fundamentals.

Off the bench, Maryland has four players averaging double digit minutes: Cliff Tucker (15.3), Dino Gregory (20.3), Adrian Bowie (15.4), and James Padgett (10). Maryland has more depth inside this season but they are a smaller team than Duke.

This will be senior night for Vasquez, Milbourne, and Hayes, and emotions will be high. Those guys desire to go out winners in their last home game. Throw in the ACC Regular season title and number one seed in the ACC Tournament that Duke can secure with a victory and the stakes are in the stratosphere.

In the first preview, Blue Devil nation discussed both teams keeping emotions in check and preventing the other from jumping out to an adrenalin fueled early lead. The same caution applies to this game. In the end, this game will be a tighter and tougher contest than the game in Cameron Indoor Stadium. The stakes are higher and the team with superior execution will prevail.