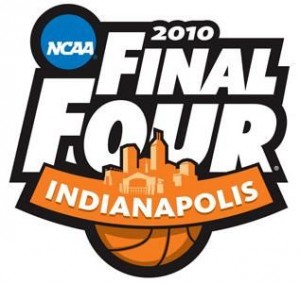 INDIANAPOLIS -  Well, we final got settled in to Indianapolis after switching motels at the last minute.  One stop at the photo booth and then the media pass later and we are now in Lucas Oil Arena, the home of the Indianapolis Colts.

Coming in the area surrounding the stadium is packed and parking lots are full everywhere.  Once inside the arena, the Butler Bulldogs are practicing to a packed house.  The Blue Devils take to the floor at 3:10 and the interviews with the team start at 2:30 just before they take to the hardwood.

Of course, BDN will be on the scene all weekend long and it's sure to be a grand time around here, especially if Duke advances.  We'll have some pics, interviews, reports and of course we will tweet live during the game provided the option is available.

The Butler Bulldog, a live canine mascot just made its way through the media room and the usual suspects of members who cover Duke are in the house as is my pal Bob Harris. As for the facility itself, it's wonderful and made for a Final Four.

The locals are friendly and team colors abound pretty much everywhere within 30 miles of the arena.  The NABC All Star game will take place later this afternoon but with no ACC players in the game, we'll use the time to work.

Coming through West Virginia, we stopped at a local eatery and needless to say we kept it to ourselves that we were Duke beat writers.  That is, until one of our entourage felt the need to blurt it out [TMI] just before we ordered and you could see the change in attitudes if you know what I mean.

Interestingly, the morning edition of the Indianapolis Star has a huge headline saying, "Boo Devils," which is yet another article on Duke hatred.  However, if one looks beneath the surface or does their research you will find that Duke is quite popular.

We also found out that India Pacer Josh McRoberts is putting up a lot of Dukies at his house this weekend.  McRoberts said he stayed in touch with Jordan Davidson and that NBA scheduling conflicts prevented him from getting back to Cameron but the day is coming when he will return.

And fellow Pacer Mike Dunleavy said, "It's cool that the tournament is here in Indy and that Duke is a part of it."  Dahntay Jones is also a Pacer and all three will make an effort to make an appearance.

There has already been a Jerry West spotting. The Los Angeles Lakers great was, of course, a star while he was at West Virginia as well.  As for other celebs, well, they all turn out for the Final Four.

Finally, if anyone out there thinks Duke doesn't remember their loss to the Mountaineers, think again.  You will not see it in their comments, but the memories loom large in many ways which we may share if Duke advances but not until then.

Tom Izzo is on the podium in the background now as West Virginia is having their open practice for fans.  Duke Assistant Coach Steve Wojciechowski [Wojo] is taking in the practice for some last minute scouting.  The entire lower level has been opened to fans for free and it is packed.

During practices, the schools bands and cheerleaders look on as two huge screens in the corners of Lucas Oil Stadium carry the action.

Duke is about fifteen minutes from holding their open media, so we'll wrap it up for now, but be sure to check in often with BDN all weekend long.