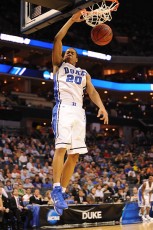 • Duke is ranked No. 4 in the AP Poll and the ESPN/USA Today Coaches Poll. Florida State is unranked in both polls. The Blue Devils are 51-9 all-time when ranked fourth in the AP Poll.

• Duke is one of two teams (Baylor is the other) in the NCAA to rank in the top 5 of the RPI, Strength of Schedule, AP and Coaches Polls.

• The Blue Devils have won 45 consecutive home games, one shy of matching the school record.

• Duke and Florida State have met 37 times heading into Saturday’s game with the first meeting between the two schools coming on Jan. 3, 1955.

• The Blue Devils lead the all-time series 30-7, including a 17-1 mark at Cameron Indoor Stadium.

• Duke has won five consecutive games and 10 of the last 13 in the series.

• Mike Krzyzewski is 28-6 at Duke against the Seminoles, including a 15-1 mark at Cameron Indoor Stadium. Coach K missed both games against Florida State during the 1994-95 season.

• The Blue Devils have won 64 consecutive home games against unranked opponents, dating back to a 68-67 home loss to Florida State on Feb. 4, 2007.

l The Blue Devils have won 45 consecutive games in Cameron Indoor Stadium with 38 of the victories coming by 10 or more points.

l Andre Dawkins is averaging 22.5 ppg. and shooting 57.1 percent (12-of-21) from three-point range over the last two games. Dawkins scored 18 straight points on six three-point field goals during the first half of Duke’s win over Wake Forest.

l Mason Plumlee ranks third in the ACC in rebounding at 9.4 rpg. He has led the Blue Devils in rebounding 13 times overall this season, including 12 of the last 15 games.

l The Blue Devils also have a +9.1 rebound margin in their nine home contests. The post trio of Mason Plumlee, Ryan Kelly and Miles Plumlee is averaging 23.6 rebounds per game at Cameron Indoor Stadium.