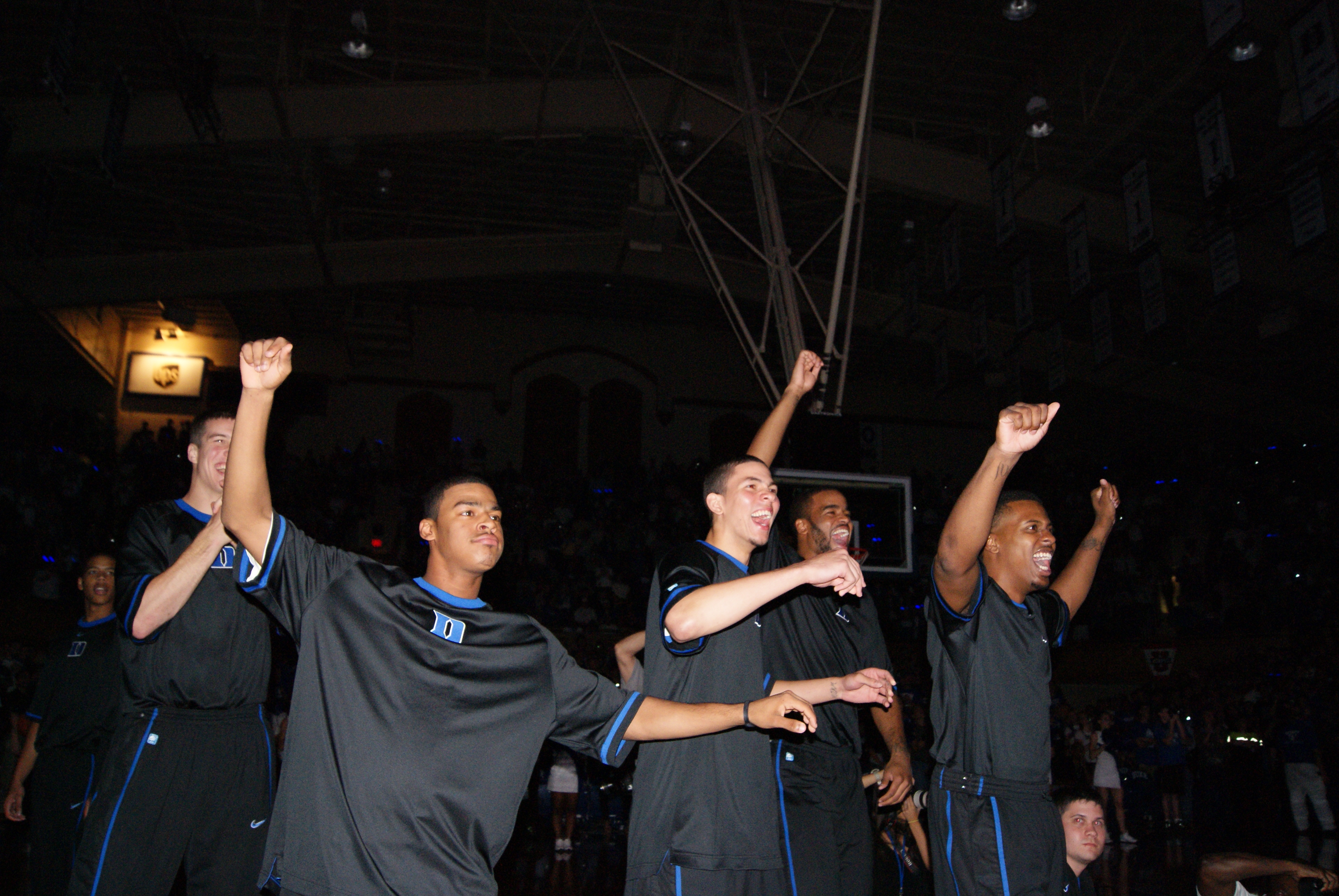 It was a sunny afternoon this past Wednesday on the Duke campus and at first glance it seemed business as usual, but parked in front of Cameron was a bus which would take the Duke Mens Basketball team to Blacksburg.  There would be no flight or luxuries past and even the traditional ice cream spread the evening before the game was gone, for this team was putting away all distractions, including the use of social media.

The Duke Blue Devils took a long bus ride to Blacksburg, Virginia after a tough couple of practices and a new found focus helped them to a 75-60 victory over Virginia Tech.  After allowing St. John's to make a comeback where a sizable lead was blown, the Blue Devils went into "Circle the Wagon," mode and whatever Krzyzewski did behind the scenes, prompted Duke to an easy team victory.

Once Duke adjusted to the way the game was being called, they took the crowd out of the game in the first half, working their way to a comfortable 10 point lead.   And from that point they never looked back on their way to an ACC win which would keep Duke in a three way tie for first place.

There were several signs in the air which went unnoticed by some in the media and fan base, that Duke was in a bit of a lock down mode.  Krzyzewski made no bones about that fact that he was not too pleased with the Blue Devils performances of late and that he more or less thought they'd become, pampered, fat and happy.  There was no media day this week where one could get player quotes and it would not surprise me if he didn't go as far as to lock his team out of their cozy facilities as he has done on rare occasion in seasons past.

Austin Rivers played perhaps his best overall game at Duke scoring 18 points to go with 5 rebounds, 5 assists and a steal.  Rivers went an efficient 7 0f 11 from the floor, 4 of 6 being beyond the three point stripe to lead the Blue Devils in scoring.

It was an ACC Rookie of the Week performance by Rivers whose production level proved extremely efficient.  But this was a team win in every way where numerous players contributed where Duke got 34 points from it's bench.  Of course, the Blue Devils had shaken their lineup up, but it was still the workman like togetherness that helped Duke to the easy win.

One of the players who came off the bench was Ryan Kelly who was replaced by Josh Hairston in a lineup change.  Kelly responded with 15 points and 4 rebounds while Hairston finished with 6 points and 3 rebounds in 15 minutes of play.

Seth Curry was another junior that came off the bench and he tallied 11 points including 6 of 6 from the free throw stripe.  In fact, the team knocked down 13 of 16 attempts and that was a key factor in the win making one think this was an area of emphasis of late.

Duke also outscored the Hokies by a 38-26 margin in the paint and Mason Plumlee had a lot to do with that adding 10 points, 6 rebounds and the only two blocks of the game for Duke.  His brother Miles, added 4 points and 5 boards in just 9 minutes of play.

And every other player for Duke added something as well.  For Andre Dawkins it was his big trey in the first half and his questionable technical foul seemed to fire up the Blue Devils even more.  Dawkins and Duke were so pumped up that Krzyzewski had to calm them during one timeout.

Quinn Cook dished three dimes and added a couple of key buckets keeping the lead at a comfortable margin while the Hokies tried to stage several comeback efforts in nine minutes of burn.  And Tyler Thornton added his steadying influence which doesn't always translate to the box score.  Again, this was a team victory for the Blue Devils who sit a single win away from yet another 20 win season with the Mimi Hurricanes coming to town on Super Bowl Sunday.

The Blue Devils were never rattled in Blacksburg despite a very hostile and vocal home crowd and after taking a double digit lead as the 1st half ended, they never looked back.  I doubt Duke will be taking a bus on too many more trips other than next Wednesday's game in Chapel Hill with arch rival North Carolina, but maybe they've learned what it takes to compete at the level it will take the rest of the way this season and have gotten back to the kind of hard nosed Duke Basketball Coach Krzyzewski and the fans love to see.

Team Notes:
• Duke improved to 38-8 in the all-time series against Virginia Tech and has won 16 of the last 19 games. The Blue Devils are now 9-3 against the Hokies under head coach Mike Krzyzewski.
• After falling 64-60 to the Hokies in Cassell Coliseum last season, the Blue Devils came away with a 15-point victory in Blacksburg. Duke has lost to just one team – Wake Forest in 2004 & 2005, and again in 2008 & 2009 – on the road in back-to-back seasons since the 2003-04 season began.
• With sophomore forward Josh Hairston making his first career start tonight, Coach K has used seven different starting lineup combinations in the last nine games. Mason Plumlee is the only player to have started every game during that span. Plumlee has started 43 consecutive games.
• In a game that featured the ACC’s top two three-point shooters, Duke’s Ryan Kelly topped Virginia Tech’s Jarell Eddie by finishing 2-of-4 from the three-point line and 15 total points. Eddie went 0-of-5 from three-point range and scored just six points. Entering the game, Eddie led the ACC in three-point shooting percentage (minimum 50 attempts) with a .493 (37-of-75) mark, while Kelly ranked second with a .472 (25-of-53) percentage.
• The Blue Devils held Eddie without a three-point field goal for only the sixth time this season. Eddie had connected on a trey in 12 of the Hokies’ last 13 games.
• Virginia Tech, which ranks 45th nationally in scoring defense, is the seventh opponent that Duke has faced this season that ranks among the NCAA’s top-50 in that category. The Blue Devils have are 6-1 and have outscored each of those opponents’ defensive scoring averages in those games.
• With the score tied at 21-21, Duke embarked on a 17-7 scoring run over the final 7:13 of the first half to stake a 38-28 lead. Kelly scored seven points for Duke during that run, hitting a layup and a dunk on consecutive possessions and then knocking down a three-pointer to increase the lead to 32-23. The Blue Devils maintained a double-digit lead the rest of the way.
• Duke held Virginia Tech without a field goal over a 5:40 minute span from 8:15 to 2:35 in the first half.
• Duke continued its improved free throw shooting, finishing 13-of-16 from the line. The Blue Devils have shot 75.0 percent or better from the free throw line in six of their last eight games.
• Duke forced Virginia Tech into committing 13 turnovers while holding the Hokies to five assists. Duke amassed 12 assists and made only seven turnovers.
• With 33 rebounds to Virginia Tech’s 29, the Blue Devils outrebounded their fifth straight opponent. Duke holds a +3.3 rebounding margin per game.
• Duke improved to 9-2 when playing outside of Cameron Indoor Stadium this season.

Seth Curry
• In a return to Blacksburg, where his father Dell starred for the Hokies from 1982-86 and went on to play 16 years in the NBA, Curry scored 11 points on two field goals and a perfect 6-of-6 performance from the free throw line.
• Extended his consecutive made free throw streak to 14. Curry ranks second in the ACC with a .887 free throw shooting percentage. That would rank sixth on Duke’s single-season leaderboard if he can reach the 100 made free throws threshold.
• Defensively, helped to hold Virginia Tech guard Jarell Eddie to just six points and an 0-of-5 performance from the three-point line.

Andre Dawkins
• Hit his only three-point attempt of the game. Dawkins leads Duke with 50 three-pointers on the year.

Josh Hairston
• Made his first career start and played 15 minutes.
• Scored six points on 3-of-6 shooting. Threw down his second dunk of the season on a second-half alley-oop from Austin Rivers.
• Also contributed three rebounds, including two on the offensive end. On the season, Hairston has more offensive boards (20) than defensive (13).

Ryan Kelly
• Scored in double figures for the 15th time this season and the fifth straight game. Kelly is averaging 15.0 points per game during that streak.
• Improved his team-leading three-point percentage to .474 by shooting 2-of-4 from three-point range. Kelly leads the ACC in three-point percentage (minimum 50 attempts), surpassing Virginia Tech guard Jarell Eddie whose shooting percentage fell to .463 (37-80) with an 0-for-5 performance tonight.

Mason Plumlee
• Made his 43rd consecutive start. Duke is 36-7 during that 43-game streak.
• Recorded two blocks, increasing his career total to 126. Plumlee ranks ninth on Duke’s all-time blocks list, trailing Josh McRoberts (2005-07) by two blocks for eighth place.
• Scored in double figures for the 15th time this season and the third straight game. Plumlee has scored at least 10 points in four of Duke’s six ACC games.

Austin Rivers
• Scored in double figures for the team-leading 18th time this season and led Duke in scoring for the team-leading ninth time.
• Knocked down a career-high four three-pointers, finishing 4-of-6 from three-point range. Rivers hit three of his treys in a row.
• Dished out a team-leading five assists while committing just two turnovers. Rivers has 13 assists over his last three games, averaging 4.3 helpers during that span.
• Had his most efficient shooting performance of the season, finishing 7-of-11 from the floor and 4-of-6 from the three-point line. The .636 shooting percentage from the floor was the highest mark of his career.
• Matched a career high with five rebounds. Rivers has grabbed at least three rebounds in five consecutive games.