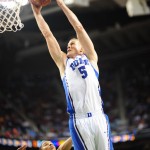 It's time of year again when every team in America (well, those that are still playing) is in the same boat.  You win, you advance or you lose and you go home.  The stark reality of that  makes for a bundle of emotions and nerves.  Thankfully for Duke fans, Coach K is at the helm and this obviously will not be his first dance.  But the road will be a tough one.  BDN starts our tournament coverage today with the latest edition of our Duke Basketball Notebook.

The last thing I wanted to do was whine about the Blue Devils' seeding yesterday, but once the pairings were announced, I was like, "you've got to be kidding me." But it's not worth a lot of time at this point, because there are no words or actions that will change a thing and to get too caught up in it will serve no purpose moving forward. The Midwest field is loaded.  I could point to all the teams and All American players in the region, but you've probably already heard all of that. So let me just say that a Louisville vs Duke matchup, should it happen, is a Final Four quality game at worst. In fact, in my opinion Midwest #3 seed Michigan State could feasibly beat all four of the top seeds in the West Regional on a neutral court and none of them would be an upset. In short, the committee did Duke no favors.  While they claimed to look at a lot of factors in making their seeding and bracketing decisions, is seems their criteria were only loosely applied when it came to Duke. Over the course of this season, Duke faced a brutal schedule.  Yet when at full strength, the Blue Devils lost a single game. Where is the reward for that?  Why should this team have to play a rematch with a Louisville team which is the overall #1 seed, just to get to the Final Four, if Duke gets that far?  Ridiculous.

I wouldn't give you a wooden nickel for the various talking heads' predictions this time of year. I have never been one to give too much weight to the "What have you done for me lately" bit. I didn't pick N.C. State, the pre-season favorite, to win the ACC as the media did, nor will I make too much over Duke's one untimely loss to Maryland in the ACC Tournament. Now that the parings have been announced, none of the so-called experts are giving Duke a chance, which Coach Krzyzewski may use as a motivator heading to Philly. But before the loss the Maryland, those same talking heads were close to naming Duke one of the teams to beat for all the marbles. Well, guess what? They still are a team to beat and their body of work shows they are capable of beating anybody anywhere.  The fan part of me is loving the Blue Devils flying below the radar in a world which seems to think you're only as good as your last game.

Albany and the next game if you win, forget about the rest

It would not shock me if there were some grumblings within the program when you compare the Midwest bracket to the West, but you can bet that Krzyzewski and company are only focused on Albany and the winner of the Creighton vs. Cincinnati game. First things first for Duke. The Blue Devils should handle Albany and I am not taking them lightly, but I do not expect a Lehigh upset here. The next game will be very competitive and both Creigthon and Cincy offer different challenges, each a stiff one. We'll talk more about that later in the week.

- Duke has never played Albany in the NCAA Tournament.

- Duke is undefeated at 4-0 in the state of Pennsylvania in NCAA play.

- Duke is 79-24 in th NCAA Tournament under Mike Krzyzewski. This will be the Blue Devils'  37th overall appearance in the tournament.