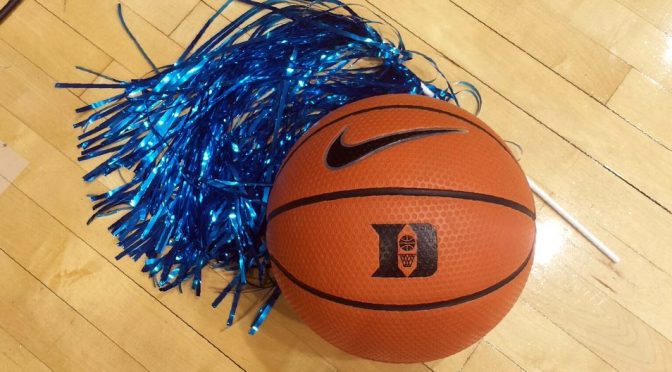 There was an NCAA type intensity in the Duke loss to Virginia yesterday.  It is true that the Blue Devils had the home advantage which makes the Virginia Cavaliers win even more impressive.

After the dust cleared Virginia moved to 20-1 on the season solidifying their ranking.  Their coach, Tony Bennett, said that his team knew exactly who they were as a team.  He inferred that his squad knew their roles and played as one on the court, not caring who takes the shots.

On the other side, Duke lost a game on Coach K Court in Cameron Indoor Stadium which is rare.  They pretty much allowed Virginia the regular season crown by not taking care of the business at hand.  That means, one goal is all but done -- that being the regular season ACC crown.

Unlike Virginia, Duke is a young team that is trying find their stride.  The Blue Devils, while good, are not playing like a well oiled machine just yet.  And that is a fact, despite a starting lineup that is playing exclusively together.

On one hand, it is still early in the season with ten regular season games left.  On the other hand, the staff needs to push the right buttons and start to see results and togetherness.  With injured players Marques Bolden about to enter the fray and Javin DeLaurier starting to get healthy, team chemistry will be a challenge.

That is the keyword, right there.  Chemistry.  For this team to make great things happen, it has to improve.  Yes, Virginia is the best defensive team in the nation.  But the 16 turnovers Duke committed in the game was far too many.

Countless times, Duke tried to pass the ball through defenders or they would passes were not properly anticipated.  Meanwhile, the Cavaliers have just five turnovers and shoot lights out from the free throw stripe.

The game plan to beat Virginia is to not beat yourself with turnovers and bad shot selection.  Missed front ends of one and ones helped doom the Blue Devils as did not playing smart when the game was on the line.  You must value every possession.

The Duke defense was not that bad.  In fact, the team, at times, looked great in that area.  But Virginia would find just enough spacing to launch some timely three pointers.  And this happened despite the fact that making their guards dribble or penetrate while limiting space is the way to go.

The Blue Devils looked dead in the water at the half.  And perhaps they dug too deep of a hole to climb out of.  But after a raucous comeback, where they took the lead came some untimely carelessness.

In short, the opportunities were there but the team could not execute well enough at crunch time for a win.  And that points to questions.  The main one being, can this team turn the corner in short time and play with more rhythm and better chemistry.

Maybe this is the way it will be with a young team. But Duke is immensely talented and capable, despite its youth.  Duke had dominate performances from Marvin Bagley III and Wendel Carter Jr. which felt wasted.   The teams guards were not consistent nor effective as a group, especially in some of the mental aspects og the game.

While there is no particular blame for the loss, there is concern with the back court.  Gary Trent seemed to get back to the way he was playing before the loss to N.C. State instead of allowing the game to come with him.

Despite leading the league in assists, Trevon Duval made a very untimely pass into the teeth of the Virginia defense late in the game.  It was a deflating turnover which was majorly risky.

As for Grayson Allen, he did not seem like himself in the loss.  Nor has he of late where his offensive output has been streaky  at best.  And in this game, his other stat lines were not making up for his sudden shooting woes.

Another thing which from my non coaching vantage seemed amiss, was that Duke allowed the Virginia defense to set up.  There were times towards the end of the game where the movement to take advantage of an unbalanced defense was not there.  And that had something to do with spacing and not putting game pressure on when you had numbers.

But credit Virginia.  They play a methodical and systematic style which causes players to doubt their instincts.  While Duke is the more talented team, Virginia was the most savvy group where they played older and wiser.

The good news is that there is time to get better for Duke.  The bad news is that the window closes each game out.  With March madness approaching the staff will need to see some better results.

At some point this team has to get on the same page and cut down on errors.  That potential efficiency can take this team far and maybe to the promised land.   But at this point in the season, as Mike Krzyzewski has said, they either will or they won't -- it is that simple.

The current reality is that Duke has little time to learn anything with Notre Dame visiting Cameron on Monday evening.  But perhaps the experience from top five showdown loss will spur them to a much needed win.