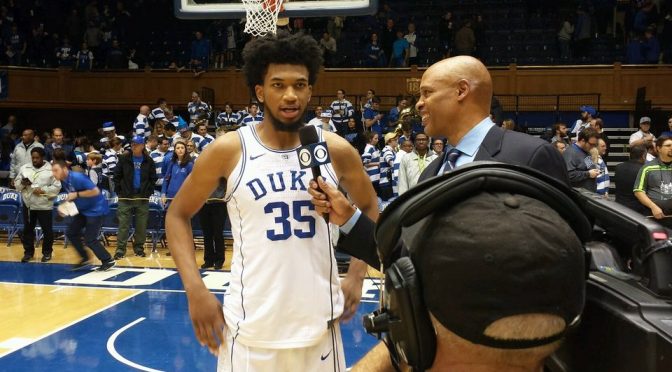 Welcome to the final regular season edition of my ten random thoughts on Duke Basketball.

Putting a loss in perspective

It amazes me how some fans will say the season is over after a single loss.  History shows us that most teams which make a deep run in March have some adversity during the season.   Just ask current Duke assistants Jon Scheyer and Nolan Smith what they went through before the 2010 title.    Duke lost a game to a hungry Virginia Tech team where a single play could have won the game.  Teams can learn some tough lessons and benefit down the road.

Duke-UNC Important in many ways

Duke is a lock to get a double bye in the ACC Tournament, but a win over North Carolina assures them of second place.  And that would be a good finish is in the toughest league in America.  The Tar Heels can be more damaged by a loss.  The reason is that they can fall out of a top four seed if the ball bounces right for other teams.  That will make for a hungry bunch.

Win it for Grayson Allen

Lets face it.  A loss to North Carolina would be devastating on senior day.  And not only that, a regular season sweep would mean a long summer for the fans and team pride.  Grayson Allen will be playing his final game in Cameron Indoor Stadium after a four-year career.  Winning this one for a player who gave his heart would be nice on many fronts.

But this will be other players last go round in Cameron, too

We all know that Marvin Bagley III and Wendell Carter Jr. will enter the NBA Draft due to their lofty draft status.  This will be these two players last game in Cameron as well and they should want to go out with a bang.  Here is hoping the dynamic duo has a great outing.  And for the record, depending on how the season unwinds, Duke will be losing other freshman early as well.

Defense has been good

Not to be lost by a close loss is the play of the Duke defense of late.  The Blue Devils have steadily improved by playing zone.  A good measuring stick for the defense will be the game with UNC which is one of the best offensive teams in the nation.

Now, the offense needs to catch up

It is strange how things work out.  Early in the season the Duke offense was unstoppable and the defense had holes to plug.  In their last two outings, the Blue Devils have been a tad clunky on offense.  There are many reasons for slowed production but none that cannot be worked out.  And that is good news for the team as all the games count from this point forward.

Duke will be fresh when they face North Carolina if they can avoid getting too high.  Campus will be a hotbed of activity as ESPN Gameday comes to town.  Duke was a tired bunch after the loss to the Hokies and they have finally been able to rest up.  That same break will also be big heading into Brooklyn and the ACC Tournament which will be well underway at this time next week.

Firstly, how awesome is it that he made the All ACC Academic team?  But the elephant in the room is the brutal criticism from Dan Dakich and others of late.  Duke is better with Marvin Bagley but the there is an adjustment period when a player comes back in the lineup.  Here is to Bagley using the chatter as motivation to be his best self the rest of the season.  I mean, he is likely to be the ACC's Player of the Year with a strong finish.  As for Dakich, I thought his comments were off base and unfair to Bagley or anyone else who would have been a recipient of a rant from out of nowhere.

Duke will have some very key prospects on campus this weekend.  More on that later.

I feel pretty good about where Duke is at this time in the season.  They have had some hard lessons on toughness but those have helped a young team grow.  I think we will see Duke at its best this Saturday.  One thing at a time.

My thinking is that Duke will land three players on the ACC All Freshman Team and a fourth will be very close in the voting.  I feel Bagley III will come away with the Player and Rookie of the Year awards.  Duke will likely have Bagley on first team and a couple of guys on second team or close.

Bold prediction?  Duke is about to go on a four game run.  That is if they treat each game like a fight.