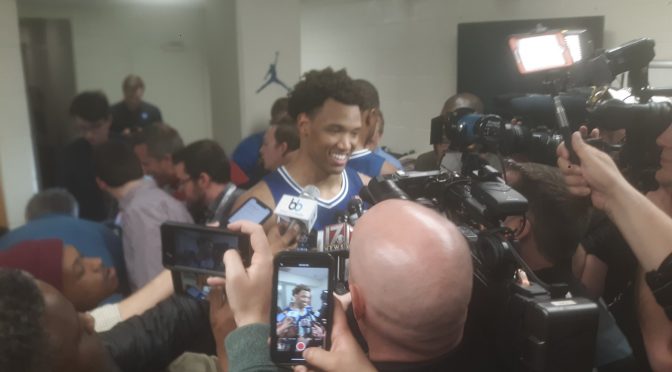 The Duke Blue Devils came away with a thrilling 98-96 overtime win over North Carolina in Chapel Hill early Saturday evening. Wendell Moore collected Tre Jones missed shot and rebounded the ball and put in a deuce before time ran out.

"It was an absolutely incredible game. To have an incredible game means yo have great performances by both teams and Carolina was outstanding, said Duke coach Mike Krzyzewski.

The Blue Devils were led in scoring by Tre Jones who scored 28 points with 6 assists and 3 steals. He was all over the place in the second half leading his team to a win. He earned the praise of Mike Krzyzewski saying he remained positive during moments of adversity and that helped to energize his teammates.

Jones had to miss a second free throw to help put the game into overtime and he did so as if he practices it all the time. "We talk about," said Krzyzewski. He continued, "Tre made not a good play, he made a great play, that was an amazing play."

Before the game, the UNC students cheered that Tre Jones was overrated. By night's end, everyone in the Dean Dome saw him a first-team All ACC lock.

The player who hit the winning shot, Wendell Moore Jr. grew up a lot from the experience. He ended the game with a double-double of17 points and a team-high 10 rebounds, and that last board to get to ten was a memorable one, as was his composure to sink the game winner.

Duke was set to cut into the North Carolina lead coming from ten back in the first half but a Joey Baker missed dunk seemed to sway the momentum back in the Tar Heels favor. By the time the teams headed to the locker room, the Tar Heels were shooting 60% from the field which allowed for a 9 point lead at the break.

In a year where the Tar Heels had struggled, players who had not been having banner seasons suddenly gained their confidence. Instead of going off recent scouting reports, Duke may have been better off studying the pre-season prognosis where the Tar Heels were ranked in the top ten.

Duke coach Mike Krzyzewski had preached rebonding and not underestimating your opponent but it was not working at the break. The Tar Heels held 22-14 edge on the board at the half.

The eventual comeback did not seem evident to start the 2nd half. Vernon Carey would foul out of the game with 18 points and then Cassius Stanley went out and there went his 22 points to the sideline. But on this night, Duke would show resilience and the final result would mean a win on the Duke Blue side. And, yes, this game was another instant classic in the Duke-UNC series.

The Blue Devils celebrated as they made their way back to the locker room but that celebration will be cut shorter than usual, The reason is that Florida State comes into Cameron on Monday.

The win pushed the Blue Devils season record to 20-3 and 10-2 in the ACC. The victory over North Carolina also means Duke has a chance to move into sole possession of 2nd place in the league.

In closing, it was an uplifting emotional win for Duke over North Carolina. And yo have to prop the Tar Heels for their best effort of the year and making Duke better moving forward.