The Kyrie Irving-less Duke Blue Devils coasted past St. Louis with a lockdown defensive effort and walked away with a 84-47 victory pushing their season record to 10-0.  Duke was led by their senior duo of Kyle Singlerand Nolan Smith who combined for 43 points, 11 rebounds and 5 steals.

Nolan Smith findng his comfort zone at the PG position

Nolan Smith played his second full game at the point guard position and he told BDN he was much more comfortable in the role in the lockerroom which you can hear via BDN audio shortly.  Smith tallied 22 points and a team high 5 assists to go withhis 2 steals.  The senior Smith took it upon himself to rise to the occasion today with his play.

Singler played like a senior as well grabbing a board or nailing a jumper when Duke needed one.  Singler told BDN he was really enjoying his senior season and that he looked forward to finishing it up with a bang.  We have some good audio with Singler coming as well.  Singler has now started 78 consecutive games at Duke and his 120 career starts ties him at 11th on the all time list.  Klyle passed Shelden Williams and Grant Hill on Duke's All Time Leading Scorers list in today's win.  His 3 steals were a season high.

Duke scored 31 points off turnovers and they continue withtheir emphasis on defense in the four December games.  Remember, we told you not one single Duke opponent would score in the 60's this month and thanks to the Blue Devils, they're making me a prophet.  Duke held the Billikens to 1 made three point field goal.

Duke freshman Josh Hairston scored his first career double figure scoring game at Duke with 12 points off the bench.  Add 4 rebounds and 2 steals and he had his best game in a Duke uniform statistically.  Interestingly, Josh was the program cover boy today and we'll have a nice one on one interview coming from the Virginia native tomorrow.  Duke Assistant Coach Chris Collins praised his effort in the post game press conference.

Duke Assistant Coach Chris Collins  filled in for Coach K today who had family matters to attend to and he was a natural.  Collins is never short for an answer and he bounces them back with little pondering.  It is plain to see that he will one day be at the podium as a head coach.

It's wait and see according to Collins and the powers that be will access his condition when the cast is removed.  No firm timelines have been set as of yet.  I still feel good about his return, call it a somewhat educated hunch, but it is nothing more than that.  Irving cheered from the sideline on his crutches and laughed it up with teammates as the game became out of reach for the visitors.

Miles dropped 9 points and snagged 9 rebounds which was just shy of a double-double.  We told you that Duke would take December to get Seth Curry and Miles going and so far, it is working out wonderfully for Miles.  Let's not forget Miles 2 steals either.  Meanwhile, his brother Mason got just 11 minutes of play and we look for him to get back in the groove when Duke takes on Elon nine days from now.

Next up, exams and Christmas break

Many students were studying for exams this week and it showed in the crowd, but the Crazies who were there did a good job of cheering.  The Duke players will now concentrate fully on exams before they get back to action on December the 20th in a game which even fewer students will be in the stands.  With the win over Elon, Coach K ties Dean Smith atop the All Time NCAA win list and that means he breaks Smith's  record in Greensboro on December 29th which is quite a milestone.  Have you got your tickets yet?  They're still available.

The Duke Blue Devils pushed their record to 9-0 with a 83-48 drubbing of Bradley despite the fact they are missing starting point guard Kyrie Irving.  After the game Coach Krzyzewski said the injury was serious and he would see specialist this weekend.

The soft spoken Andre Dawkins' play screamed on the court this evening as he dropped a career high 28 points and nailed 8 of 14 three point shot attempts.  He was just one shy of the record set by Shane Battier.  It was also Dawkins' first career start at Duke.  His 14 attempts from three were the sixth most in Duke history.

Mile Plumlee goes 7 for 7 from the field

Duke got Miles Plumlee going tonight as the Duke big didn't miss a shot going 7 for 7 from the floor tonight.  He pulled down 4 rebounds as well but his brother Mason led the team with 7.  One of the things Duke wanted to do in the December games was to get Miles going and tonights game went a long ways towards that goal.  Miles earned his second start of the year. 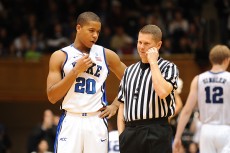 The Duke bench outscored their opponent 20 to 5 but in fairness the Braves have had some serious injuries.  Josh Hairston got some burn and threw down 4 points and Seth Curry added the same.  Duke also hope to get Curry going during the December games but he did have 4 assists and 4 rebounds both career highs.

Nolan Smith was 0-8 from the floor and 0-4 from the three point stripe but his 10 assists were huge and he was a big reason for getting Miles Plumlee going inside.  Smith's shot was off for sure, but he ran the team well and Duke dished out 22 assists to Bradley's 10.  Look for Smith to go off against St. Louis on the offensive end this Saturday.

Dual PG's to one PG

In the post game Krzyzewski mentioned that he had gone from having two point guards to having one and that effects their game plan.  If Irving's injury keeps him pout for long, Smith will turn into a pure point guard but let's cross that bridge when more results are in.  Duke should grow as a team in Irving's absence.

After Kyrzyewski's comments which you will hear in their entirety below, he mentioned that Irving's injury was serious and that he'd see the best of the best to evaluate his toe injury.  Keep in mind that Krzyzewski is going to take precautions with any player who has huge earning potential in the NBA even more-so than normal where he always watches out for his kids.  Expect widespread panic once the morning editions of newspapers hit but it'd be wise to sit back and not think the absolute worst.  Krzyzewski did say he could be out for the year but we'll take a wait and see approach and I, for one, am optimistic he'll be back in the new year.  Call it a hunch. Meanwhile, Duke has three games they should win left on the December schedule. 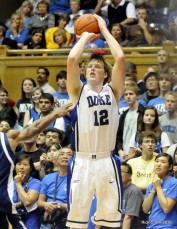 Okay, let's face it, we all knew Duke would beat Colgate, but would they play well with a game against Marquette looming next week?  The answer is yes, for Duke used a stellar second half effort where they went on an early 27-6 run and soundly defeated the Raiders 110-58.  That said, let's take a closer look at the win.

I assist, you assist

Kyrie Irving told me in the locker room that he has a little bit of a competition going with Nolan Smith in that they both want to produce double-doubles every night.  Well, they fell just short for they both had a mere 9 dimes each.   Any time you get that kind of production from your backcourt, you'll dominate any one.

Duke came up with 13 steals and created turnover opportunities which helped them to a whopping 40 points to their opponent's 5.  Duke held Colgate to 30.9% shooting from the field.  Krzyzewski has praised his defense early and often thus far, but we'll see how they fare against the likes of Marquette and possibly the 3rd ranked team in the country in Kansas Sate in Kansas City.

Ryan Kelly effective in 16 minutes as was Andre in 18

Kelly got his second start of the season and scored 9 points, a career high at Duke  to go with 5 boards, 2 blocks and 2 steals.  Dawkins?  He threw down a season high 16 points in 18 minutes.  But it was the two players defensive efforts and spacing which stood out in my eyes.

Miles started the game in a bit of a funk but he showed strong after the first half to the tune of 9 points, 8 rebounds, a monster block and a couple of steals.  Mason started the game faster and was effective as well with 9 points and 4 boards.  The two brothers play will be vital in Kansas City where they'll face seasoned competition.  Miles 3 steals was his career high.

You know a kid [Seth Curry] can score when he goes 1-7 from the field including 1-5 from the three point stripe and still scores 11 points.  That's because he got to the line 9 times and dropped 8 of them.  Duke shot 30 of 39 from the free throw stripe for the contest.

... only because Duke dominated.  He sat like the last 14 minutes of the game and scored 18 points and grabbed 9 rebounds, both team highs.  All that in just 22 minutes of play yall!  Kyle made his 71st consecutive start for Duke.

The students and or Cameron Crazies again earned Krzyzewski's praise and for good reason.  They have been great all year long and again, I have seen 35 years of them in person.  If they keep it up they'll be really hard to beat in the old girl otherwise know as Cameron Indoor Stadium.

It was a walk in the park but Coach K praised his team for coming out strong in the second half and not looking ahead.  We'll see what Duke is made out of this coming week where you can bet the bench will shorten significantly.  Duke is now 105-2 when they score 100 points or more under Krzyzewski.

And finally, here is Coach Krzyzewski's press conference in it's entirety -