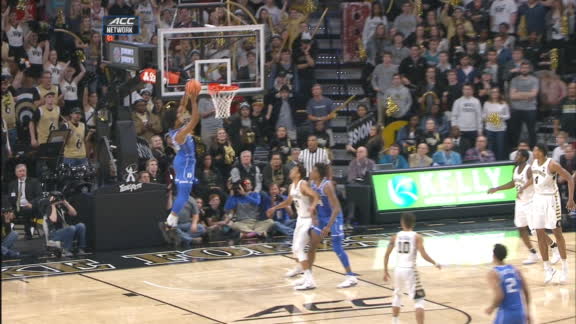 The Duke Blue Devils won their fifth consecutive ACC game with an 84-70 victory over Wake Forest.  With the win, Duke sets up an ACC showdown against Virginia this coming Saturday in Cameron Indoor Stadium.

The Blue Devils move to 18-2 on the season and 6-2 in the ACC.  Duke was led by a solid performance from Wendell Carter Jr. who had 23 points,  12 rebounds, 2 blocked shots, 2 assists and 1 steal.  It was Carters ninth double-double of the season.

Duke also got another double-double from Marvin Bagley III who finished the contest with 16 points, 11 rebounds and 3 steals.  "We are growing as a team and definitely getting better," said Bagley after the teams win.

The Blue Devils never trailed in this game.  They continued to play better defense, holding Wake Forest to 70 points where 11 steals played a big role.  Duke also had an impressive 30 points off turnovers.

Wake Forest would cut into the lead with a 10-0 2nd half run, but Duke was solid down the stretch on their way to an important road win.  Quite simply, Duke took care of its business and by doing that they remain in the ACC regular season race.

"I really don't like playing teams so close together and I definitely don't like Tuesday 9 games but our staff prepared us well for them," said Duke Coach Mike Krzyzewski.

Duke used Allen to run the team with Duval having an off game per Krzyzewski.  He also praised the play of Alex O'Connell off the bench who played 20 minutes in the game.  "I thought Alex gave us a lift offensively in the 1st half and defensively in the 2nd half with Trevon not playing well."

Krzyzewski said his team took some bad shots after a quick start to the 2nd half.  He said Allen ran the team well.

The Duke game against Virginia will tip off at 2:00 on Coach K Court.  The Cavaliers come into the game ranked 2nd in the nation and undefeated in conference play. 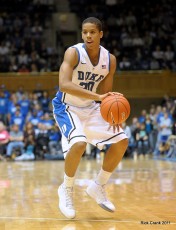 Duke was in control of the basketball game against Wake Forest from the opening tip as they coasted to a 91-73 victory.  Duke now sits alone atop the ACC at 4-0 but they will now prepare for a 3-1, hot Florida State team which invades Cameron in less than 48 hours.

The first half of the game belonged to Andre Dawkins who knocked down 21 points on 7 of 9 three pointers.  Dawkins earned the praise of Krzyzewski in his post game speech which just concluded. Dawkins failed to score in the second half.  Check out our interview with Andre per BDN Video.  Dawkins knocked down five straight three point shots and Dawkins has now scored 20 plus points in two consecutive games and this was his 9th double figure scoring game for the season.

Kelly went 8 of 11 from the field on his way to a team high 20 points to go with 10 rebounds.  His consistent play was a huge factor for Duke as they maintained a working lead the entire game.  Kelly has scored 20 points in two of his teams ACC wins and he scored in double figures for the 11th time this season.

Austin Rivers comes off the bench for the first time

Rivers started the game on the bench as Krzyzewski said he was checking new combinations, but maybe he should remain the sixth man if he puts up numbers like 20 points.  Despite starting on the bench with 32 minutes of playing time, he basically still was a starter.  His 3 of 4 from the three point stripe matched a career high.  Austin has now scored in double figures 14 times this season and he leads the Blue Devils in scoring.

Just too much talent for Duke

The Blue Devils held Wake to zero three pointers in the first half and just 3 all game long.  They also held the Wake bench scoreless at the half.  Duke ended the game with a 43 to 8 points advantage, thanks to the aforementioned Kelly and Rivers.  Duke held an 18-9 second chance point advantage as well and while they were outscored in the paint, that was due to their outside shots falling where they knocked down 11 three pointers.  The Blue Devils also dished out 17 assists tonight.

Duke extended it's ACC home court streak to 45 games and 64 straight against unranked teams.  This was the first game since March of 2010 that Duke had three 20 point scorers in one game.  Duke is 51-9 when ranked #4 in the country.  Four Blue Devils scored in double figures for the 11th time this season.