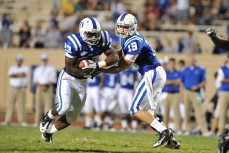 Happy Friday, Blue Devil fans! It’s been another tough week here at Blue Devil Nation, with the NCAA tournament wrapping up and early entrant season in full swing. Keep the faith, fellow Duke fans, there are bright days ahead. Is it football season yet? Not quite. But Football Friday is here to help you indulge your weekly football craving, and we’ve got big things coming up. [private]

We’ve got a big day coming up, Blue Devil Nation! Next Friday will be the last opportunity for most of us to celebrate the outstanding careers of two legendary Blue Devils. The men’s basketball banquet is always a special occasion, but this year, will take on special meaning for many, as we say goodbye to seniors Kyle Singler and Nolan Smith for the final time. It’s been a privilege to watch their careers and it should be another memorable night in Cameron, with a special visitor expected as well. And don't forget to check out BDN's Boo Williams coverage!

If that’s not enough for you, April 15 is a significant day for Duke football as well. For most of the spring, recruiting has been in a quiet period, meaning that the staff is unable to go out and visit prospects. That’s not to say recruiting hasn’t been in full swing, as the staff have hosted hundreds of prospects and their families on campus. From April 15 through May 31, you can bet the staff will be hitting the recruiting trail hard as they put together the class of 2012.

Duke hosted a group of prospects last weekend on campus, and among them was athlete Kedrick Davis from Charlotte. The trip was well worth the visit for Davis, as he picked up his first verbal scholarship offer from the Blue Devils, who are recruiting Davis as a receiver. Davis has been on campus for several visits already and it seems likely that Duke will remain a big player in his recruitment. A few other offers may be in the works, and we’ll keep you up to date with the latest from the staff and the prospects themselves.

As other prospects continue to come off the board, either through commitments or lack of mutual interest, several more scholarship offers will be extended over the coming weeks. Duke is working hard to land a defensive back or two this spring and has been after several elite offensive and defensive linemen. At running back, Duke did not make the top 12 for Raleigh’s Keith Marshall, the top running back in the class of 2012, but remain in consideration for Tarboro’s Todd Gurley and a few other backs. As we’ve mentioned previously, recruiting (and commitments) are most likely to peak this summer, as Duke will host several camps and written offers will go out August 1.

Blue Devil fans already got to see LB Jonathan Woodruff in the spring game, but he’ll soon be joined by several of his classmates on campus. It’s hard to believe the spring semester is starting to wrap up, and the first freshmen will report to campus on May 15, just over a month away. The new Blue Devils are excited to get on campus and get to work. This is a stronger class than many people think, and they are coming to Duke with the expectation to play in bowl games and win ACC championships.

We will continue to bring the best recruiting coverage around, but we’ll also start to transition into 2011 mode with some position previews and a look around the ACC. With all of the new faces on the sidelines and under center, there’s been a lot of activity in the ACC this spring and we’ll take a look at some of the headlines as spring practices start to wrap up.

I’ve kept this week’s Football Friday relatively short, as we’re really in the calm before the storm. With spring practice now behind us and the contact period in front of us, it’s been a good time to recharge our batteries and prepare for the summer recruiting rush, which will carry us right into the 2011 season. Speaking of the 2011 season, don’t forget to get your season tickets on GoDuke.com. After retooling in 2010, the Blue Devils are ready to take a step forward in 2011. We’d love to see you all out in Wallace Wade this fall, chanting WE ARE DUKE.