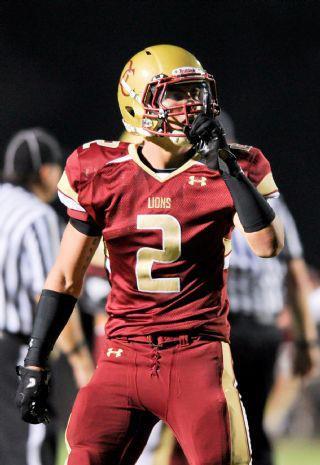 The Blue Devils are hoping to see one former Oaks Christian star light up the scoreboard in Wallace Wade Stadium this fall in receiver Blair Holliday. The Duke coaching staff is hoping that a current Oaks Christian star will light up Blue Devil opponents in the future. Cameron Judge is a 6'2" 210 pound linebacker prospect from Westlake Village, California. As a junior, Judge totaled 112 tackles, 3 sacks, and 2 forced fumbles, earning 1st Team All-Ventura County honors. Though it's early in his recruitment, the impressive athlete is hearing from a lot of schools, and the Blue Devils are giving him a long look. BDN caught up with Cameron last week for an update on his recruiting process. [private]

My athleticism, being a linebacker, it’s one of my strengths. Not many linebackers, I think, have my athleticism. I have a 39 inch vertical and I ran a 4.4 [second] hand-time 40 [yard-dash] yesterday. I feel like my athleticism is a big advantage for me.

I’m trying to put on some more size, gaining some more weight, I want to be like 220-225 [pounds] by the season start.

BDN: You play for a strong program at Oaks Christian; what are some of your goals for your senior year?

We’re moving into the PAC-5 this year for playoffs, it’s a big statement year for the entire school, so we just want to do our thing and try and win CIF in this new playoff division.

Academics is pretty important to me, so that’s definitely near the top of my list. And then also, like the environment, I want to be able to call the place home every day and feel happy there, amongst the players, coaches, and just the environment of the school in general.

I’ve been hearing from quite a bit of schools, I talk to Texas A&M quite a bit, Vanderbilt, Utah, UCLA, Oregon State, I hear quite a lot from those schools.

UCLA is actually the only one so far.

BDN: Do you have any plans to visit any other schools this spring or summer?

I haven’t planned any yet, but I want to get out and see some schools over the summer.

BDN: Being on the West Coast, you’ve got a lot of PAC-12 and other West Coast schools interested in you. Is location going to be an important factor in your college decision?

Not really, no, I’d be open to going anywhere at this point.

Yeah, I want to have a commitment made before the start of my senior season, but if I don’t have a decision made by then, I don’t want to rush it.

BDN: Thanks a lot, Cameron, and best of luck.

When Head Coach David Cutcliffe came to Durham, he vowed that he would transform the Blue Devils into a faster and more athletic team. In his first few recruiting classes, he has added several high-level athletes, including Isaac Blakeney in 2010 and Jamison Crowder in 2011. The coaching staff is looking to continue that trend in the class of 2012, and recently extended an offer to one of the top athletes in the country. Oshay Dunmore is an All-State quarterback from Newport, Oregon, who totaled over 3,200 yards and 33 touchdowns as a junior. In addition to his prowess on the gridiron, Dunmore stars in basketball and competes in the decathlon, where he ranks among the top in the country. Highlights from his standout junior year in football can be viewed here.

Note: Oshay Dunmore has since committed to Oregon.

Well, I play football, track, and basketball. In football, I was a spread offense quarterback, so I did a lot of read-option type plays and we ran a spread so I got to run a lot. My game’s still – a lot of coaches have kind of compared me to Cam Newton, maybe not exactly on that level, but that was my style. I have a lot more running, my passing game is a little bit of my weak side right now, so that’s coming along, I have a lot of camps coming up. I’m a pretty good runner, pretty agile, and I like the stiff arm, I’m about 6’2” 200 pounds so my height, length, and size gives me some advantages on the field. And for track I kind of do everything. I do decathlons and this weekend I had my first decathlon of the year and it placed me #1 in the country right now. I scored a 6290 and it was alright, it was pretty bad weather but it was a good mark to get out there for the beginning of the season.

Just some of my foot quickness and just speed and acceleration, getting stronger every day, working hard in the weight room. I’m just doing whatever I can to sharpen my game on the whole. But passing is one of the big things, not necessarily like – I have pretty good confidence and everything, it’s just more of my consistency with my throwing. I was pretty inconsistent this year, but that’s something that we’ve got a lot of camps lined up for. Just foot speed, strength, and just getting better as a whole football player.

I want to do track and football at the collegiate level, so anywhere that I’m able to do that is a big thing for me. I kind of like the big school atmosphere because I spent a lot of my life in the city, I grew up in Seattle for most of my life and then we spent 3 years over in Chicago, so I kind of like the big city, big environment with lots of diversity. I like kind of warm climate, a little bit of rain is alright, but yeah the major thing is letting me do track and football at a college.

Oregon was the first one to contact me with an offer and then the next day Oregon State offered me. Then later on during the week the University of Washington contacted me. Then at the beginning of the next week Duke offered me. Those are the schools that we’ve been in contact with a lot. We’ve talked to UCLA a little bit, Cal, and Princeton. Those are the big schools that have been in contact with me. I’ve sent some film to Texas, Alabama, Virginia, Virginia Tech, and Florida. Alabama gave us a little bit of feedback, but I don’t think the staff has really gotten a chance to watch it, but they let me know they got it, I’m just waiting on feedback from them now.

I’ve been able to go down to the University of Oregon and Oregon State, just because they’re here in my home state and so they’re not very far away, an hour, hour and a half max drive to go down there. I’ve been to a few games and talked to the coaching staff quite a bit for both schools, so those are the only ones I’ve been to.

BDN: Do you have any plans for additional visits or camps this spring and summer?

No, there’s not a lot. Just some passing league camps and a Nike combine I’m going to do. I think I’m going to go down to the Oregon camp they have there this summer, and then the majority of my summer will be taken up by track.

Yeah, I’d love to go over to the East Coast, but financially I don’t think I’ll be able to just fly myself out there, so if any schools were interested enough, I would like to take my official visits out there. I’m definitely interested in going out there, I just won’t be able to do it by myself.

I definitely want to take some visits, just to see some different environments, see what I like and make sure I’m making the right choice, it’s going to be the next 4-5 years that I’m going to be at this college. I want to take a few visits just to get some different looks at different places and see what I like best, where I’ll fit in the best, how I like the coaches and who’s going to be there to really support me in the long run. I think after I take a few visits I’ll make my decision, probably in the middle of my season next year for football.

I’m a hard worker and I’ll fit in where they need me to fit in.

BDN: Thanks a lot, Oshay, and best of luck to you.