The Blue Devils survived the pesky Hokies 60-56 to advance to the semi finals where they'll take on a talented Florida State team this afternoon.  In the process Duke tied the second longest streak of ACC Tournament victories at 10 consecutive wins.  The Blue Devils defense was the key against the Hokies, holding their opponent to 30.2% from the field.

Duke doubled the production of the Hokies in the paint by a 24-12 margin and their fast break worked as well to a 8 to 3 rate.  But Duke was just 5 of 26 from the three point stripe and that number must improve against Florida State.  The Blue Devils also benefited from going 15 of 18 from the free throw line and that was a huge factor in winning their 27th game of the season.

Tyler Thornton was a vital part of the win as well, despite missing several three pointers.  But the ones he did make were at key moments and he seemed to be there every time their was a loose ball, garnering 3 steals.  Austin Rivers led Duke in scoring wih 17 points and Mason Plumlee played very well scoring 12 points to go with 10 rebounds.

As I hinted to earlier, Duke went small just minutes into the game, rotating the the borthers Plumlee with Ryan Kelly sidelined for the tournament.  You can expect more of that today against the Semionoles winners over Miami.  This will be the rubber match between these two clubs and trust me when I say the Florida State fans travelled well here and they've let their presence be known.  Of course, Duke will have all the UNC fans pulling against them as well in that the Heels face rival N.C. State in t he opening game.

There is no doubt that the Duke-Florida State game is likely to go to the wire and it'll be a tense affair throughout.  The Blue Devils must keep a body on the Seminoles and hold their on in the paint while hitting a better percentage from beyond the three point arc.  So, pull up a chair if you think you can actually sit down during this game and root your Blue Devils on for they'll need the collective support from the fan base today.

Duke fans were a bit quiet in the arena yesterday and they'll need to pick up the support as well.  We'll continue to have post game wrap ups with exclusive video and photo galleries from Lance King, so bookmark Blue Devil Nation now and go up close and personal behind the scenes.  As for our prediction today, we'll take the Duke Blue Devils 66-64.

Ask any reporter who covered Duke tonight and they will tell you Tyler Thornton was the player of the game for Duke.  Thornton scored 13 points hitting key three point shots and making great defensive plays when they were most needed.  BDN made sure we caught up to Thornton with this exclusive interview. 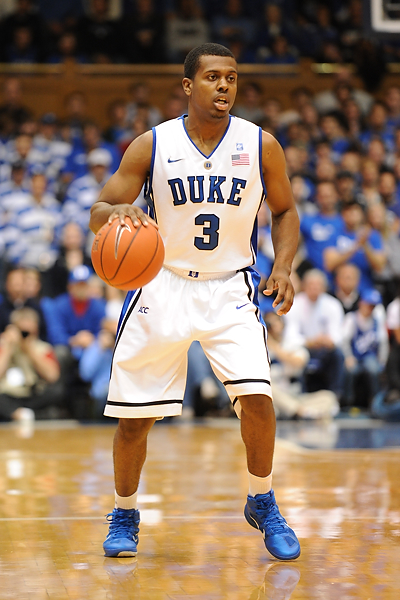 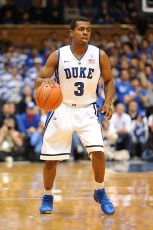 “Yeah, well we also just needed him. The really good teams that we have here, and we have had a lot of them. There are players on those teams that will fight whether they are fresh, medium or completely exhausted, and if you have a few of them or a team of them, then you might win a National Championship. We had five of them in 2010. Tyler is like that as long as Tyler is on the court. He just gives it to you. I really thought out of all of our players. He won’t show up stat wise, but just attitude wise, toughness wise, just what he was saying in huddles, on the court understanding game situations and encouraging his teammates. It was like a ‘Wojo’ type of performance. You don’t recognize the true value of player by his stats but by what he has done. I could talk a long time about that kid. Those things are what I think I value the most in coaching when a kid has that type of will and attitude. It is just beautiful.”  - Mike Krzyzewski on Tyler Thornton.  BDN brings you a one on one with Tyler -

Duke PG Tyler Thornton brings a calm to his team and that has earned him priase from Coach K who called the sophomore a "Duke Basketball player,"   which was a testament to his toughness and  his being cool under pressure. The Blue Devils face a stiff challenge in a hostile environment against Florida State and we caught up to Thornton to get his thoughts on the game in our latest BDN Video -

• Jon Sciambi (play-by-play) and Hubert Davis (analyst) will call the game for ESPNU.

• Duke is the only team in the NCAA to rank in the top 5 in RPI, Strength of Schedule as well as the AP and ESPN/USA Today Coaches Poll.

• The Blue Devils are currently 5-0 on the road in league play. Duke hasn’t won six straight ACC road games since the 2005-06 season.

• Duke and Boston College have met 15 times heading into Sunday’s game with the first meeting between the two schools coming on Dec. 21, 1979.

• The Blue Devils lead the all-time series 13-2, including a 9-1 ledger since Boston College joined the ACC.

• Duke has won four straight and 12 of the last 13 games in the series.

• Mike Krzyzewski is 12-2 at Duke against the Eagles, including a 4-1 record at the Conte Forum.

• Seven of the 10 games since Boston College joined the ACC have been decided by 10 points or less.

• All five games in the series that have been played at the Conte Forum have been decided by 10 points or less.

• Duke and Boston College have met twice in the ACC Tournament with Duke winning both games.

l The Blue Devils are 9-2 in ACC play and are one win shy of winning at least 10 conference games for the fifth straight season and the 20th time under Mike Krzyzewski.

l Duke has been ranked in the top 10 of the AP Poll for 89 straight weeks, the third-longest streak in NCAA history.

l The Blue Devils have had 10 or fewer turnovers in five ACC games and leads the conference with 10.1 turnovers per game in league play. Duke had a season-low five turnovers in Thursday’s win over N.C. State, including no turnovers over the final 13 minutes of play.

l Duke is 12-3 on the year in games decided by 10 points or less. The Blue Devils have five wins in ACC play by less than 10 points.

l The Blue Devils have held seven of their 11 ACC opponents to four three-point field goals or less. ACC opponents are shooting just 28.4 percent (44-of-155) from three-point range against Duke for the second lowest percentage in the conference.

l The Blue Devils average 25.1 points per game off the bench. Duke has gotten double-digit scoring from the bench in 19 of 26 games this season and the bench has scored 30 or more points in 10 games.

l Austin Rivers was named ACC Rookie of the Week for the seventh time overall and the fourth straight week on Monday. Rivers’ seven selections are the third most in ACC history, while his four straight selections tie three others for the ACC’s longest streak.

l Brothers Mason and Miles Plumlee combine to average 17.9 points and 16.3 rebounds per game this season. Either Mason or Miles has led Duke in rebounding in 24 of Duke’s 26 games. The duo has also combined for 19 double-figure rebounding games on the year.

l Seth Curry has scored in double-figures in five consecutive games and is averaging 18.6 points per game in that span. He is 16-of-37 (.432) from three-point range and is also averaging 4.4 rebounds per game in the last five contests. 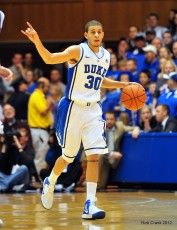 • The Blue Devils won their 20th game on Wednesday, marking the 16th consecutive 20-win season for Duke and the 27th season with 20 or more wins under Mike Krzyzewski.

• Duke and Kansas are the only two teams in the NCAA to rank in the top 10 in RPI, Strength of Schedule as well as the AP and ESPN/USA Today Coaches Poll.

• Duke and Maryland have met 172 times heading into Saturday’s game with the first meeting between the two schools coming in 1926.

• Duke has won four straight and 10 of the last 11 games in the series.

• Mike Krzyzewski is 52-21 at Duke against the Terrapins, including a 22-8 record at Cameron Indoor Stadium.

• Duke has won four straight home games in the series. The Blue Devils have a +20.3 scoring margin in that span.

• The two schools have met 18 times in ACC Tournament play with Duke posting an 11-7 record in those games.

l The Blue Devils have won 20 or more games 27 times under Mike Krzyzewski, including each of the last 16 seasons.

l Duke has been ranked in the top 10 of the AP Poll for 88 straight weeks, the third-longest streak in NCAA history.

l The Blue Devils are 60-3 at home since the start of the 2008-09 season. Duke has lost two of its last three games at Cameron Indoor Stadium.

l Duke is 10-2 at home this season and has lost more than two home games just once in the past 16 seasons.

l The Blue Devils have scored 80 or more points in a game 12 times this season. Duke has won 46 consecutive games when topping the 80-point plateau.

l Austin Rivers is coming off a 29-point, six three-point field goal effort on Wednesday against North Carolina. He has topped the 20-point mark in each of the last two games and leads the Blue Devils with six 20-point efforts.

l Mason Plumlee ranks second in the ACC in rebounding at 9.9 rpg. He has grabbed 12 or more rebounds 11 times this season including four of the last five games.

l Seth Curry is averaging 16.0 points while shooting 47.4 percent (9-of-19) from three-point range over the last three games.

l Ryan Kelly has increased his scoring average by 6.1 ppg. from a year ago and is tied for second on the team at 12.7 points per game. Kelly has scored in double figures 16 times this season after doing that just nine times in his first two seasons.

l Austin Rivers ranks eighth in the NCAA among freshman in scoring with a team-high 15.1 points per game. Johnny Dawkins was the last Blue Devil freshman to lead the team in scoring in 1983.

l Mason Plumlee is one of two players (joined by Keith Clanton, Central Florida) in the NCAA averaging at least 11.0 points, 9.5 rebounds, 2.0 assists and 1.5 blocks per game.

l Andre Dawkins has made at least one three-point field goal in 10 straight games. He is 27-of-64 (.422) from three-point range, while averaging 10.8 points per game in that span.