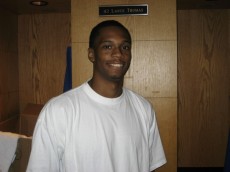 Georgia Tech is ranked #17 in the ESPN/USA Today Poll and #20 in the AP Top 25. Duke is #5 in both polls. The Yellow Jackets are coming off a 73-66 loss to in-state rival Georgia, while in their most recent game, Duke downed Iowa State 86-65 at the United Center in Chicago.

Duke and Georgia Tech have had one common opponent on the season in the Charlotte 49ers. Duke defeated Charlotte 101-59 in Cameron Indoor Stadium, while Georgia Tech won 76-67 in Charlotte.

The Yellow Jackets will be the third straight test for Duke's frontcourt. Duke's big men passed the first two tests with flying colors in wins over Clemson and Iowa State who both feature quality inside players in Trevor Booker and Craig Brackins. The difference in this game is Georgia Tech has three talented inside players in Gani Lawal, Derrick Favors, and Zachery Peacock.

Freshman Derrick Favors (6'10" 245) averages 12.1 points and 8.8 rebounds per game. Favors is tied for 4th in the ACC in rebounds. In a recent article at Basketball Prospectus, Favors was ranked as the 7th best freshman in the nation.

Senior Zachery Peacock (6'8" 235) averages 10 points and 4.6 rebounds off the bench for the Yellow Jackets. Peacock has the ability to step out to the perimeter and knock down jump shots. He is making 47.6 percent of his 3-point attempts on the season.

Sophomore Iman Shumpert (6'5" 205) is back after missing six games with a knee injury. He averages 8.4 points and 3.8 assists per game, but also turns the ball over 3.3 times per contest. In the loss to Georgia, Shumpert recorded one assist and five turnovers.

This Georgia Tech squad is very talented and a better team than the one which finished last in the ACC last season. However, they are not good enough to beat the Blue Devils. This will be a tough match-up and winning on the road in conference is never an easy task, but the Blue Devils should leave Atlanta with an eight to ten point victory in the books.