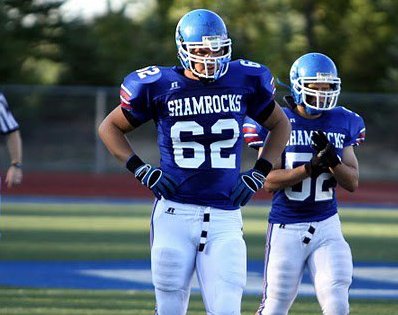 While Duke is working hard to improve their defense on the field this spring, the coaching staff is also working hard to upgrade the defense with a talented group of prospects in the class of 2012. Several defensive line prospects have received verbal scholarship offers from the Blue Devils, including one of the top prospects in the country, who took a visit to Duke this spring. Matt Godin is a 6’6” 260 pound defensive lineman from Novi, Michigan. As a junior, Matt helped Catholic Central to a 9-3 record, totaling over 50 tackles. The versatile and athletic lineman is the type of prospect that Duke is targeting in the class of 2012, but the Blue Devils will face competition from Big 10 powers such as Michigan, Michigan State, and Wisconsin, all of which have also offered. Highlights of Matt’s junior year can be viewed here.

My strengths, definitely my quickness off the ball, and then my swing move.

BDN: You’ve played well both inside and outside in high school; do you have a preference for where you would like to play in college?

Just overall getting stronger and just keeping my quickness up too, so doing speed training and stuff.

Education, and like the overall feel I get from the people around me when I go there, and just like the tradition.  I mean, there’s got to be a solid foundation at the school.

BDN: Since you mentioned education being an important factor, is there a particular field you are interested in studying in college?

Actually right before you just called, I got off the phone with Coach Cut[cliffe] over at Duke, and then – mostly just the schools that offered me, I’ve been talking to the most.  Cincinnati, Syracuse, Michigan State, Duke, and Buffalo, and then schools that haven’t offered me I’ve mostly been talking to Wisconsin, Oregon, Northwestern and Illinois.

Michigan State, Duke, what else?  I went to Michigan a few times, I went to Iowa last year.  That’s about it.  Oh, I went to Northwestern.

I was impressed with Northwestern, Michigan State, and Duke.  All of those 3.

BDN: Was there anything specific that stood out to you about those programs?

I mean, I’m not – not anything specific.  Obviously the facilities for all of them were nice, and I like the coaches from all those 3 schools.  Probably Duke and Michigan State though, the coaches and just the feel I got from them, kind of stood out the most.

Distance from where the school is doesn’t matter to me.  If I like the school, I’m gonna go.  And I have no favorite.