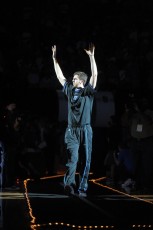 With the summer heat upon us, many are vacationing at favorite destinations or kicking back in their air-conditioned homes, trying to stay cool.  But if you are a Duke fan, it's hard to relax for too long without turning on your computer or smart phone for the latest updates.  When you have a basketball program like Duke to follow, things are always hot, and this summer has been a constant sizzle.

Along with assistants Chris Collins and Steve Wojciechowski, Duke Head Coach Mike Krzzyewski is hard at work in the dry Vegas heat, and they've settled on who will represent Team USA in the fast approaching Summer Olympics in London, England.  In case you missed it, here is the roster that was announced over the weekend.  While there is an admitted shortage at the center spot, this team is athletic, long, and quick.  While there are a number of high-profile players unavailable due to injury or other reasons, Coach K has nevertheless assembled a team of men who badly want to represent the Red, White and Blue, and that is extremely important.  BDN's Andrew Slater is on the scene in Las Vegas bringing you the latest; he will pay a visit to camp tomorrow and will provide his insights for members of BDN Premium, our extended subscription service.

The U-17 team representing our country rolled past all its competition in a display which truly reflected what teams can do when they play together.  Of all the American international teams in the past decade that I've personally seen, this team had perhaps the best chemistry.  No less than five players on the team have caught Duke's recruiting interest, including PG sensation Tyus Jones.  The kid will not wow you with his athleticism or with his frame.  But this stat sheet stuffer always gets it done on the court while playing with a cool beyond his years.  Jabari Parker also returned from an injury to help Team USA cruise to an easy win, and Jahlil Okafor was named MVP of the event after the team walloped Australia 95-62 yesterday to win the gold medal.   For more on Team USA's U-17 victory, go here.

BDN Basketball Recruiting Analyst Andrew Slater is battling the Vegas heat to cover the Lebron James Skills Academy, which is just loaded with prospects.  Julius Randle tops the list of interest for Blue Devil fans, but there are many more kids showing off their skill sets in front of the nation's top NBA and college scouts, in an event that winds down today.  Among the players who have the Blue Devils' interest are SF Semi Ojeleye, who told Slater his list would soon be trimmed to a more manageable number.  We are also taking another look at Marcus Lee, Andrew Wiggins, Austin Nichols, and the already committed Matt Jones.  Live reports from Vegas are on our Premium Message Board (for BDN Premium members) and more interviews are on the way.  As always, BDN pays close attention to the national recruiting scene as well, and we'll be sharing all the latest we've gathered from our extended network of sources.

For Duke fans, the Lebron James Skills Academy has been a debut of sorts for recent Mississippi State transfer Rodney Hood.  The sleek 6'8" newcomer has been impressive.  He gave Slater a wonderful in-depth interview, in which he shed light on many issues, including the one-and-done rumors that circulated after a former Mississippi State teammate's comments suggested the possibility.  Want to learn all the latest on Hood?  Join BDN Premium and you will get just that, with this detailed and informative interview.  Here is the Welcome to the Hood piece from Slater.

Other Dukies shining in Vegas as well

Duke got a major shot in the arm when Mason Plumlee decided to return for his senior season, and the big man has been working all summer long on his game.  Plumlee seems more focussed, and we have the latest reports from firsthand views of him going up against the nation's best in Las Vegas.  And then there is Ryan Kelly, who has been working just as hard as Mason; we will unveil a revealing interview with the rising senior captain later this week.

N.C. Pro-Am starts back on Tuesday

The Pro-Am will kick back into gear this week, and several Duke players are expected to play, though it will be hit-and-miss for a bit.  With three players in Vegas and others committed elsewhere, it may be the end of this week or even into next week before Duke is represented in a big way.  Still, it will be nice for local fans to get a shot at seeing off-season improvements, and BDN will be in the house to bring you all the updates.  We have a long relationship with the promoters of this fine event, and we encourage everyone to head over for some serious summertime fun in one of the nation's top events of its kind.  Here is a link to the official site.

If you have read our past reports, you know that redshirt freshman Alex Murphy has  been having his way against the competition while playing for the Finnish National team.  Murphy has a good sense of humor and always jokes with BDN about our traditional lead-in, "This is .... with Blue Devil Nation."  I can tell you firsthand that Murphy is both excited and confident about this coming season, and that gives us reason to feel good right along with him as the summer unfolds and we look forward to Fall.

Okay, so a lot of players are invited here but we thought we would mention that Austin Nichols, a key Duke prospect, has confirmed that he will be in Washington. D.C. for the event.  We have a nice interview with Nichols on the way and, for the record, he earned high praise this weekend from our pal Dave Telep, who raved about his skills.

Not according to our own Andrew Slater, who was told by the ridiculously talented Canadian that he did not understand where those rumors came from, and that he was still wide open.  Wiggins also mentioned that the Duke staff had been calling his coaches.  Of course, you can learn more by becoming a member of our site.

We are under the century mark in the countdown to the start of the college basketball season.  Just sayin'.

In case you missed the news, former Duke star Kyle Singler is coming back from Spain and will ball with the Detroit Pistions this season.  He had one heck of a dunk recently.

We took a few days off last week recharging the batteries.  With renewed energy, BDN will soon be reporting live from a number of basketball recruiting events, and football will start to come into focus as well, with ACC Operation Football kicking off in Greensboro later this month.

In closing, we ask for your continued prayers for injured Duke football player Blair Holliday, who remains in a coma at UNC Hospital after a tragic boating accident.  We will let you know of any changes in Blair's status, and hope all continue to send their best wishes and positive thoughts to his family, while respecting their privacy.  Thanks.