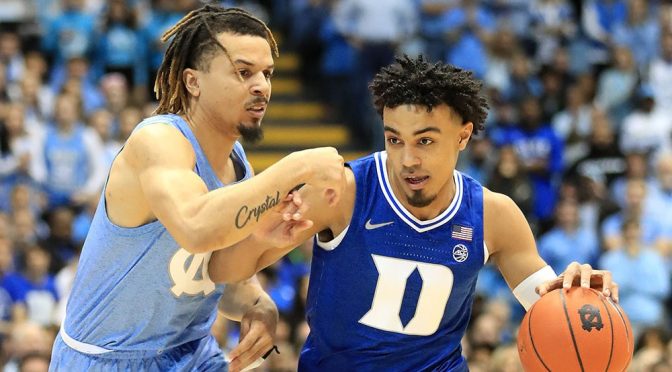 You cannot talk about the thrilling Duke overtime win over North Carolina without mentioning Tre Jones -- a lot. I mean, Duke Coach Mike Krzyzewski, Wendel Moore Jr., and Cassius Stanley all lauded his play in the post-game presser and they did so for good reasons.

Jones was dominant down the stretch doing everything one could ask of the teams leader. His exploits to get Duke into overtime and then help his team pull out the win will live forever in Duke-UNC rivalry lore.

His teammates praised his positive attitude when all hope looked dire before Duke made a miraculous comeback. Tre finished the game with 28 points, 5 rebounds, 6 assists, 3 steals, and the W.

Perhaps, his teammate Wendell Moore said it best, “It all started with Tre [Jones]. Tre had that look in his eye. When he had that look, we knew that we could follow him to victory. He led us there today.”

On his last shot of the overtime which he missed -

I missed and Wendell [Moore] pursued it. He got down low and was able to tip it out to Jordan Goldwire and saved the ball to me. I went up with a look and again, Wendell pursued it like he was doing a game and he got that huge basket.

On if he thought the team stole the victory -

No. Not at all. I feel like we earned this one. Things were not always going our way necessarily bt we continued to just ground it out. We never gave up and I think we earned and came out with the win.

What were you thinking when you got the ball in that situation?

Just get the shot off in time.

On the missed free throw... is that something you practice?

It is something I practice, yeah. Me and Scheyer [Jon, Duke Assistant Coach] actually talked about that in practice together. At the time it wasn't really serious but it helped tonight.