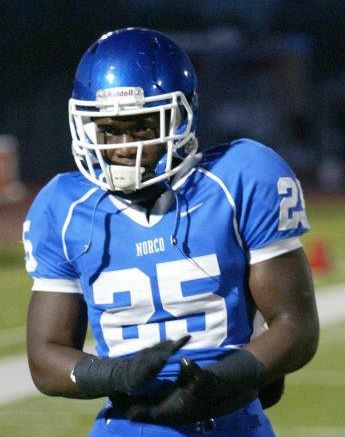 Duke Head Coach David Cutcliffe has built a reputation of producing NFL quarterbacks throughout his career. In truth, his offenses have produced nearly as many NFL running backs, including players like Jamal Lewis, Deuce McAllister and Arian Foster. This fall, the Blue Devils should feature one of their deepest backfields in recent years, headlined by senior Desmond Scott along with last year's leading rusher Juwan Thompson and speedy redshirt-sophomore Josh Snead. They will be joined by two outstanding freshmen in Jela Duncan and Shaquille Powell. Duke's running backs are utilized in all areas of their offense - rushing, receiving, and blocking.

Looking ahead to the class of 2013, the Blue Devils are looking to add to their running back stable, and were among the first to offer a scholarship to Joseph Ajeigbe. Ajeigbe is a 5'9" 195 pound prospect from Norco High School in California, the same program that has produced incoming Duke safety Corbin McCarthy. In addition to McCarthy, the Norco program is known for producing hard-nosed running backs, including former Stanford star Toby Gerhart and current Stanford sophomore Kelsey Young. As a junior, Ajeigbe took over the starting running back job and flourished, finishing with 20 touchdowns and 1,673 yards rushing.

The powerful rising senior spoke with BDN about his recruitment and his interest in Duke. [private]

Some of my strengths are probably my speed through the hole, and my strength, and I run with a lot of power. Maybe some areas that I need to improve on would be my break-away speed, but other than that, I have pretty good vision and pretty good balance.

I got offered by Arizona, that was my first offer, University of Arizona, and then a couple days after that, Duke offered me. Now, yesterday, or two days ago, I was talking to Coach Jerry Brown from Northwestern, We had like an hour-long conversation on the phone, they sound pretty interested, I think they’re going to offer me pretty soon. Around here, I’ve been talking to UCLA a lot, earlier I was hearing a lot from USC, I’m hearing from Boise State, Tennessee has been sending me a lot of letters and everything, talking to my coach. And then Cal – I’ve heard a lot from Berkeley, I’m pretty interested in Berkeley.

BDN: Which schools have you had a chance to visit or do you have plans to take any visits later this spring or summer?

UCLA and USC, they’ve been in contact with me a lot, so I went out to USC’s Junior Day, I think it was in February. I went out there and got to meet all the coaches and everything, and I like USC. A couple weeks ago, I went over to UCLA’s Junior Day, got to check that out, got to meet running backs coach Steve Broussard, we went over the offense and everything, he said he was interested in me as a player and said the next couple weeks they’d be in contact about maybe an offer or something. Other than that, I haven’t really been out to check out any other schools. I plan, probably in the summer, get on the East Coast and check out the schools that have been recruiting me like Duke, maybe get over to Tennessee, and then check out Northwestern.

BDN: You’ve obviously got schools all over the country that are recruiting you. How much of a factor will location be when you make your decision?

You know, I kind of want to keep all my options open, but I guess I would say location does play a pretty big part in it, UCLA and USC do catch my interest a lot, but I’m kind of open to anything at this point, so I’d be willing to go almost anywhere, but the closest schools, UCLA and USC, kind of do have my preference.

BDN: I know you have a teammate that will be heading to North Carolina to play at Duke this fall. How familiar are you with the program and what are your thoughts on Duke?

Yeah, Corbin [McCarthy]’s committed to Duke, so a couple months after that Duke started showing me some interest. I started looking into Duke as a football program, because I already know, well everybody knows that Duke is a good educational school, so I started looking at their football program. They’re doing some good thing in their conference and they’re trying to build a new program. I think it’s really cool to be a part of a growing program. The coaches, I’ve talked to Coach Lubick and Coach Loebner, they both seem pretty cool, they seem really interested to me as a player, and academics seem really big to them. Duke seems like a good program and I’ll have to look into that.

I kind of want to keep my options as open as possible, see how many scholarships I can get and keep considering and looking into schools that offer me. I might want to make a decision by sometime close to the beginning or the middle of my senior season just so I can know where I will be going by the end of my season. But for now I just want to kind of keep my options open.

BDN: Thanks a lot, Joseph, and best of luck.