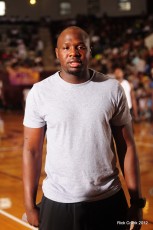 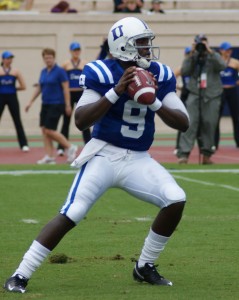 Senior quarterback Thaddeus Lewis turned in a strong performance in his final game, completing 28-of-48 passes for 387 yards and three touchdowns. For his career, Lewis totaled 10,065 passing yards to become the 60th quarterback in NCAA history to reach the 10,000-yard mark for his career, and the eighth this season. Lewis’ 67 career touchdown passes is also the second-highest career total in ACC history.

Receiver Donovan Varner finished the day with 11 receptions for 174 yards and two touchdowns. Varner caught 65 passes for 1,047 yards in 2009 to become just the third player in Duke history with over 1,000 yards receiving in a single season.

Both offenses dominated the first quarter as the two teams combined for 329 total yards and four touchdowns in the opening 7:39. Duke struck first, 1:04 into the first quarter on the third play of the day with a 56-yard touchdown pass from Lewis to Varner.

Wake Forest would tie the score less than two minutes later as Skinner hit receiver Devon Brown with a 28-yard pass on the Deacons’ fourth play of the afternoon.

The Blue Devils took the lead again, needing only 1:04 and three plays to reach the end zone. This time, Lewis found Kelly breaking through the middle for a 62-yard gain.

On Wake Forest’s following possession, the Blue Devil defense forced a punt, but a personal foul penalty gave the Deacons the ball back near midfield. Wake’s offense capitalized on the Duke miscue, knotting the score at 14-all on a 54-yard touchdown pass from Skinner to receiver Chris Givens.

The Demon Deacons took the lead for good early in the second quarter, covering 55 yards in eight plays. Skinner tossed his third touchdown pass of the game, again finding Brown for an eight-yard strike.

On Duke’s following possession, tailback Jay Hollingsworth rushed for two first downs to push the Devil offense across midfield, but Duke stalled in Wake territory. However, Kicker Will Snyderwine connected on a 51-yard field goal attempt, the longest of his career, and the Blue Devils trailed 21-17 heading into halftime.

Yet the third quarter would belong to the Demon Deacons, with Skinner throwing for 154 yards and two touchdowns in the period, including a 13-yard strike to tailback Kevin Harris and a 51-yard pass to receiver Marshall Williams.

Duke was able to add a field goal in the third quarter, but trailed 35-20 heading into the fourth. A missed Wake field goal gave the Devils the ball back, and Lewis punched the ball in from the one-yard line to cut Wake’s lead to 35-27 after an 80-yard drive.

But the Blue Devils could not narrow the lead any farther and Wake Forest would add a field goal and run back an interception to take a 45-27 lead late in the fourth quarter. Duke added another touchdown, a 21-yard reception by Varner, with 2:31 left in the game, but Wake Forest was able to run out the clock for win.

Duke fans have one more chance to see Thaddeus Lewis in a Duke uniform this Saturday against Wake Forest.  Lewis talks about his future and his glee in getting a diploma from Duke and much more in this audition interview.  BDN salutes Thad and the seniors and we will covering his last game from field level this weekend.  Come out and support some great seniors and help cheer Duke to a win and a 6-6 season.

Duke Hosts Wake Forest On Senior Day
Duke (5-6, 3-4 ACC) will host Wake Forest (4-7, 2-5 ACC) on Senior Day this Saturday, Nov. 28. Kickoff is scheduled for 12 noon (ET) at Wallace Wade Stadium. The game will be televised on Raycom Sports with Tim Brant calling the play-by-play, Rick “Doc” Walker providing the color commentary and Mike Hogewood on the sideline. The Blue Devils are coming off a 34-16 loss at No. 20 Miami last weekend while the Demon Deacons had a bye week and lost to Florida State, 41-28, in their last game.

Last Time Out
Duke led 16-13 heading into the fourth quarter, but Miami scored 21 unanswered points to come away with a 34-16 win at Land Shark Stadium. Thaddeus Lewis broke Duke’s career record for passing yards with his 303-yard performance. His top target was Donovan Varner who caught eight passes for 165 yards and one touchdown. Miami was led by Jacory Harris, who threw for 348 yards and two touchdowns, and Leonard Hankerson, who finished with eight receptions for 143 yards and one touchdown.

Duke-Wake Forest Series
Duke leads the all-time series between the two schools 53-34-2. The Demon Deacons have won the last nine games in the series. Duke’s last win was a 48-35 win in Durham in 1999.

Last Meeting
The Demon Deacons came out on top in overtime as Shane Popham made a 28-yard field goal and Alphonso Smith intercepted a Lewis pass in the endzone for a 33-30 victory. Popham finished the day with three made field goals while Riley Skinner threw and ran for a touchdown. Duke was led by Thaddeus Lewis, who threw two TD tosses to Clifford Harris.