There is nobody better than Duke Assistant Coach Chris Collins when it comes to an informative and entertaining interview.  Guys like Chris make my job easy for they are never short for answers and opinions and more importantly insight into the Duke program.  I caught up with Chris recently and we chatted about his Dad taking the Sixers job, what he is looking for with concerns to his future and of course, the national championship and next seasons team.  These are the kind of interviews you can expect as a visitor to Blue Devil Nation and a taste of what premium members get not only in the regular season, but the off season.  I hope you enjoy Chris's comments and that you bookmark Blue Devil Nation for great coverage on all things Duke.

Don't look now but a lot of Orlando fans would like to see JJ Redick take over for Vince Carter in tonight's lineup against Boston.  As it turns out when Redick is in the lineup the Magic are outscoring playoff opponents by 20 points.  On the other hand, when Carter takes to the court they are 22 points in the hole.  I doubt you'll see a change take place in the lineup this evening but make no mistake this has been Redick's coming out season.  Redick has raised his stock and jumped through a lot of hoops in Orlando and other NBA teams are taking notice.  It will be interesting to see how this plays out in the near future in that Redick is becoming a fan favorite while Carter is closing out his career as an underachiever.  Carter has always been a sensational athlete going back to his days at North Carolina, but he has never seemed to buy into the team concept.  I'll never forget my first impression of Vince Carter from back in the day when he was in Chapel Hill.  You can often see Duke and UNC players visiting local malls and there was a day when Carter strolled through the now defunct South Square Mall in Durham.  People were asking for his autograph and he signed them but never looked anyone in the eyes while acting like he had won the nations MVP.  The Tar Heels had just lost in the NCAA Tournament and Carter could only talk about how he would be in the NBA soon.  Perhaps that is why he came off the bench as a freshman under Dean Smith for he always seemed focused on himself.  His freshman campaign was a bust in Chapel Hill in that he came out of high school as one of the most hyped players in his class.  Carter didn't look any of the fans in the eye that day while signing and acted like a a guy who knew he was the man with his arrogant like demeanor.  By contrast, Antwan Jamison  accompanied him and was all smiles showing tremendous character and caring by mingling with fans and children. But the real key is Jamison talked team and returning to UNC to lead them to a title while Carter talked individualism.  People change, but Carter will retire without an NBA ring if he disappears tonight against an active Celtics defense.   Too bad he didn't learn any lessons from the affable Jameson nor did the highly hyped freshman start for Smith in his first season.  The reason for that was that the talented Carter wasn't a team first guy and he seemed to think his flashy dunks were proof enough that he should start.  But Carters troubles are Redicks gain for now and despite what happens in the future with Orlando, Redick seems to have his career at a point where he is taking off.  Carter is wrapping up his legacy and all he will likely have to show for it is scoring a lot of points not that there is anythiong wrong with that.  But in the NBA and at UNC, Carter was never able to help lead a team to a title.  For more on Redick and Carter, go to link from the Orlando Sentinal.

Bob Gibbon's Tournament of Champions kicks off this weekend in the Triangle where games are played on the campuses of Duke, North Carolina and North Carolina State.  The NCAA will likely pass a rule in the near future which would take tournaments away from major college facilities.  A lot of talents has passed through the TOC over the years including LeBron James and Greg Oden to name a few.  This may be your last chance to catch one of the premiere AAU events, so check out the action if you are in town for Memorial Day weekend.  Some of the Duke recruiting targets there include, Shabazz Muhammad, Marshall Plumlee and JP Tokoto.  BDN Premium will be on the scene to bring you our usual great coverage.

Another quick congrats to Doug Collins who is now the coach of the Philadelphia Sixers [76ers].  While Chris will be at Duke this season one cannot help but wonder if he will stroll the sidelines in the NBA one day.  During an in season press conference, Krzyzewski said he could see Chris in the NBA one day and I can too.  Chris is a good x's and o's guy and his lineage and familiarity with the league is a huge benefit.  Rumor has it that he watches just about every NBA game going when not serving Duke.  Chris of course will be in Las Vegas often helping Krzyzewski with Team USA.  Not saying Chris will not stick around nor that more colleges will not be calling, but it's not a stretch to think he will be coaching an NBA team one day.

INDIANAPOLIS - Duke Assistant Coach Chris Collins talks about recruiting Jon Scheyer and his days at Duke, playing for the national title, what Butler is all about and his coaching future with BDN. 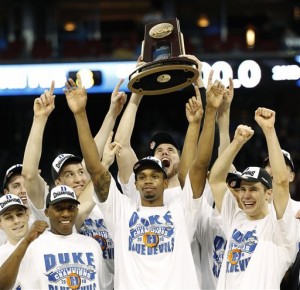 HOUSTON - The Duke Blue Devils are headed to their 15th Final Four after an amazingly intense battle with a game Baylor team.  BDN in the middle of all the action and we bring you and exclusive chat with a joyous Chris Collins as the players were cutting down the nets in the Reliant Center.  Stay tuned for a ton of coverage, but while we are working, enjoy this audio clip -

Join BDN Premium for full site access and discuss this amazing win with other members on our private message board.  Get off the fence and join as we travel to Indianapolis to bring you in person coverage every step of the way.

HOUSTON - Coach Krzyzewski is quick to tell you that his assistants, Chris Collins and Steve Wojciechowski, make up the scouting reports for future opponents, and it is no different with Baylor.  Both coaches checked out the Bears' easy win over St. Mary's last evening, and who better to talk to about the next opponent than Chris Collins himself?  BDN caught up with Coach Collins for a one on one chat about the game.